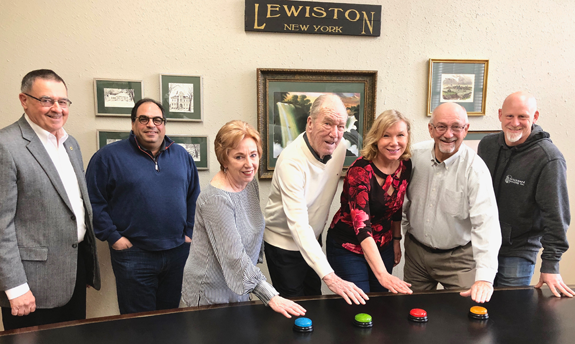 The “Lewiston Jeopardy” Tournament Beer and Pizza Night team captains met Tuesday to try out their buzzers in preparation of the upcoming fundraiser for the Historical Association. The event will take place at 6:30 p.m. Saturday, April 27, inside the Brickyard Brewing Company on Center Street.

From left: Ken Slaugenhoupt, Historical Association of Lewiston president; Jeff Williams, one of the presenting sponsors; and team captains, Mayor Anne Welch, James Walker, Sandy Blackwell Yates and Bruce Sutherland. On the right is Eric Matthews, co-owner of the BBC and co-sponsor of the competition.

In addition to the teams, the audience will also get to participate for chances at cash prizes.