Gordon A. Williams, a local contractor, at 97 years of age passed peacefully in the presence of his daughters on March 29, 2019, after a short illness.

Mr. Williams was a graduate of Ellicottville High School. He attended Presbyterian College in Clinton, South Carolina, for one year.

A member of the Greatest Generation, Mr. Williams joined the Army Air Corp in 1942 and was a tail gunner on a B-17. He was stationed in Thorpe Abbotts, England, as part of the 8th Army Air Corp, 100th Bomb Group. During the Schweinfurt-Regensburg mission, his plane was shot down over Germany. He was captured and spent two years in Stalag 17B. Near the war’s end, he and his fellow prisoners were force-marched across Austria. Nightly, he would escape to find food for his fellow prisoners. He and his comrades were eventually freed by the arrival of Patton’s Army.

After the war, Mr. Williams and his brother, Richard, operated the business known as Williams & Williams Builders. They built many homes, apartments and commercial buildings throughout Western New York. They were involved in the creation of Fantasy Island.

Mr. Williams loved the outdoors, enjoying archery, fishing and waterskiing. He estimated that he taught over 100 people to waterski. Starting in his 50s, he took up downhill skiing and continued to ski into his 80s. 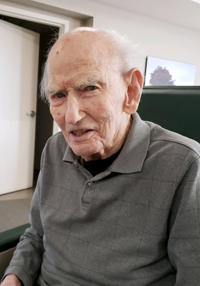