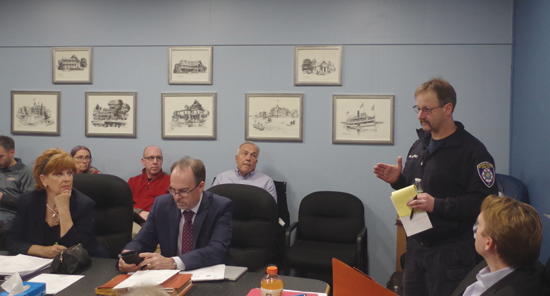 Matt Osinski of the Grand Island Fire Co. addresses the Town Board on the issue of fire hydrants in the town. (Photo by Larry Austin)

Town of Grand Island hears of need to upgrade hydrants

The Town of Grand Island is considering formation of a task force to address its aging water infrastructure and consider an expansive overhaul of hydrants.

Matt Osinski of the Grand Island Fire Co. sounded an early alarm at a Town Board work session Monday when he addressed the board about fire hydrant problem that are hampering fire service. Osinski told the board that when he was fire chief, the town had 21 alarms of fire during winter months, and of those 21, firefighters ran into frozen hydrants on nine occasions, “which is a pretty substantial amount for working fires,” he said.

“We need to look at how we’re going to address this moving forward,” Osinski said. “As time goes on, I think it’s going to become a bigger and bigger issue. By no means am I trying to throw anybody under the bus on this. I’m looking to the future of this town and how building is going and how fires are going with our aging homes. And then new houses burn a lot different than houses used to burn even 20 years ago when I got in this business.”

“It would require, obviously, replacing a lot of hydrants,” he said.

Town Supervisor Nathan McMurray suggested forming a task force including Osinski, Town Engineer Bob Westfall to address the issue. Westfall said Town of Grand Island has an ongoing capital replacement plan for its system to fix hydrants “a chunk at a time,” but could do more with more funding.

“You find the money, we’ll do whatever,” Westfall told the board.