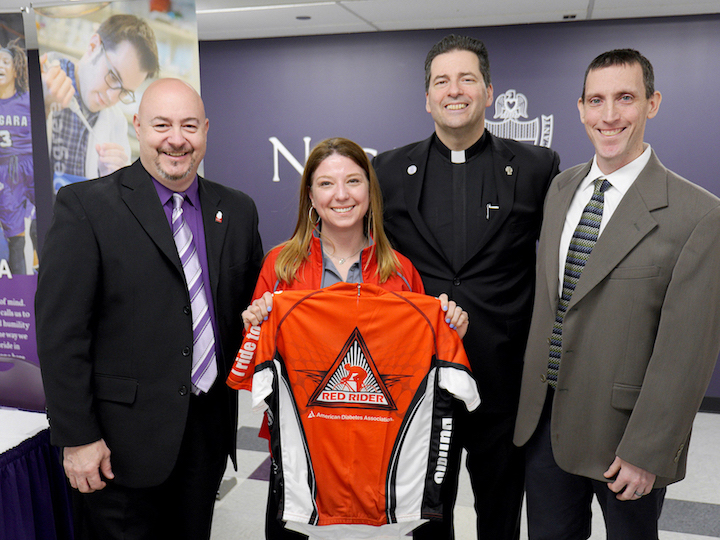 Niagara University will serve as the host site for the American Diabetes Association 2019 Tour de Cure event on Saturday, June 1. The new location was announced at an event at Niagara University on Tuesday morning.

The ADA invites riders, runners and walkers of all levels to join the celebration and be part of the movement to fight diabetes by taking part in Tour de Cure, a fitness and community event happening at Niagara University’s Dwyer Ice Arena. The activity will help raise funds to support the ADA’s mission to prevent and cure diabetes, and to improve the lives of all people affected by diabetes.

Every 21 seconds, someone in the U.S. is diagnosed with diabetes. In addition, nearly half of all American adults have either diabetes or prediabetes, which puts them at greater risk for developing type 2 diabetes. People with diabetes are at significant risk for serious complications, including kidney failure, heart disease, stroke, blindness and lower-limb amputations.

As the ADA’s premier fundraising event and one of the nation’s largest series of diabetes fundraising events, Tour de Cure brings together volunteers and participants invested in bending the curve on the diabetes epidemic and funding research to find a cure.

“Tour de Cure is more than just a ride, walk or run – it is a celebration of the ADA’s mission and a chance to raise critical funds to help fight diabetes. Every mile covered and every dollar raised brings us that much more support in fighting this disease that affects 100,000 people in our community,” said Stacie Waddell, ADA’s development director for Western New York. “The prevalence of diabetes is growing each year, and action is absolutely necessary to help us bend the curve on this epidemic.”

In addition to the traditional cycling ride, this year’s Tour de Cure event also features a 5K "fun run" as well as a 5K walk. People of all ages from around the region will form teams and gather at one of five routes to participate in the event.

There will be four cycling routes: 100-mile, 63-mile, 30-mile and 12-mile; along with a 5K walk and fun run. Volunteers are needed. For additional information, visit the event website at www.diabetes.org/buffalotour.

Tour de Cure is designed for participants of all fitness levels, with 10-mile routes for the occasional cyclist to 100-mile century rides for experienced cyclists, and a 5K that can be walked or run. Routes feature rest stops with food to fuel the journey and volunteers to cheer riders along the way.