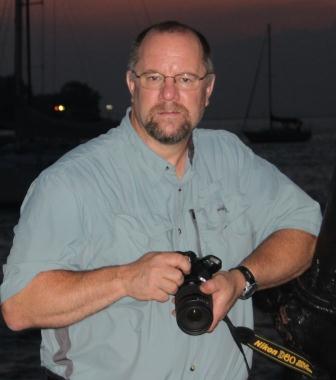 Raising Parkinson's awareness, bringing hope to those with disease

April is National Parkinson’s Awareness Month. Look for landmarks such as the Peace Bridge and Buffalo City Hall and even Niagara Falls to be bathed in blue lights on April 5, drawing attention to the neurodegenerative disease affecting nearly 1 million Americans and 10 million worldwide. Around 60,000 are diagnosed each year in the U.S., alone.

But a Youngstown man is dedicated to getting the word out year-round on the debilitating illness he’s been battling more than 15 years.

Robert B. Russell, 59, speaks to local high school health classes about his struggles, promising, “I don’t hold anything back.” He’s also been invited to speak to area service groups, like Lions Clubs, as well as churches and libraries.

“I talk about my symptoms, the medicines I take (55 pills a day), and the deep brain stimulation surgery I’ve had twice (2010 and 2017),” he said. “I show them a really neat X-ray that shows the wires going into my brain. It should be on the side of a Harley (laugh). The kids are glued to my conversations.”

When Russell revisits Lewiston-Port High School on April 11 and 12, he’ll be returning to a place he worked for a combined 27 years as media associate and stage manager. His illness forced his early retirement in 2011.

Russell is also slated to return to his hometown of Corning, addressing Corning/Painted Post High School on May 3.

The precise number of Western New York residents diagnosed with Parkinson’s disease is unknown, as statistics are at least a dozen years old, when the number 9,000 was cited.

“I tell people, ‘There are tens of thousands of people in this area affected by Parkinson’s – those with the diagnoses and their care providers,’ ” he said.

The foundation is a nonprofit that supports research, offers education and public advocacy related to the disease, and provides service, programs and support throughout the eight counties of Western New York.

The local chapter presents its 15th annual “A Night of Hope for Parkinson’s Wine Tasting” event from 6:30-9:30 p.m. Friday, April 26, at the Millennium Hotel, 2040 Walden Ave., Buffalo. It is its second-largest fundraiser behind its “Moving Day” event, scheduled for Sept. 21 at Erie Community College’s North Campus.

The April 26 evening will feature wines and foods, craft beer, locally distilled spirits and a wealth of basket auction items, with many silent auction items, as well. Tickets are $50 presale or $60 at the door. Visit parkinson.org/westernnewyork for ticket information or contact Jamele at 716-449-3795 or [email protected].

Russell may be contacted for speaking engagements at [email protected].