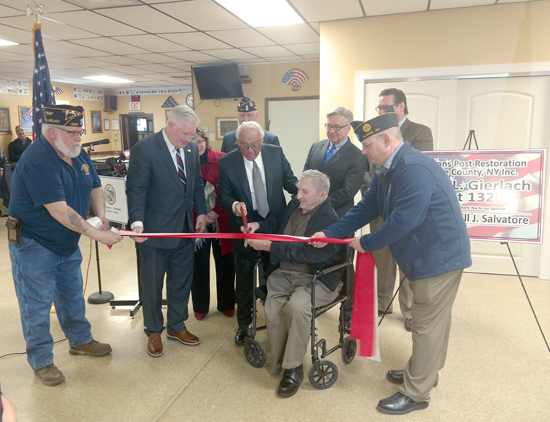 The Buffalo Chapter of the American Institute of Architects (AIA) announced it will begin an urgent handicap accessibility focus for veterans’ posts in Erie County.

Kenneth S. MacKay, president of the AIA local chapter, made the announcement during a press conference in the Frank L. Gierlach Post 1320. A ribbon was also cut to officially open the new handicapped-accessible restrooms inside the post – the cost of which was donated by Russell’s Steaks Chops & More founder Russell J. Salvatore, a philanthropist and veteran.

“AIA members will work on developing conceptual floor plans to properly define scopes and costs of the identified handicap accessibility critical needs at these posts,” said MacKay, who was joined by Robert E. Stark, past president of the AIA Buffalo Chapter.

They received certificates of appreciation by the Veterans Post Restoration of Erie County for this news and for conducting the first evaluation of all veterans’ posts through Operation Evaluation in 2015.

The Veterans Post Restoration (VPR) of Erie County NY Inc. is a not-for-profit comprised of American Legion, AMVETS, 40&8, Marine Corps League and VFW posts around Erie County working collaboratively to address shared needs. The goal, through Operation Appreciation, is to repair and upgrade these posts in order to pass them down to the next generation of veterans.

Some of the aging veterans, who are in wheelchairs or are disabled from loss of limbs, are limited by the lack of handicap accessibility accommodations at the posts.

VPR began when Erie County Clerk Michael “Mickey” Kearns was a member of the New York State Assembly and was approached by members of several veterans’ posts in the county with members concerned about aging buildings and lack of handicap accessibility.

Kearns, who secured $250,000 for an elevator for Post 721 as an assemblyman, is a volunteer member of the VPR advisory board. The veterans there have been raising money with their “Flag Fundraiser” by selling paper flags for a dollar each at the Erie County auto bureaus.

“This has been a long time coming for us and a tremendous result after the long hours we have been spending selling flags for $1 at the auto bureaus,” Kowalski said. “These veterans posts have been ignored for a long, long time, and it is wonderful to see results like we are this morning because of Mr. Salvatore’s gift.”

Last Nov. 11, a press conference was held to announce VPR achieved its first milestone of $10,000 from flag sales. Salvatore was invited and presented with a certificate of appreciation. During his comments, Salvatore surprised everyone by offering to donate $50,000 to make the Frank L Gierlach American Legion Post 1320’s restrooms handicapped-accessible for members and guests.

“We are so appreciative of Mr. Salvatore’s generosity, because now our members and guests with disabilities can use the restroom at the post,” Oakes said.

Members built the Gierlach Post in the 1970s. During the era in which it was constructed, there were not the same regulations as there are today for handicapped accessibility in public buildings. Today, a majority of Post 1320’s members are older and unable to repair or renovate the building. For many, it has been difficult or impossible to use the restrooms. As a result, members could not stay long for activities and functions.

Kearns added, “We are so thankful of the efforts of Russ Salvatore, for his continuous support of our veterans in WNY and we are so happy with the news from the AIA which will allow us to seek more funding to finally make these Posts handicapped accessible for all veterans. We are doing this because our veterans deserve better.”