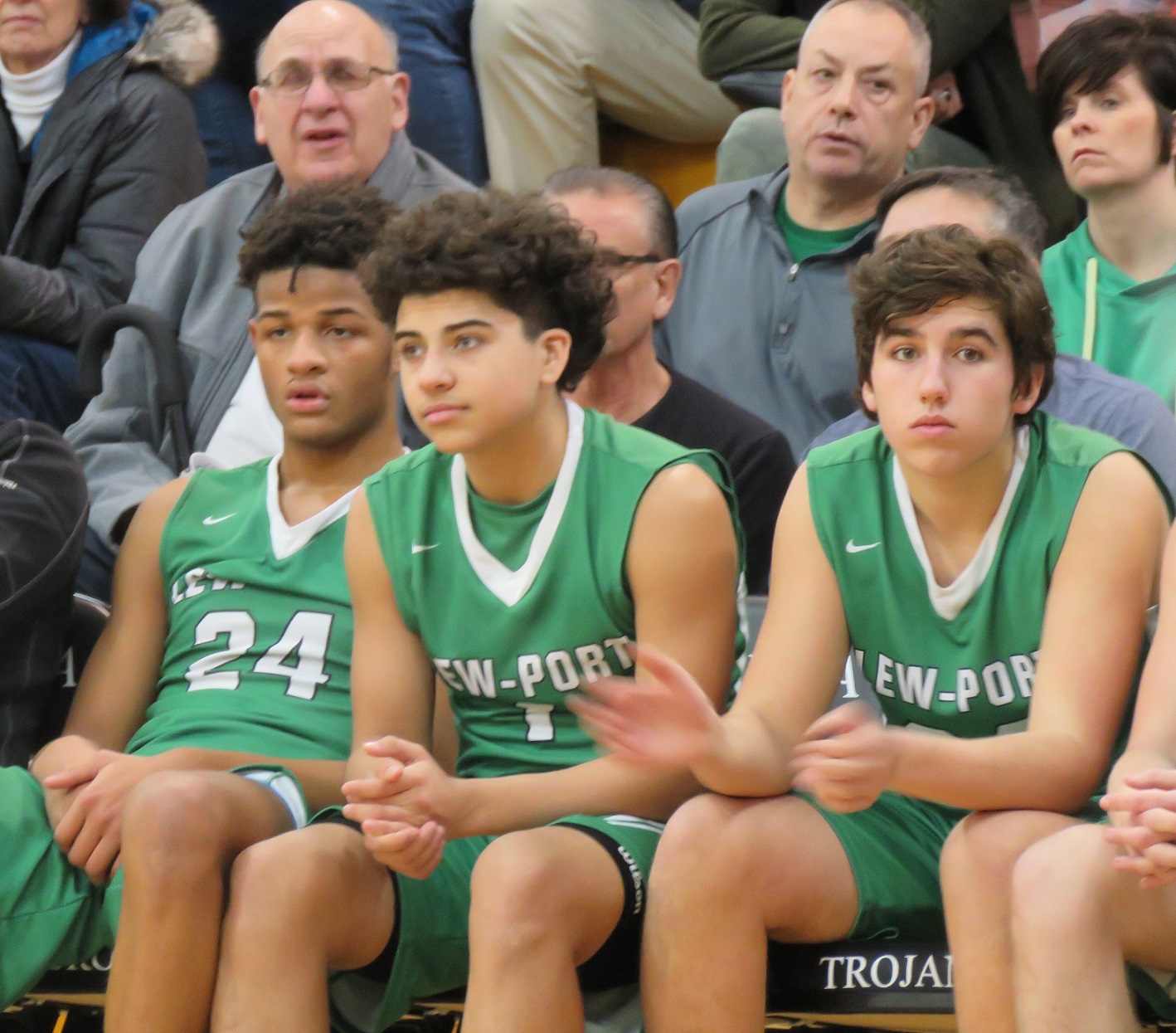 From left, Roddy Gayle, Jalen Duff and Jack Bernstein watch time tick down as the Lewiston-Porter Lancers were defeated by Pittsford-Mendon, 87-55. (Photo by David Yarger)

It had been the best season in 41 years for the Lewiston-Porter Lancers boys basketball team, but Saturday, the squad ran into a juggernaut in undefeated Pittsford-Mendon of Section V.

The Lancers historic season came to a close with an 87-55 loss in the Far West Regionals.

The Vikings controlled all but the first couple seconds of the game, as the Lancers only lead was 2-0, off a Zach Clayborne bucket.

The Lancers certainly played from behind after freshman sensation Roddy Gayle obtained his third personal foul in the first quarter. Gayle sat out a little more than half of the second quarter in result.

In the second, it looked as if the Lancers could possibly make a run via the 3-ball, as Jason Boslet nailed two 3-pointers, then Jack Bernstein nailed a trey. Despite the trio of threes, the Lancers still trailed, 29-22.

Defensively, the Lancers had trouble dealing with Mendon big man Dan Cook, who finished with 32 points and 15 rebounds.

Cook had 9 points in the final quarter on the way to a Mendon victory.

The Lancers had a unique moment in the final minutes, as coach Matt Bradshaw left senior Trent Scott in to try and score his 1,000th point. Needing a 3-pointer, Scott pulled up from the wing behind the arc and nailed a trey for 1,000. Bradshaw then subbed Scott out of the game following the bucket, and the two embraced with a hug on the sideline.

Scott, a three-year varsity player for the Lancers, finished the game and his L-P career with a team-high 14 points.

Scott was visibly emotional over the loss, but said the trey was a nice way to go out.

“It felt good,” Scott said. “I’ve put in a lot of hard work these past three years with the guys in the gym. There was a lot of stuff that I went through, so it’s a good feeling, would love to come out with the win, but everything happens for a reason.”

Of the 3-pointer by Scott near the end of the game, Bradshaw said, “It was nice. It was fitting that he got it on a three. He needed a three and he got it. Trent wasn’t feeling well and I just give him credit for coming out and putting forth the effort with the way he felt. He’s worked three years for this, so he’s a special kid, so we’re excited for what he does and we couldn’t be more pleased for a kid than I am Trent.”

Of Mendon, Bradshaw added, “That’s a team. They have a skill, they play the game the way it’s supposed to be played, they share the ball, they play great defense and they have tremendous athletes. They’re my prediction to win the public schools championship.”

For the Lancers, the season has been a historic one, as the team won its first Niagara Frontier League title since 1984 and first Section VI title since 1978. Bradshaw said the season was one that should be cherished.

“It a historical run for us. It hasn’t happened for us in 41 years. It’s going to take a few days to sink in what we accomplished as a community and as a team. It’s been a special run. It’s galvanized the community - I mean there’s people at this game that made the trek out here that I haven’t seen at a game all year. It’s just been amazing,” Bradshaw said.