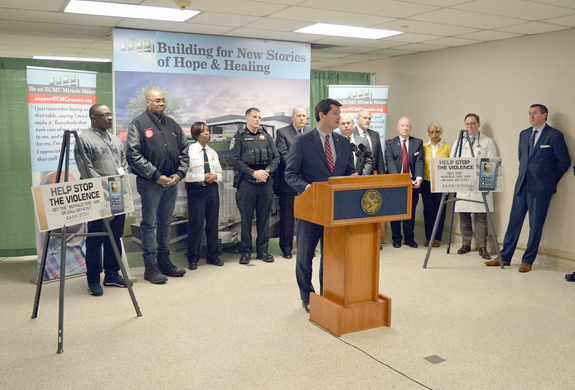 Erie County Executive Mark Poloncarz (at podium) is joined by elected officials, law enforcement officials, ECMC staff, community members and members of the Crime Stoppers board to announce a new initiative to reduce fatal and nonfatal shootings in Erie County.

$80,000 county investment will be used for enhanced Crime Stoppers rewards

‘Stop the Violence’ billboards premier March 11; will be placed in new locations every four weeks

Erie County Executive Mark Poloncarz on Thursday joined Erie County District Attorney John Flynn, Buffalo Police Deputy Commissioner Barbara Lark, Commissioner of Central Police Services James Jancewicz, and Crime Stoppers Buffalo Board Chairman Warren Clark to announce a new initiative to reduce fatal and nonfatal shootings in Erie County. The program, supported with $80,000 in Erie County funding, is a partnership between Erie County, the DA’s office, Crime Stoppers and the City of Buffalo. It will feature increased rewards for information leading to arrests and prosecution in crimes involving a firearm along with a new “Stop the Violence” billboard campaign.

During 2018, the City of Buffalo alone experienced 57 homicides and more than 200 nonfatal shootings. Of those 57 homicides, 45 were committed with a firearm.

“I proposed this funding in the 2019 Erie County budget as a practical way to work with partners in addressing gun violence in Erie County. This investment will increase safety in our community and also offset the extremely high cost of medical care associated with both fatal and nonfatal shootings,” Poloncarz said. “I thank District Attorney Flynn and our partners at Crime Stoppers and the City of Buffalo for joining us in this effort and leveraging our resources to better protect our residents.”

The DA’s office is supporting the initiative with $10,000 in funding that will be matched by Crime Stoppers and will be used for the “Stop the Violence” billboard campaign. Billboards will begin appearing on Monday at 20 locations across Erie County. They will move to new locations every four weeks through Sept. 22. Each location was chosen based upon historical shooting data provided by the Erie County Crime Analysis Center.

“Information from the public is critical for law enforcement in solving crimes and prosecuting offenders,” Flynn said. “I am proud to be one of the partners in Erie County that can assist Crime Stoppers Buffalo in publicizing unsolved crimes. I hope that the billboard campaign will encourage citizens to come forward with any information about a crime that may help us arrest and convict those responsible.”

“Thanks to the generous donation from Erie County – spearheaded by Erie County Executive Mark Poloncarz – and support from our law enforcement partners – led by Erie County District Attorney John Flynn – Crime Stoppers can up the ante to help crackdown on crime and keep our streets safer this summer,” Clark said.

Anyone with information on a crime can report it on the Buffalo Tips app, which can be downloaded for free at the Apple App Store or on Google Play; or call 716-867-6161. All tips will remain anonymous. For more information, visit https://www.crimestoppersbuffalo.com/.

The enhanced rewards for information leading to an arrest and prosecution in fatal or nonfatal shootings, or to the recovery of firearms believed to be used to commit a violent crime, will be:

•$7,500 for information leading to an arrest and prosecution in a homicide ($2,500 from the city, county and Crime Stoppers)

•$5,000 for information leading to an arrest and prosecution in a shooting incident (funded by the county)

•$1,000 for information leading to a weapons seizure, arrest and prosecution (funded by the county)

“These enhanced rewards and the prominent billboard campaign will raise awareness in the community and help law enforcement to take dangerous individuals off the streets,” Jancewicz said. “This is a small investment to save lives in our community.”

Town of Hamburg Police Chief Greg Wickett, president of the Erie County Chiefs of Police Association, added, “The Erie County Association of Chiefs of Police has a long and successful relationship with Crime Stoppers Buffalo. They are a tremendous resource to locate wanted persons and for information from the public on unsolved crimes. The additional funding that is being announced today should assist law enforcement in persuading those who have information to come forward in an effort to remove dangerous criminals from the street and bring justice to victims of crime. The Erie County Chiefs of Police fully support these efforts and pledge their continued support of Crime Stoppers Buffalo.

The City of Buffalo will increase its portion of reward funds on homicides from $1,500 to $2,500.

All payments will be vetted by the Crime Stoppers board in conjunction with the appropriate law enforcement agency, in compliance with the recently executed memorandum of understanding signed by the county and Crime Stoppers (which also includes a one year sunset clause for Erie County). The Erie County Crime Analysis Center will monitor the statistical effectiveness of the program for continuation.