The 2019-20 Harborcenter Hockey Tournament Schedule has been announced. The upcoming season’s schedule will feature 25 individual tournaments, serving both boys and girls from ages 6 to 18.

The popular Harborcenter Cup AA tournament series will return for a fifth season. AA teams at all levels are invited to apply online at www.HARBORCENTER.com/tournaments. The Buffalo Beauts are proud to announce the return of the Buffalo Beauts Showcase series for girls hockey teams in the 12U, 14U and 16U/17U categories. All girls teams are invited to apply using the same link.

The 2019-20 season will be the second for the Buffalo Jr. Sabres Invitational tournament series. Elite AAA teams at every level from 9U to 18U will be contacted by tournament organizers with invitations to participate. The series replaces the Harborcenter Cup AAA series and is expected to draw some of the top AAA teams from across North America. 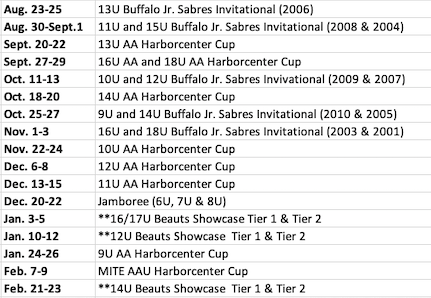 Harborcenter Cup Tournaments and Buffalo Beauts Showcase tournaments feature a four-game guarantee, with most events being USA Hockey-sanctioned and played at the two-rink downtown Buffalo complex on Fridays, Saturdays and Sundays. There are no gate fees for games, and all contests are streamed live in high definition for $8.95 for a single game purchase or $19.95 for the unlimited weekend package at rinksatharborcenter.com All teams participating in Harborcenter Cup Tournaments will also receive and educational experience in off-ice training with a warmup from IMPACT Sports Performance, operators of Harborcenter’s 5,000-square-foot high-performance off-ice training facility.