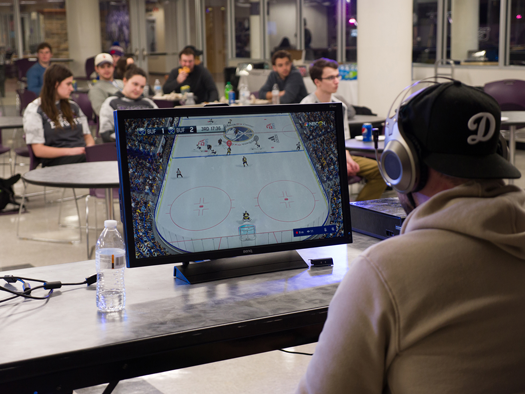 Niagara University students have a new way to engage with each other while developing strategic thinking, teamwork, collaboration, and goal-setting skills: esports. The competitive form of computer gaming is fast-growing on college campuses nationwide, with more than 100 institutions currently participating.

“Niagara University will benefit greatly from its newly developed esports club,” said Jason Jakubowski, Niagara University dean of student affairs. “It is critically important that we further support this initiative to meet the market demand for this type of student engagement opportunity. The students who are currently involved in this club are empowered by our office of campus activities to challenge one another in a healthy, competitive atmosphere that is built around teamwork.”

Officially recognized in October, the club held its inaugural event, an “NHL 19” tournament, on Feb. 20 in the university’s Gallagher Center. Presented by the esports club and Pegula Sports & Entertainment, a visit from Buffalo Sabres mascot Sabretooth highlighted the event. A dozen students competed to earn the opportunity to face off against the winner of the Canisius College tournament at an upcoming Sabres game at Buffalo’s Key Bank Center. Dan Spors, a freshman from Tonawanda, won the tournament, with Robby Helbringer, a senior from Clarence Center, placing second.

“This is great way for Niagara University to meet student interests and provide a co-curricular activity where they can represent the university in an activity that they clearly love,” said Bill Newton, assistant director of campus activities. “The ‘NHL 19’ tournament was a great first event for NU esports and an opportunity to have a student organization take advantage of the recent agreement with PSE.”

In March, the members of the esports club will compete against other universities at the HV Gamer Con & Expo in Albany. The event, the largest collegiate esports event in the Northeast, is co-sponsored by the Eastern College Athletic Conference and the Metro Atlantic Athletic Conference.

“Niagara University is excited to be nurturing and supporting our growing esports club,” said Christopher Sheffield, associate vice president for student affairs and institutional effectiveness. “Far from the misperception of gaming as an individual and isolating activity, organized esports promote social interaction, teamwork, communication skills, leadership and engagement in the vibrancy of campus life. We know that campus engagement and connection are foundational to student satisfaction and success in college. Esports will enhance our ability to connect students with one another and to the university community, while promoting the positive impacts of healthy competition, teamwork and fun.”

Future plans for the esports club include joining the ECAC fall esports league so that members can play other institutions in multiple titles; and to dedicate a physical space on campus for the club to allow members access to the technology they need to compete while enhancing their visibility within the student body.

“The esports landscape has been developing at a rapid pace globally, and its impact on college campuses is undeniable,” said Simon Gray, director of athletics. “I am proud that Niagara University’s esports efforts are student-led, and that a collaboration between student affairs, information technology, NUSGA and Division I athletics is bolstering the initiative. The Metro Atlantic Athletic Conference and its members are fully entrenched in esports, because of its ability to attract and engage students. I expect the popularity of Niagara esports to grow exponentially in short order.”