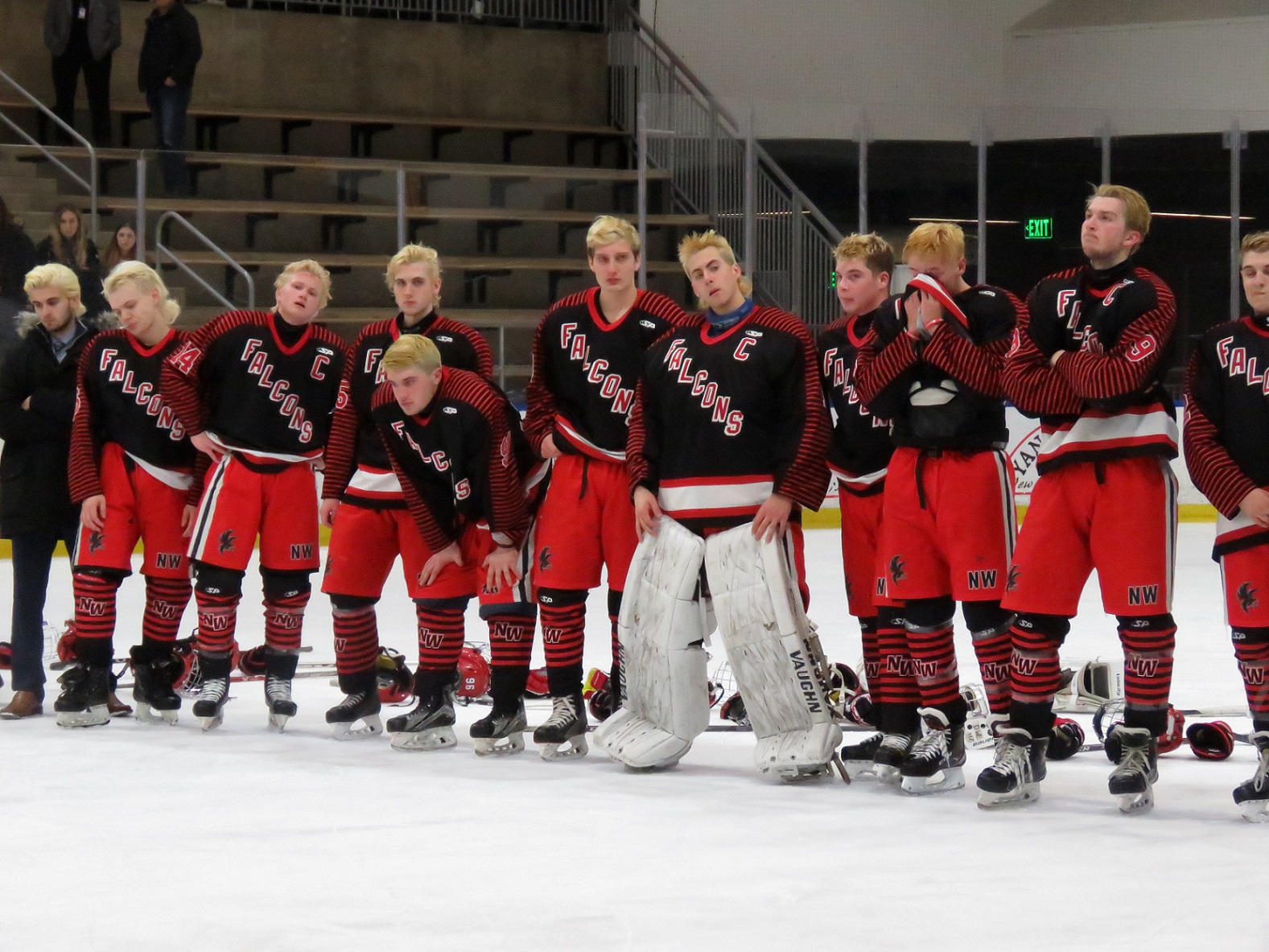 In the 2019 Section VI hockey postseason, the Niagara-Wheatfield Falcons proved doubters wrong by making the large schools final. On Monday night, though, the Falcons were halted at the hands of the Orchard Park Quakers, 4-0.

The Falcons came out of the gate tough defensively, as Niagara-Wheatfield senior goaltender Peyton Siegmann did all he could in the first period, facing 13 shots in the first 17 minutes.

Siegmann’s glove save on a Quaker’s breakaway kept the game deadlocked at zero, but shortly after, Kyle Flynn of OP executed a wraparound for a 1-0 lead.

Siegmann came up big just minutes later, as he snatched the puck glove side to make the save of the night and keep things at 1-0.

Meanwhile, offense was tough to come by for the Falcons with just six shots on goal.

After one period, the lone OP goal was the only tally on the scoreboard.

In the second period, after an N-W penalty, the Quakers converted on the power play, as Zach Mecca netted OP’s second goal.

The Falcons had a few open opportunities, as a Chris Cacciatore wrist shot was stopped with 11 minutes left in the second.

N-W went on the power play twice, as well, but came up empty-handed.

In the final period, the Falcons just couldn’t muster any type of efficient offense. Orchard Park was able to control the game and eventually added two more goals by Jack Kinsman and Jake Echevarria.

Niagara-Wheatfield would fall in the sectional title, 4-0.

The win for the Quakers was the team’s first sectional title in history.

For the Falcons, the game was its eighth appearance in the finals in 10 years. In the game, Siegmann finished up with 23 saves.

After enduring a 10-10 regular season -- relatively subpar for the N-W program -- coach Rick Wrazin was pleased that his team proved some naysayers wrong by reaching the final game.

“We’re very proud of them, especially if you look how our season went,” Wrazin said. “We had a winless January, and I just talked to them about that. A lot of teams would fold in a month like that, but these guys just kept getting better, despite the fact we weren’t winning. They came out and played harder and improved and that’s what got us here. … People didn’t expect us to get here, but we did, and that says a lot about them.”

Wrazin added that during the winless January, the team stayed confident and realized with the tough competition they were facing, the Falcons kept getting better.

“We ran into a good team tonight and we picked a day to just not be on our game,” Wrazin said. “But, I’m really proud of everything; the character they showed coming through the season and getting here.”

Offensively, life was tough for N-W, and the team found good shots on goal sparingly.

Wrazin said nothing would go in the team’s favor Monday night.

“We couldn’t get started. In part, credit to them, and, in part, we were just struggling. We couldn’t get on our game and they beat us three times this year, so sometimes it’s just the way you match up against another team. We shut down their transition -- that was our goal going in -- and they still beat us, so hats off to them,” Wrazin said.

With a young group of players on the roster, Wrazin said the seniors guidance was huge and a reason the team made it as far as it did.

“That was huge,” Wrazin said. “They showed them what it takes. Hopefully, moving forward, the guys coming back learn from them and know what they have to do going into next year.”

The Falcons finished with a final record of 12-11. 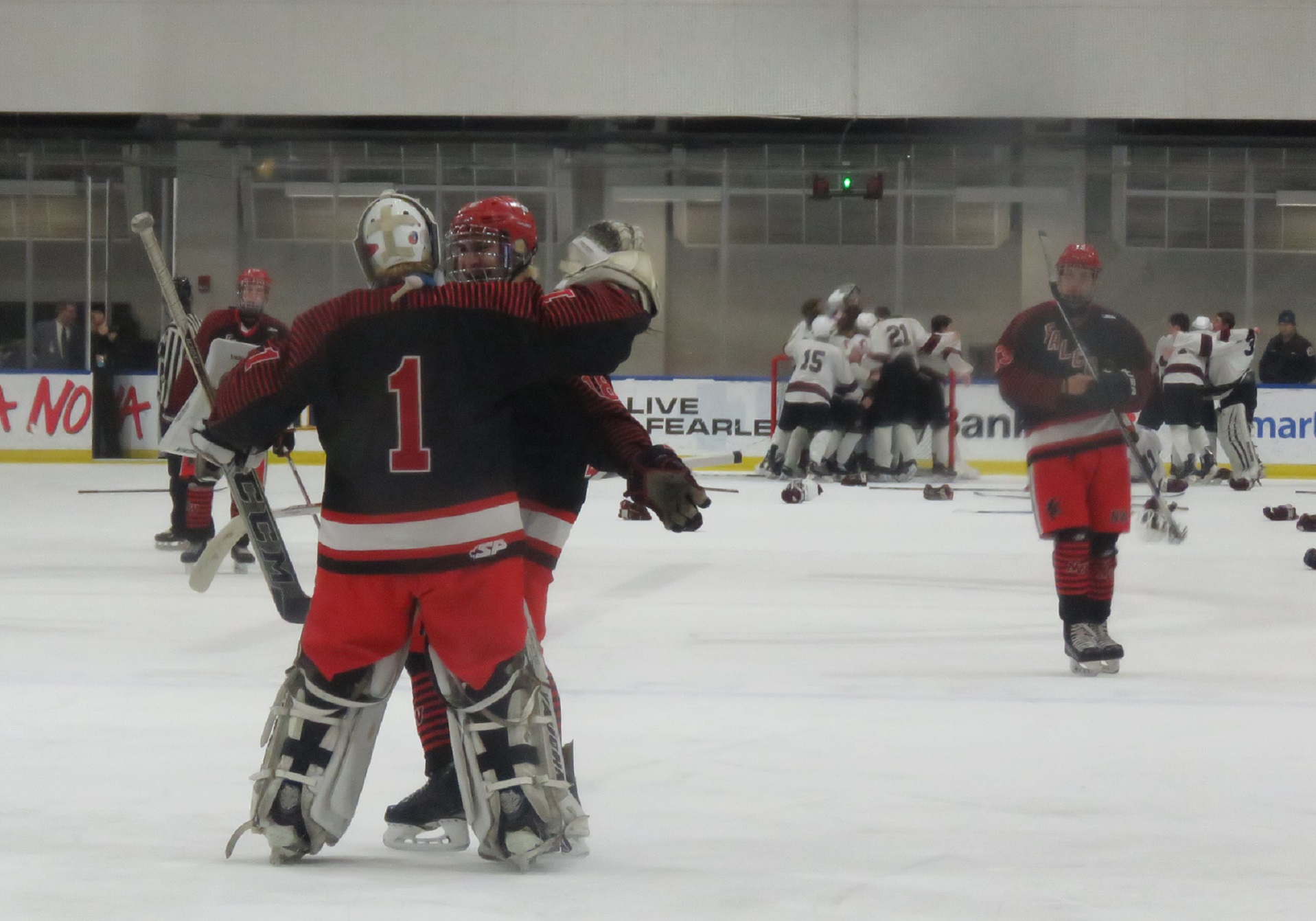 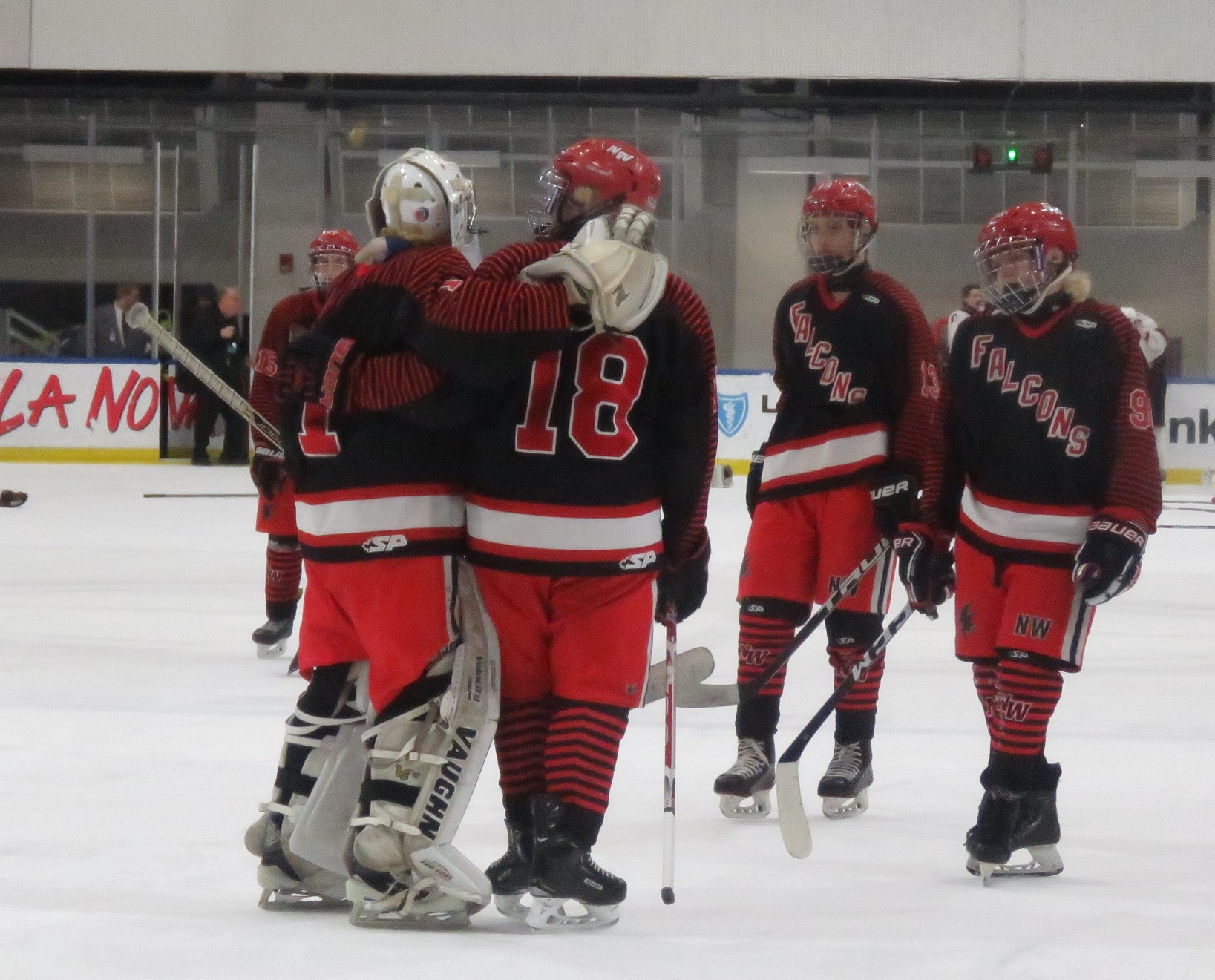 As celebration ensues on the Orchard Park end, Niagara-Wheatfield seniors Pete Lysiak and goaltender Peyton Siegmann embrace one last time on the ice as Falcons. 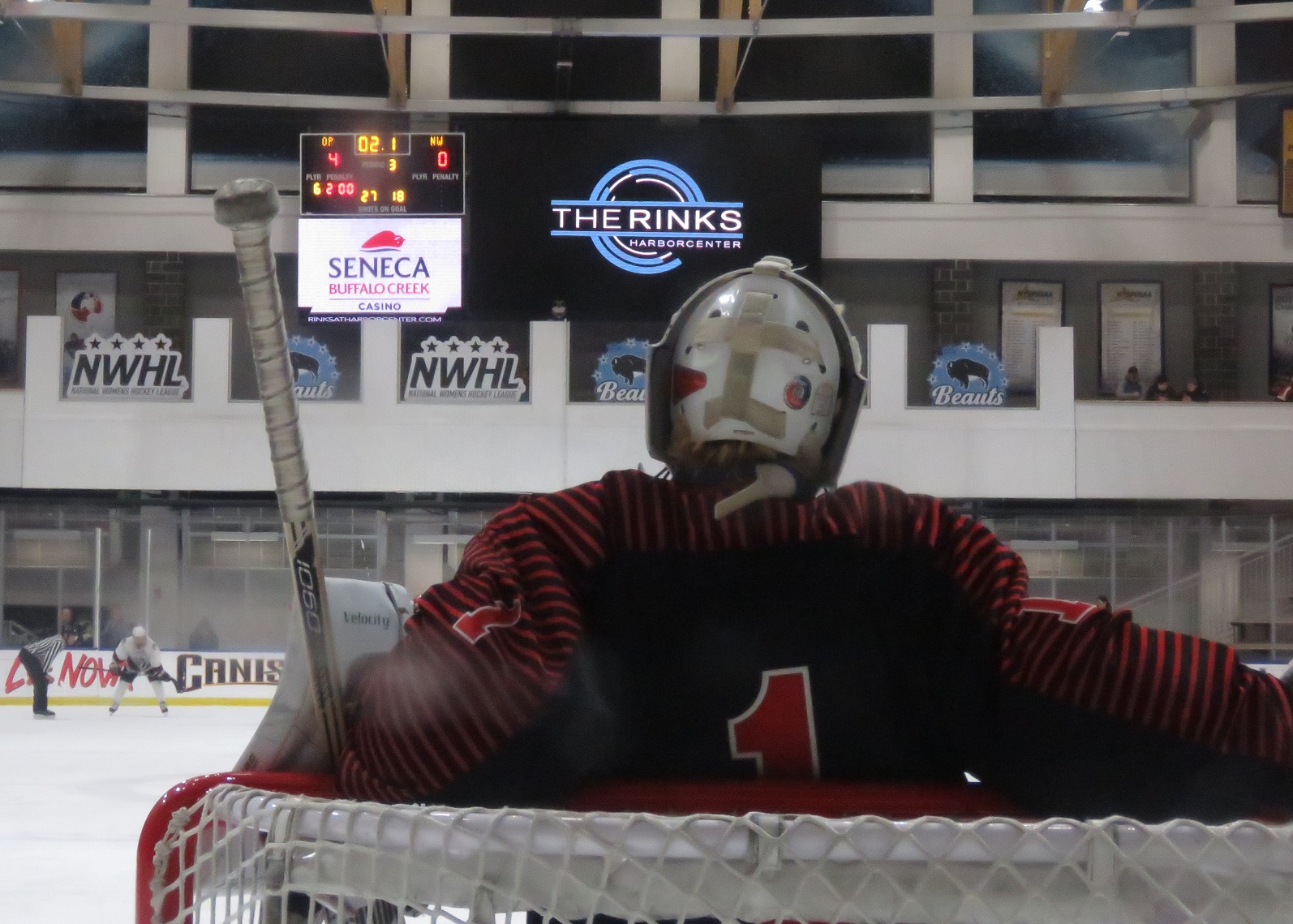 With time winding down, Siegmann mans the crease for N-W. 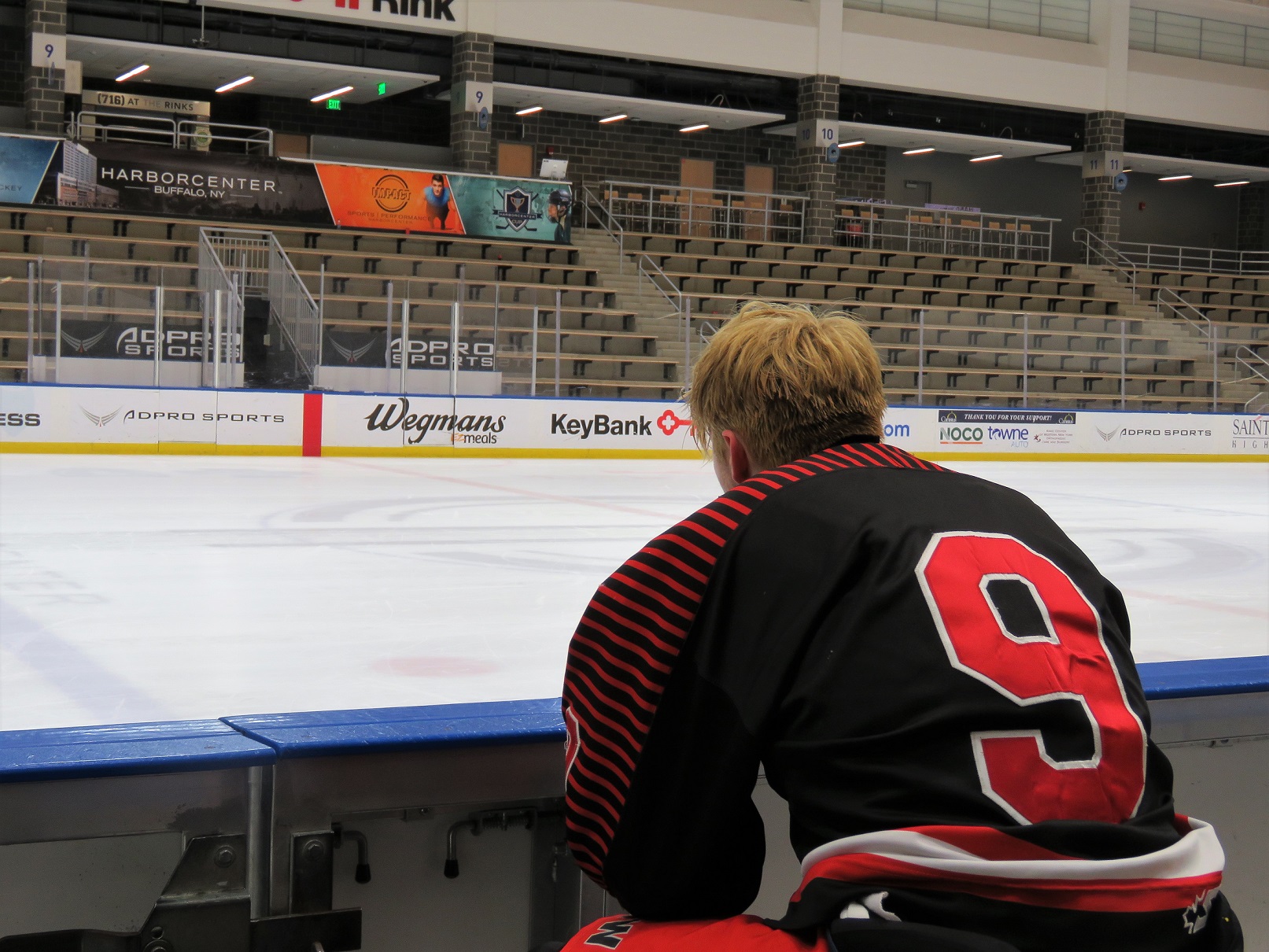 After the ice cleared, senior Caleb Lee took in the moment one last time as a Falcons hockey player.