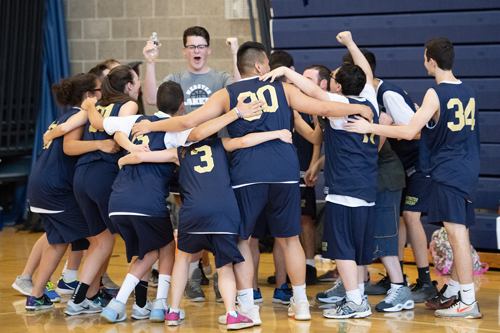 Special Olympics New York and the Golisano Foundation on Thursday announced a $265,000 grant to support the expansion of Unified Champion School (UCS) programming in the Western, Genesee and Central New York regions over the next three years.

UCS programming is a comprehensive, three-component model that combines unified sports, inclusive youth leadership and whole school engagement to create school and community climates of acceptance and inclusion. Unified sports include participation by athletes with and without intellectual disabilities on the same team.

In addition to building on this success, the partnership with Golisano Foundation aims to further engage students in the offseason by incorporating #Fit5NY, which promotes a healthy lifestyle through consistent physical activity, nutrition and hydration.

“The Unified Champion Schools movement is having an astounding positive impact in schools and communities across the country and, with this support from Golisano Foundation, New York will continue to be at the forefront,” said Special Olympics New York President and CEO Stacey Hengsterman. “We are thrilled to be taking our unified program a step further with the incorporation of our health and wellness initiatives alongside Golisano Foundation, a leader in supporting people with intellectual disabilities.”

“We are excited to join the inclusion revolution and support the expansion of the Unified Champion School program in the upstate NY region,” said Ann Costello, director of the Golisano Foundation. “This program is much more than a sports program. It is about health, fitness, friendship and acceptance – in and out of school – for all students, especially those with intellectual and developmental disabilities. We look forward to seeing the program grow in both the number of participating schools and quality of student leadership and engagement.”

According to an annual Special Olympics survey of participating schools, 100 percent of school liaisons report implementing UCS programming increased opportunities for students to work together; 99 percent report it raised awareness across the student body of students with disabilities; and 96 percent said UCS created a more socially inclusive school environment highlighted by greater respect for diversity, social and civic learning, and school connectedness and engagement.

“The unified sports program epitomizes unity and inclusion,” said Brockport Central School District Superintendent Dr. Lesli C. Myers-Small. “There has been a noticeable improvement in school climate since the debut of our program in 2015, as students with and without intellectual disabilities form bonds that extend beyond the basketball court. Seeing students empower one another while creating lifelong memories is truly inspiring.

"Unified sports has transformed our school community by inspiring in ways that is hard to even express in words,” said unified sports coach at Starpoint High School Kathie Kreppenneck. “The biggest impact has been the inclusion and acceptance of students with disabilities throughout the high school, as well as our community. Walking through our hallways, you can see positive student interaction between students with and without disabilities, which has increased drastically since adopting this program. Adding unified sports to our school has been a rewarding experience for everyone."

Driving the widespread success of the UCS approach is its inclusive youth leadership program, where a recognized school club comprised of students with and without intellectual disabilities meets monthly and organizes activities throughout the school year that support whole school engagement and ensure all students can meaningfully contribute to an inclusive school culture. Additional components include promotion of Special Olympics “Spread the Word” and “Fans in the Stands” campaigns, as well as recreational unified sports programs.

About the Golisano Foundation

The Golisano Foundation is one of the largest private foundations in the nation devoted exclusively to opening doors to opportunity, changing negative perceptions and stereotypes, and forging unprecedented partnerships to ensure individuals with intellectual and developmental disabilities have pathways to personal dignity, independence and the best possible expression of their abilities and talents throughout their lifetimes.

The foundation was founded in 1985 by Tom Golisano, an entrepreneur, civic leader, philanthropist and the founder and chairman of Paychex. Golisano’s philanthropy now exceeds $300 million.