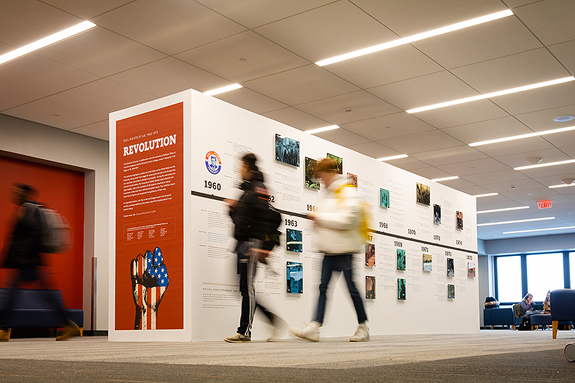 This section of the "Revolution" exhibit in the Silverman Library features a timeline of events occurring throughout Buffalo and across the nation during the civil rights movement. (Photo credit: Douglas Levere)

Long before the Distinguished Speaker Series, the University at Buffalo was a destination for powerful figures in the civil rights and political movements of the 1960s-70s, hosting influential guests who ranged from Malcolm X to Muhammad Ali.

The university will revisit this era through a new exhibit, “Revolution: Civil Rights at UB, 1960-75,” an array of visual displays that document the social transformation that occurred on campus and across Buffalo.

The exhibit will feature a 24-feet-by-4-feet structure in the Silverman Library on the North Campus. It will showcase five transcendent leaders who visited UB: Martin Luther King Jr., Malcolm X, Angela Davis, Shirley Chisholm and Cesar Chavez. The wall will also feature audio recordings of speakers and a timeline of events occurring throughout Buffalo and across the nation during the civil rights movement.

Portraits of prominent figures of the era will be on display in Abbott Hall on South Campus. A civil rights-themed book display will be exhibited in Lockwood Memorial Library on North Campus. A series of oral histories collected from faculty, staff, alumni and members of the Buffalo community who were engaged in activism during the period will become available online following the spring semester.

The project is a collaboration between the UB Office of Inclusive Excellence, UB Libraries and UB Honors College.

An opening reception will be held at 4 p.m. Tuesday, Feb. 5, in Silverman Library in Capen Hall on North Campus.

The reception will occur three weeks prior to human rights activist and author Davis’ third return to UB, this time as the 43rd annual Martin Luther Kin, Jr. Commemoration Keynote Speaker of the Distinguished Speakers Series on Feb. 27.

“As a historian, I am struck by UB’s incredibly rich and important history of students, faculty and staff who have fought for justice and civil rights. The 1960-70s for UB was this period of incredible engagement around issues of social justice. UB was known as the ‘Berkeley of the East’ because of that engagement,” said Despina Stratigakos, Ph.D., UB vice provost for inclusive excellence. “Part of the campus knows this history, but there is so much that has been forgotten. It is important that we both learn from and be inspired by our history. We have a responsibility to our legacy and to the people who spoke up to create a better environment for all of us.”

UB, during the 1960-70s, frequently made national headlines for the protests held by students and faculty. Then a single campus along Main Street in Buffalo, the university was a hotbed of activism and demonstrations regarding civil rights, women’s rights, politics and the Vietnam War.

“One powerful myth that this exhibit can help challenge is that the civil rights movement was something that happened somewhere else, and that Buffalonians were simply observers,” said Victoria Wolcott, Ph.D., UB professor of history and an expert on race and civil rights in the U.S.

“Buffalo had its own ongoing racial struggles that directly interacted with the national civil rights and Black Power movements. It was likely these struggles that spurred student groups to invite major movement figures to campus.”

UB students were instrumental in the creation of the exhibit.

UB Presidential Scholars, academically gifted students enrolled in a program within the Honors College that provides an innovative curriculum and unique opportunities outside the classroom, completed research on UB student activism and the numerous figures to visit the campus during the 1960-70s, a period of UB history that had not been extensively studied.

In addition to the information being used in the exhibit, the student reports will become part of an archival collection in the UB Libraries that will provide future researchers interested in the topic with a starting point.

“Through this exhibition, we have an opportunity to strengthen our understanding of and appreciation for the individuals and events that shaped UB and the world we live in today,” said Amy Vilz, university archivist in the UB Libraries. “We hope that the students who conducted research in the University Archives have gained a deeper sense of place and a stronger connection to our shared past.”

Dalia Muller, Ph.D., associate professor of history and director of the Honors College, said, “The Presidential Scholars, most of whom intend to pursue careers in STEM, found historical research foreign yet exhilarating. As a historian myself, I was particularly pleased that my students were able to experience, recognize and value research conducted outside of the laboratory.”

Jatsia Kramer Chen, a nursing student and Presidential Scholar, is motivated by the advocacy of past UB students.

“It showed that the student body was very much aware of what was going on in the world around them so that they could figure out how to change it for the better. It not only gives me hope for the future, but it also inspires me to be a part of that movement for a better tomorrow, too,” Chen said.

Students will also take part in a course during the spring semester that involves collecting the oral histories of faculty, staff, alumni and community members who were locally engaged in activism during the period.

The course is led by Michael Frisch, Ph.D., professor emeritus of history, who returned to UB to lead the class. Frisch, who joined UB in 1969, was one of 45 faculty members who staged a sit-in at Hayes Hall in response to the police presence on campus after student protests.

The three-credit course will train students to conduct long-form interviews, use audio and digital recording technology, and to index materials for future reference. After the course, oral histories will be archived within the UB Libraries.

“People are archives,” Frisch said. “With good curiosity, if you talk to them and listen carefully, you can learn a great deal about details outside of your own world.”

The exhibit will remain on display through 2019. Programming on themes of the exhibit will be organized in the UB and Buffalo communities throughout the spring semester.