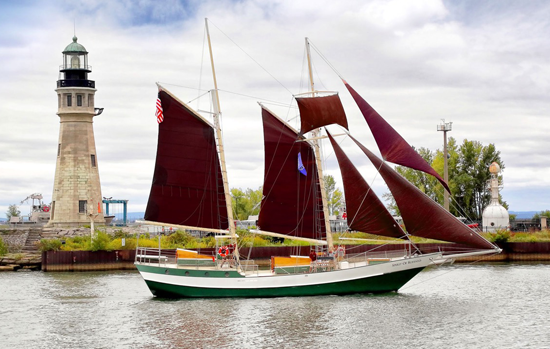 Spirit of Buffalo (U.S.) is Buffalo's flagship and the homeport vessel host of Basil Port of Call: Buffalo. Operating out of her normal berth in Canalside's commercial slip, she, too, will offer sailaway excursions during the days and evenings of the festival. A 73-foot steel topsail schooner owned by Buffalo Sailing Adventures, she carries up to 42 passengers. Her tanbark sails have graced the Buffalo waterfront since 2009. (Photo provided by the Port of Call: Buffalo steering committee)

Extraordinary fleet of 12 tall ships to arrive on July 4, and berth on Buffalo's waterfront through July 7

A fleet of 12 historic and majestic tall ships from harbors across the U.S., Canada, Spain and the South Pacific will grace Canalside, Riverwalk and Erie Basin Marina for Buffalo’s inauguration as a host port of the Tall Ships Challenge Great Lakes 2019 race from Toronto to Buffalo on July 4-7.

In conjunction with the arrival of the tall ships, Basil Port of Call: Buffalo, a four-day, family-friendly celebration of the city’s maritime heritage, will take place along the downtown waterfront. Offering a unique opportunity for adults and children to view, board and explore the vessels, the festivities will feature family activities, live entertainment, historic exhibits, artisan food and beverages, and a “Parade of Sail” of the tall ship fleet.

Included in the flotilla are four, three-masted tall ships: Barque Picton Castle, originating from the Cook Islands in the South Pacific and circumnavigating the world; Denis Sullivan, Milwaukee, Wisconsin, and the world’s only replica of a Great Lakes schooner; Toronto-based Empire Sandy, serving as Canada’s largest schooner; and Nao Santa Maria, a replica of the flagship of Christopher Columbus’ exploration fleet, built and based in Punta Umbria, Spain. Eight, two-masted tall ships also will be in attendance: Bluenose II, a Canadian national symbol and goodwill ambassador for the province of Nova Scotia; US Brig Niagara, replicating Commodore Oliver Hazard Perry’s flagship in the Battle of Lake Erie during the War of 1812 and home-ported in Erie, Pennsylvania; HMCS Oriole, the oldest commissioned vessel in the Royal Canadian Navy and based in Halifax, Nova Scotia; Pride of Baltimore, a reconstruction of a Baltimore Clipper from the War of 1812 era representing the people of Maryland; and STV St. Lawrence II, a Kingston, Ontario, sail training brigantine operated by a crew of teenagers.

In addition to berthing on the waterfront, three of the two-masted tall ships will be available to leave port for either day or evening excursions: Appledore IV, a gaff schooner from Bay City, Michigan, emphasizing environmental stewardship of the Great Lakes ecosystem; Appledore V, a companion schooner from Bay City also offering environmental science programs; and Spirit of Buffalo, the home port vessel host of this Buffalo waterfront event.

Basil Port of Call: Buffalo is free and open to the public. To tour any or all of the tall ships, passport vouchers can be purchased at all participating Wegmans locations throughout Western New York, and online at www.PortOfCallBuffalo.org.

The Margaret L. Wendt Foundation, the Oishei Foundation and the Charles and Ione Arrick Charitable Fund at the Community Foundation for Greater Buffalo have awarded planning grants.

A nonprofit organization based in Newport, Rhode Island, Tall Ships America coordinates gatherings of member vessels to promote their education, history and science curriculums with a mission to encourage character-building through sail training, promote sail training to the North American public, and support education under sail.