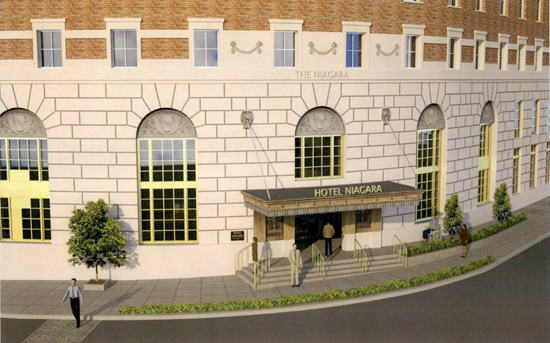 USA Niagara Development Corp. (USAN) board of directors met and authorized the corporation to formally enter into a development agreement with Brine Wells Development LLC or its wholly owned affiliate to start the Hotel Niagara restoration project.

The Hotel Niagara is the oldest standing hotel in Niagara Falls and retains much of the architectural integrity that once made it an iconic piece of the city’s skyline. The approximately $42 million project will utilize historic preservation tax credits to transform the property into a full-service, 160-room “upper-upscale” hotel with restaurants, lounges and banquet facilities. Construction will start in August 2019 with an expected reopening in 2021.

“This development agreement with Brine Wells to start the restoration of Hotel Niagara represents a major milestone in New York state’s continued efforts to grow tourism, economic and recreational-related activity to downtown Niagara Falls,” said USAN Board Chairwoman Francine DelMonte. “The transformation taking place in Niagara Falls is thanks to the dedicated members of the USAN board and Gov. Cuomo’s commitment to ensuring the region remains a world-class tourism destination. I look forward to Brine Wells returning the ‘grand lady’ of the city’s hotel collection to its former glory.”

“We are looking forward to continuing our working relationship with USAN and bringing this grand hotel back to life for the Niagara Falls community,” said Brine Wells Development LLC Managing Member Ed Riley.

Gov. Andrew M. Cuomo announced in July 2017 that Brine Wells was designated as “preferred developer” for the restoration of the Hotel Niagara on Centennial Circle in downtown Niagara Falls. Since that time, the developer has been completing its due diligence, finishing design work, securing approvals, and structuring financing while negotiating the development agreement with USAN. Brine Wells will pay USAN $1 to purchase the property and will receive an ESD economic development incentive of $3.5 million. Brine Wells will also secure state/federal historic tax credits for the project. The project will employ 150 direct, full-time equivalent construction jobs and 67 direct, full-time equivalent permanent jobs.

The Hotel Niagara property was acquired by USA Niagara in July 2016 with $4.4 million in Buffalo Billion funds. Brine Wells Development's plans will restore the lobby and related spaces to a quality level consistent with the property’s original design, and restore the main ballroom to its original 1920s condition. An on-site, full-service restaurant will focus on local foods and New York state wines, to be complimented by a lounge also equipped with sidewalk patio facilities. Other amenities include private meeting and dining rooms, a gift shop and exercise facilities. A new roof top terrace lounge is also part of the project.

Brine Wells Development has worked with the New York State Historic Preservation Office and the National Park Service. It has secured his approvals for a design that will fully maintain the historic integrity of the building.

The first rehabilitation of a historic hotel in the City of Niagara Falls, the project will restore the building’s finishes, architectural details and design elements to the original intent and offer its guests high-quality service.

Built in 1924, the 12-story Hotel Niagara was among the city’s finest lodging and banquet establishments and is listed on the National Register of Historic Places. Although it has long held a prominent spot in the downtown Niagara Falls skyline, decades of deferred maintenance, neglect and multiple changes in ownership resulted in the property’s degradation and eventual vacancy. The Hotel Niagara’s final iteration, a Travelodge, closed in 2007.

Brine Wells Development previously completed a similar transformation of the 95-year-old Hotel Syracuse in Syracuse. That $75 million project resulted in the Marriott Syracuse, a complete rehabilitation into a full-service, four-diamond facility with 261 guestrooms, two historic ballrooms, an IACC-certified conference space, six food and beverage venues, and a completely restored lobby. That property opened in August 2016.

In other news, Paul J. Tronolone, AICP, was named acting president of USAN. A certified city planner with more than 30 years experience, Tronolone currently serves as ESD Western New York vice president of policy and planning and is a member of ESD’s Western New York leadership team. He first joined USAN in 2005 as a senior project manager and has led a series of projects for the corporation before taking on his current duties for ESD. Tronolone will temporarily oversee day-to-day operations of USAN and help lead a search process for a new permanent president for the corporation.

USAN, a subsidiary of Empire State Development Corp., is solely dedicated to the support and promotion of economic development initiatives in Niagara Falls by leveraging private investment and encouraging growth and renewal of the tourism industry in the City of Niagara Falls.