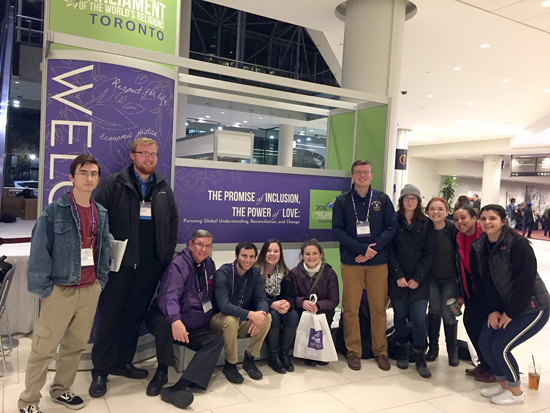 Mon, Dec 3rd 2018 12:30 pm
As religious intolerance continues to grow across the globe, 10 Niagara University students took advantage of an opportunity to experience the realities involved with, and to gain further understanding of, current efforts and issues in interreligious relations at the Parliament of the World's Religions (PoWR). The conference, held in Toronto Nov. 1-7, endeavored to cultivate harmony among the world's religious and spiritual communities to achieve a just, peaceful and sustainable world.
This year's parliament, the seventh of its kind, brought together more than 8,300 people from 81 countries and more than 200 unique religious, spiritual and ethical traditions.
The students attended presentations and viewed exhibits on topics including interfaith perspectives on death and dying; the impact of faith-based community youth programs; the Islamic view of terrorism; climate change; Zoroastrianism; and Sikhism.
For senior Marissa Belardi, the "17 Million 'Missing' Women" exhibit, which featured 11,700 pairs of baby booties, was one of the most impactful experiences. Each pair of booties represented 10,000 "missing" women and girls, who died because of severe discrimination and lack of basic human rights. She noted the exhibit made her aware of how prevalent gendercide is globally.
Senior John Callahan's most memorable experience was decidedly more uplifting: He participated in a celebration led by the Dancers of Universal Peace - a meditative, joyous, multicultural circle dance that paired sacred phrases from the world's spiritual traditions with live music to create prayers.
The students attended the parliament as part of their course on the history of the Second Vatican Council, which opened pathways for Roman Catholic involvement in this type of dialogue.
"Attending the parliament gave these students a broader perspective and understanding of the Roman Catholic view of the beliefs held by others," said the Rev. Joseph Hubbert, C.M., who teaches the course. "This brief encounter with a most positive expression of a diversity of minds and hearts - while recognizing the challenges interreligious dialogue faces - flowed from the context of the course on the teaching and influence of the Second Vatican Council, which is generally understood as the most significant religious meeting of the 20th century. In keeping with Niagara University's Vincentian mission, the trip also provided evidence of the ways the parliament seeks to take action in concern for the poor and suffering of the world."
Reflecting on their experience at a panel discussion on Nov. 26 sponsored by Niagara University's newly established Center for the Study and Practice of Religion, the students said they were more aware of other religions and inspired by the ways attendees showed compassion and acceptance.
"The religions that came together were filled with peace, and people came from all over the world to share in their peace and to learn and respect other religions," Callahan said.
The first Parliament of Religions was held at the 1893 Chicago Columbian Exposition, and was the first formal meeting of the religious East and West. In 1993, a centennial celebration of the original Parliament was held in Chicago. Since then, parliaments have been held in Cape Town, South Africa (1999); Barcelona, Spain (2004); Melbourne, Australia (2009); and Salt Lake City, Utah (2015).
Categories
Around WNY NFP School Top News