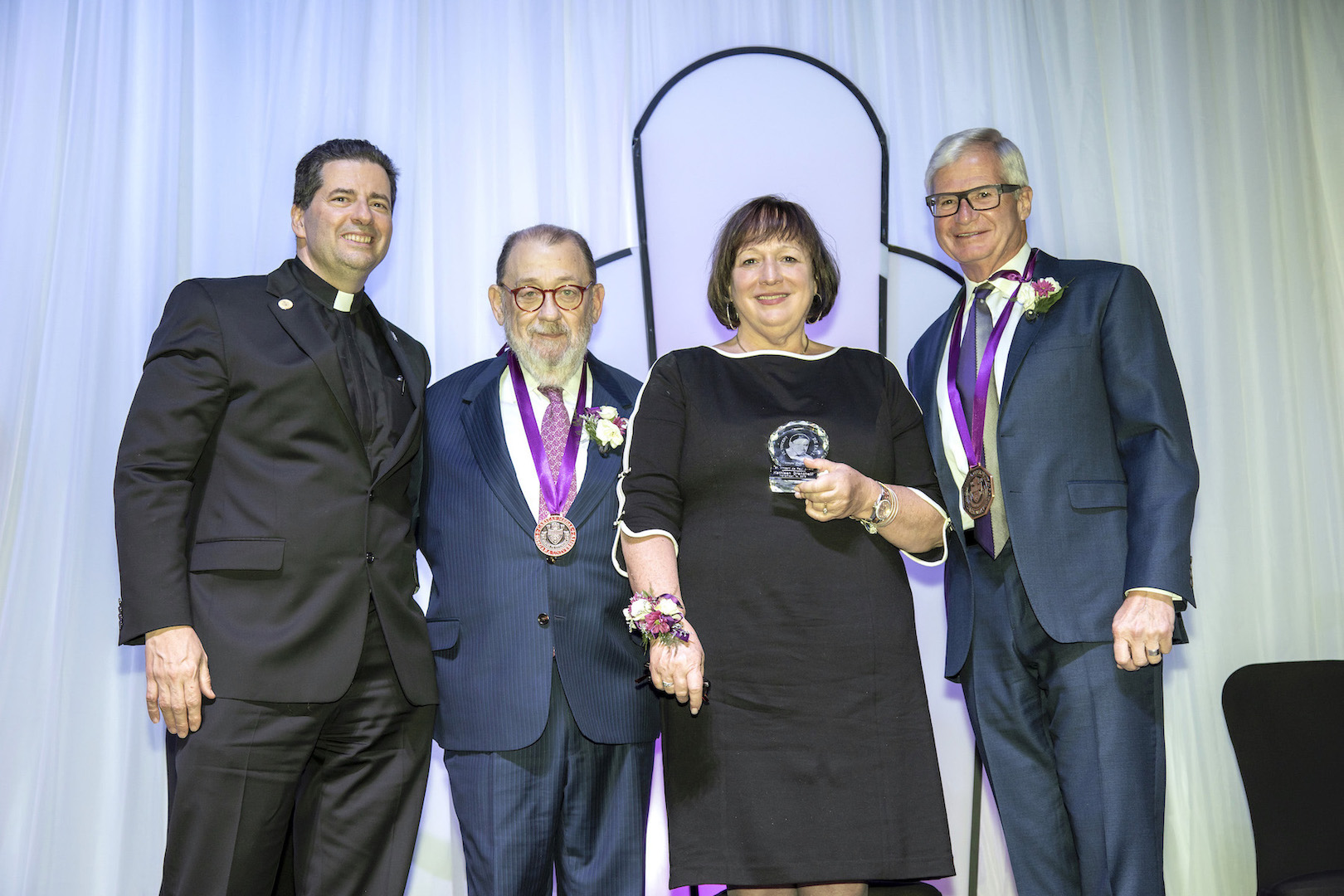 Mon, Nov 19th 2018 05:20 pm
Niagara University recognized the accomplishments of three individuals - while raising critical funds for student scholarships - during its 2018 President's Dinner, which was held Nov. 16 at The Conference & Event Center Niagara Falls.
Nearly 600 Niagara University alumni, students and friends attended the event, the proceeds of which directly benefit NU's scholarship programs. A net total of $330,000 was raised this year toward student scholarship assistance, exceeding last year's total by more than $100,000. This is also the fourth year in a row that the $200,000 fundraising mark was surpassed.
During the 2017-18 academic year, 98 percent of incoming students received scholarship and grant assistance from the university that totaled almost $45,000,000.
"At Niagara, St. Vincent's legacy forms the foundation for everything we do as an institution," said the Rev. James J. Maher, C.M., Niagara University president. "I have focused the office of the president of Niagara University on the Vincentian tenets of access, student support and engagement, completion and impact of our graduates. We have worked diligently with our alumni and donors to increase the scholarship dollars available to our students, so that they may benefit from this excellent education, which equips them with the tools to create change in our global society. I am grateful to those, including state leaders and corporations, who are following our lead."
At the dinner, three individuals were honored for their remarkable professional success and service to the community.
•Jonathan A. Dandes (Caritas Medal), is a 32-year associate of Rich Products Corp., and has served as the president of Rich Baseball Operations since October 2001. In his current role, Dandes oversees the Buffalo Bisons (AAA), Northwest Arkansas Naturals (AA) and the West Virginia Black Bears (A), along with supervising Outer Harbor Buffalo, Canalside Buffalo, and the Palm Beach National Golf & Country Club in Lake Worth, Florida. Throughout his career, Dandes has been active in the Western New York community. He is currently the chairman of the board of the Buffalo Zoological Society (Buffalo Zoo) and the Buffalo Public Schools Foundation, and is past chairman of the ECMC Foundation board and the Buffalo Niagara Partnership. He is the immediate past chair of Erie County Jewish Family Services and chair of Visit Buffalo Niagara (formerly the Buffalo and Erie County Convention & Visitors Bureau). Dandes is currently an adjunct sport management professor in NU's College of Hospitality and Tourism Management.
•Kathleen A. Granchelli (St. Vincent de Paul Award) has served as CEO of the YWCA of the Niagara Frontier for the past 25 years. Under Granchelli's tenure, the YWCA has been recognized for visionary housing, domestic violence, economic self-sufficiency programs, and social enterprise programs, as well as for its ability to leverage funding to bring critical programs to the local community. Prior to her current role at the YWCA, Granchelli was an assistant vice president at Goldome and KeyBank in Buffalo and a legislative assistant to Congressman John LaFalce. She is a member of the Niagara County Work Force Investment Board, a board member of the Homeless Alliance of Western New York, and former president of the YWCA's of New York State. She has been honored as a New York State Woman of Distinction and Niagara USA Chamber Community Advocate of the Year, and is a recipient of Niagara University's St. Louise de Marillac Award.
•Robert B. Engel, Class of 1975, '06 (Hon.) (Medal of Honor) began his public accounting career with Deloitte, and then KPMG, before moving to the banking industry. He joined HSBC in 1986, ultimately becoming the chief banking officer for HSBC Bank USA. Engel left HSBC in 2000 to join CoBank ACB in Denver, where he was named president and chief operating officer. He was promoted to president and CEO and served for 17 years prior to his retirement in 2017. Whether working on preschool programs for disadvantaged youth, or serving as the chairman of the board of trustees of Regis University, Engel's commitment to education and young people is unparalleled. He has also had a very active role at NU as a member of its board of trustees, serving on many committees over almost 20 years. He served as a youth athletics coach and was a long-time member of the Buffalo Sabres Alumni Association's board of directors. Engel has received many awards, including the Ellis Island Medal of Honor (1995), an honorary degree from NU (2006), the Kenmore East Hall of Distinction (2011) and the Denver Corporate Citizen of the Year award (2016).
Gary P. Hall, co-founder and Chairman of WTS, Inc. a global provider of sustainable solutions for by-product management, and Gary D. Praetzel, Ph.D., Niagara University dean emeritus, served as the dinner's co-chairs.
The American and Canadian national anthems were sung by Niagara University theater performance major Marissa DelVecchio of the Class of 2019.
Additional information on NU's financial aid and scholarship programs can be found online at www.niagara.edu/scholarships-financialaid or by calling 716-286-8700. For information on establishing or contributing to a scholarship fund, contact NU's office of institutional advancement at 716-286-8787, or go to www.niagara.edu/make-a-gift.
Categories
NFP School Top News Features