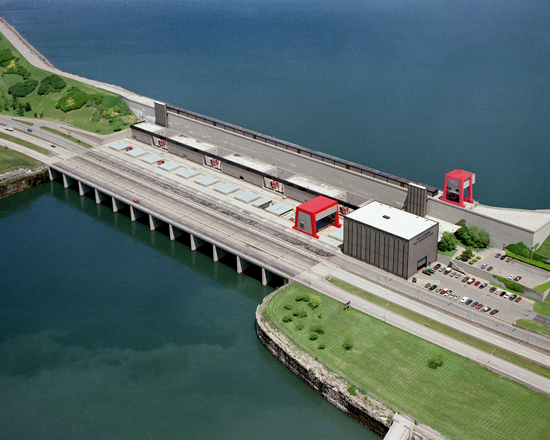 Thu, Nov 1st 2018 04:30 pm
Digitizing controls improves reliability, helps generate jobs & economic investments in New York
The New York Power Authority announced that it is nearing the three-quarters mark in a $460 million infrastructure improvement project at its Lewiston Pump Generating Plant. The multiyear program allows NYPA to continue to provide low-cost power and power proceeds to businesses in Western New York and statewide tied to thousands of jobs and billions in capital investments that have positively impacted the state economy. The midpoint of the upgrades was announced by Gov. Andrew M. Cuomo in March 2017.
The upgrades at the Lewiston Pump Generating Plant (LPGP), known as the life extension and modernization program, provide for the gradual replacement of the facility's 12 pump-turbines and its generator step-up transformers, which date back to 1961 when the Niagara plant first went into service. The upgrades include substituting new programmable computer controls for the outdated remote terminal units that currently control the generators, as well as replacing manual chart recorders and mechanical controls with state‑of‑the‑art digital displays and human-machine interfaces that allow inputs to be translated as signals for the equipment to perform particular tasks.
Thursday's milestone, which recognizes the completion of the eighth turbine to be replaced and the beginning of work on the ninth pump unit, represents another step in NYPA's digital transformation.
"Digitizing our control systems is not only paramount to NYPA's strategy to become the nation's first end‑to‑end digital utility, but it also allows us to ensure more reliable power through decentralization of control," said Gil C. Quiniones, NYPA president and CEO. "By implementing advanced controls that operate a single pump generator unit locally and remotely, the plant can override potential issues with one unit and continue operating while the problem is resolved, ultimately increasing the resiliency and reliability of the plant."
The 12 generating units at LPGP operate in tandem with the Robert Moses Power Plant to provide 2,441 megawatts to the statewide power system. Currently, four remote terminal units control all of 12 LPGP generators - one control for every three turbine generators. With the addition of the new programmable computer controls, each unit can be operated independently, reducing the risk of a single issue taking three generating units out of service. Additionally, the new computer controls mean each generator can be monitored from the central control room in the Robert Moses plant, the local control room at LPGP and the control board at each individual unit. By creating three distinct operating channels, NYPA operators can run the generators as stand‑alone units to continue delivering power even during a sitewide communications outage. By optimizing plant operations, the project helps advance NYPA's strategic vision 2020 and Cuomo's "Reforming the Energy Vision" strategy to create a more resilient energy system for all New Yorkers.
In addition to the reliability benefits, the upgrades will facilitate additional input/output points, which supports NYPA's sensor deployment strategy and asset management strategic initiative by enabling the installation of an even greater number of sensors and devices on NYPA assets. The additional sensors will then transmit the data in real time to the Integrated Smart Operations Center (ISOC) in White Plains. Digital displays installed at the unit control boards and in the control rooms will also improve data visibility, allow operators to access a detailed history of each asset, and isolate its individual data points, such as water levels and vibration, to a finer resolution.
Pumped-storage facilities like LPGP store water as potential energy during off-peak hours for later use when demand is higher. At night or on weekends, when electricity demand is low, the pumped-generating plant's reversible pump-turbine generating units operate primarily as pumps, transporting water from the Niagara project's forebay up to the Lewiston plant's 20-billion-gallon upper reservoir, which is approximately 70 to 120 feet higher in elevation. Surplus electricity from the Moses plant is used to power the pumps to push water into the Lewiston Reservoir during the off-peak times.
Categories
Home feature NFP Sentinel Sentinel feature Top Around WNY Feature Top News
comments powered by Disqus