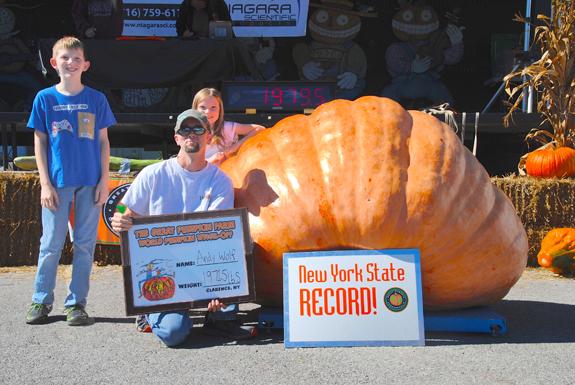 2017 champ Andy Wolf and his team, (Photos provided by the Great Pumpkin Farm)

That's a lot of pumpkin

Mon, Sep 24th 2018 02:05 pm
Annual World Pumpkin Weigh-off at Great Pumpkin Farm; can this year's winner beat last year's NYS record-setting 1,971.5-lb. pumpkin?
Some of the area's - if not the world's - largest pumpkins will be featured at the Great Pumpkin Farm this weekend, as the annual World Pumpkin Weigh-off takes place beginning at noon on Sunday, as part of the Fall Festival's third weekend.
Last year, Andy Wolf of Little Valley took first place (and set a New York state record) with his 1,971.5-pound pumpkin. In the process, he upset two-time champion Karl Haist of Clarence.
Can that number be topped this year? Will one of the entries be large enough to set a world record - and take home a $10,000 cash prize?
The Great Pumpkin Farm had the first 1,000-pound pumpkin at the 1996 Great Pumpkin Farm Fall Festival - 1,061 pounds - and it went right into the Guinness Book of World Records. Since then, there have been many pumpkins entered in the weigh-off well over that weight.
What will this year bring?
Winners will be announced Sunday as soon as all entries are officially weighed in. The owner of the largest pumpkin at the World Pumpkin Weigh-off will take home the top prize of $5,000, (with the chance to win twice that amount and earn a world record if his or her pumpkin weighs over 2,000 pounds). Cash prizes will also be awarded for second through sixth place. For more information, including rules and a list of previous years' winning entries, visit https://www.greatpumpkinfarm.com/event/2017-world-pumpkin-weigh-off/ 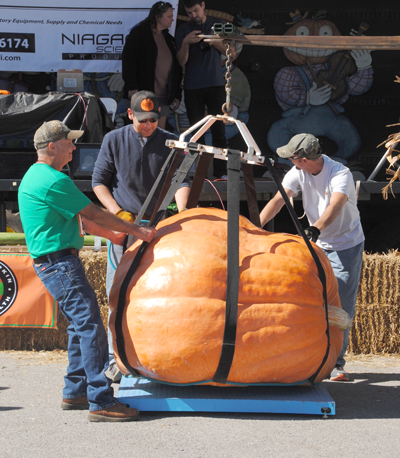 The 2017 weigh-off.
Other special ticketed and free attractions during the third weekend of the Fall Festival include:
•Wild Bull Rides. Take your chances with a wild ride on the mechanical bull starting this weekend and available weekends through Oct. 28. (Ticketed.)
•Zombies in the Corn Maze. Several zombies will be wandering around in the corn maze from noon to 4 p.m. both Saturday and Sunday. (Ticketed.)
•Sylvia Fletcher & Friends starring in "Ventastic." This comedy ventriloquism show takes place at 12:30, 3 and 4:30 p.m. both days, and is free with festival admission.
•Magic by Mike & Annie. This magic experience is full of comedy and audience participation opportunities. Show times are 11:30 a.m., 1, 3 and 4:30 p.m. both days in the Pumpkin Palace (next to the Cackling Hen Revue). Free with admission.
The Fall Festival runs from 10 a.m. to dusk weekends through Sunday, Oct. 28. Admission is $8 per person, with children ages 2 and under admitted free. Discounted tickets are available at all Buffalo and Rochester Wegmans.
The Great Pumpkin Farm is located at 11199 Main St., Clarence, and features plenty of free, onsite parking. Complete event information is available at www.greatpumpkinfarm.com. The 2018 Fall Festival Guide is available at all Wegmans locations and online at www.guide.greatpumpkinfarm.com.
Categories
NFP
comments powered by Disqus