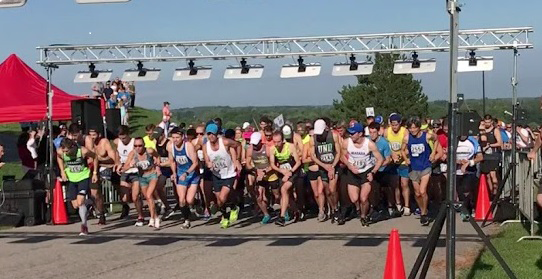 Runners at the start. (Submitted photo)

Mon, Sep 24th 2018 01:00 pm
It was a special year for The Mighty Niagara Half Marathon and Hospice Dash 5K. This year marked the 10th anniversary of the Hospice Dash 5K. The milestone was acknowledged by custom gold medals awarded to every finisher of the 5K.
The event, presented by Cornerstone CFCU, was held on Sept. 15 and attracted more than 1,500 runners.
Under sunny skies, participants began their scenic route at Artpark in Lewiston and continued along Lower River Road, through Old Fort Niagara and finished along the shore of Lake Ontario at Porter on the Lake Park. Bands played throughout the course, as well as before and after the run. The post-race party featured popular local band Nerds Gone Wild, along with refreshments, food trucks and awards.
"We appreciate all of the people that come out to support our event. The runners, sponsors, volunteers, and local police and fire departments are all extremely important to us. Our event would not be possible without them. We are so grateful to be able to continue our event to support Niagara Hospice," said Race Director Paul Beatty Jr. He and his family started the race as a small 5K in 2009. The half-marathon was added in 2011 and has grown in popularity each year.
Winners of the half-marathon won cash prizes as well as custom trophies. Winners of the Hospice Dash 5K received custom trophies while age group winners in both races were awarded pins to accompany their finisher medals. Many runners raised thousands of dollars through fundraising for the race. All proceeds from the event benefit Niagara Hospice.
Since 1988, Niagara Hospice has provided end-of-life comfort, care and support to more than 20,000 Niagara County individuals and families faced with terminal illness. For more information, visit www.NiagaraHospice.org or call Hospice at 716-439-4417.
Categories
Around WNY NFP Our Fave Photo Sentinel Top Around WNY Feature