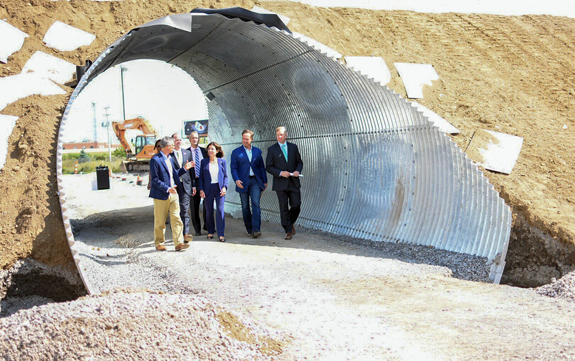 Wed, Sep 19th 2018 05:00 pm
Leaders detail progress on waterfront destination, set to open next spring
Congressman Brian Higgins, Lt. Gov. Kathy Hochul and Empire State Development Vice President of Waterfront Development Steven Ranalli were joined by New York State Sens. Chris Jacobs and Tim Kennedy, New York State Assemblymember Sean Ryan and City of Buffalo Mayor Byron Brown to detail progress on the latest project underway along Buffalo's Outer Harbor.
"The Buffalo Outer Harbor has seen tremendous progress over the last 10 years and, with this project, we continue the momentum providing the public with a unique, natural waterfront experience," Higgins said. "A decade ago, Fuhrmann Boulevard was a difficult-to-find, crumbling one-way street adjacent to vacant or abandoned land of little interest to the public. Today, visitors flock to Buffalo's new Outer Harbor, which features an interconnected network of parks, trails and public spaces."
Hochul said, "Thanks to a steadfast focus on transforming Buffalo's ‎waterfront, the Outer Harbor is becoming accessible to the public for the first time in generations. The new Buffalo Harbor State Park is proving to be a catalyst for change, sparking continued investment in quality-of-life projects that benefit residents and visitors to Western New York. Buffalo may have been left behind for decades, but we are working every day to create the New Buffalo - and we are just getting started."
Jacobs said, "I am very pleased to mark the great progress that has taken place along Buffalo's Outer Harbor with details of the next $5 million of investment in our greatest regional and natural asset. When this next phase of development is completed next spring, the Outer Harbor will have the infrastructure, attractions and capacity to be an even greater destination point, improving both our quality of life and our economy."
Kennedy said, "Our waterfront is our most precious resource, and the continued progress along the Outer Harbor demonstrates the strong investment we're making in Buffalo's recreation, tourism and conservation. These projects will not only enhance experiences for residents and visitors, but will ensure a connectivity that is key to long-term growth."
Ryan said, "Over the past decade, the Outer Harbor has transformed into one of our region's greatest assets. These projects will play an important role in the continued revitalization of our waterfront and will allow the Outer Harbor to become an even better destination for residents and visitors."
Brown said, "The new active and passive recreational venues being created through the current phase of work along the Outer Harbor will attract even more visitors to our beautiful urban waterfront. The great variety of new attractions that will debut next spring will offer something for visitors of all ages and interests - from the new cycling and mountain biking park, to the great lawn that will give visitors a place to relax and take in panoramic views of our waterfront, or attend concerts. I thank Gov. Cuomo and all of my partners in government for their continued support for the reimagining of our waterfront. All of these resources have contributed to the transformation of the Inner and Outer Harbors in the City of Buffalo to their highest potential."
Construction is ongoing on Phase IB of the Buffalo Outer Harbor access and activation civic improvement project, converting 40 acres of vacant property adjacent to terminals A and B on Lake Erie into a waterfront destination featuring a Greenway Nature Trail, bike park, great lawn and overlook, all which will connect people with nature and the water.
The property, which was held by the Niagara Frontier Transportation Authority for nearly 60 years, was among the nearly 400 acres transferred to New York in 2016. The land sits between existing destinations at Wilkeson Pointe and Buffalo Harbor State Park.
Ranalli said, "What you see now as vacant land with construction vehicles pushing around dirt will be a hub of activity by next spring for cyclists, nature enthusiasts and others wanting to enjoy our waterfront. Gov. Cuomo had the vision back in 2013 when he facilitated the transfer of nearly 400 acres of land on the Outer Harbor from the NFTA to the state, and we continue to transform the area into a new visitor destination that revitalizes our city." 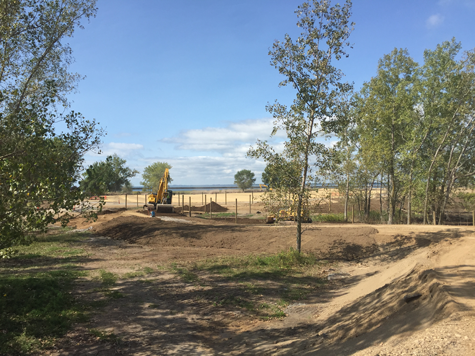 The great lawn.
Features of the project include:
•Greenway Nature Trail: Nearly one mile of additional multiuse trails will connect the existing Outer Harbor trail system with Fuhrmann Boulevard to complete the shoreline loop. The Nature Trail will be surrounded by over 10 acres of habitat enhancements and encompass a four-acre great lawn. With more than 350 new trees and 1,500 new shrubs, as well as 1.5-acres of pollinator fields, these areas will see the removal of invasive species while providing habitat for several species of nesting and migratory birds.
•Bike Park: A combination of trails and skills loops, the bike park provides an introductory-level course for mountain bike riders. The activity zone includes a pump track, skills loop and tot track with a viewing area and concourse. Nearly 1.25 miles of single-user dirt trails will be installed throughout the site and present varying degrees of skills and obstacles.
•Great Lawn: A four-acre grassed oval will provide space for events of all sizes. Surrounded by meadows and the Greenway Nature Trail, the great lawn will provide a unique setting for sunset views.
•Overlook: At the north edge of the great lawn, a mounded earthen overlook provides the adventurous with views over the breakwall and beyond.
Joseph Crumlish, speaking on behalf of the Western New York Mountain Bicycling Association, said, "The Western New York Mountain Bicycling Association is proud to have had the opportunity to work with the ECHDC to make the Buffalo Outer Harbor Bike a reality for the citizens of Buffalo and Western New York. We commend our federal, state and local representatives who have had the leadership, courage and vision to embark on the Outer Harbor project, which has unlocked lands for family recreational use that were otherwise lost to the community for generations. WNYMBA is committed to partnering with all stakeholders to ensure this beautiful marriage of nature and recreation reaches its full potential for the community for years to come."
The property being used by the public will also include environmental mitigation features mainly consisting of a soil cap and/or fencing.
The $5 million project is funded through Cuomo's Buffalo Billion initiative and the federal relicensing settlement with the New York Power Authority. Buffalo-based company Pinto Construction Services was awarded the contract for the work by Erie Canal Harbor Development Corp. The project will be complete in May 2019.
This is the latest in nearly $121 million in investments along Buffalo's Outer Harbor creating a series of destination points along the water's edge. 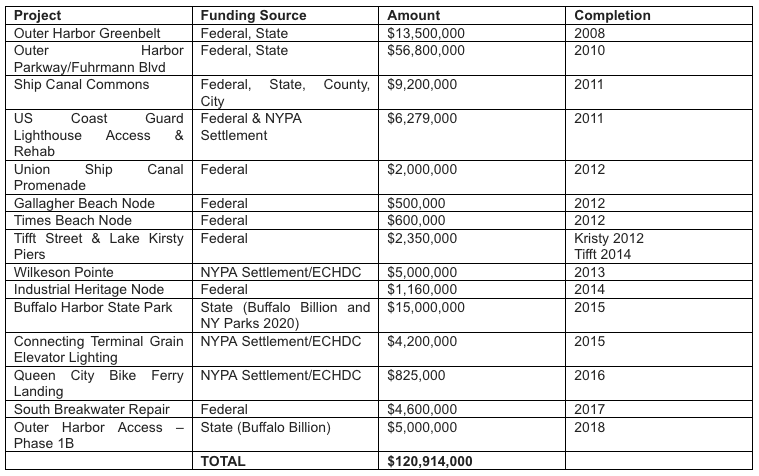