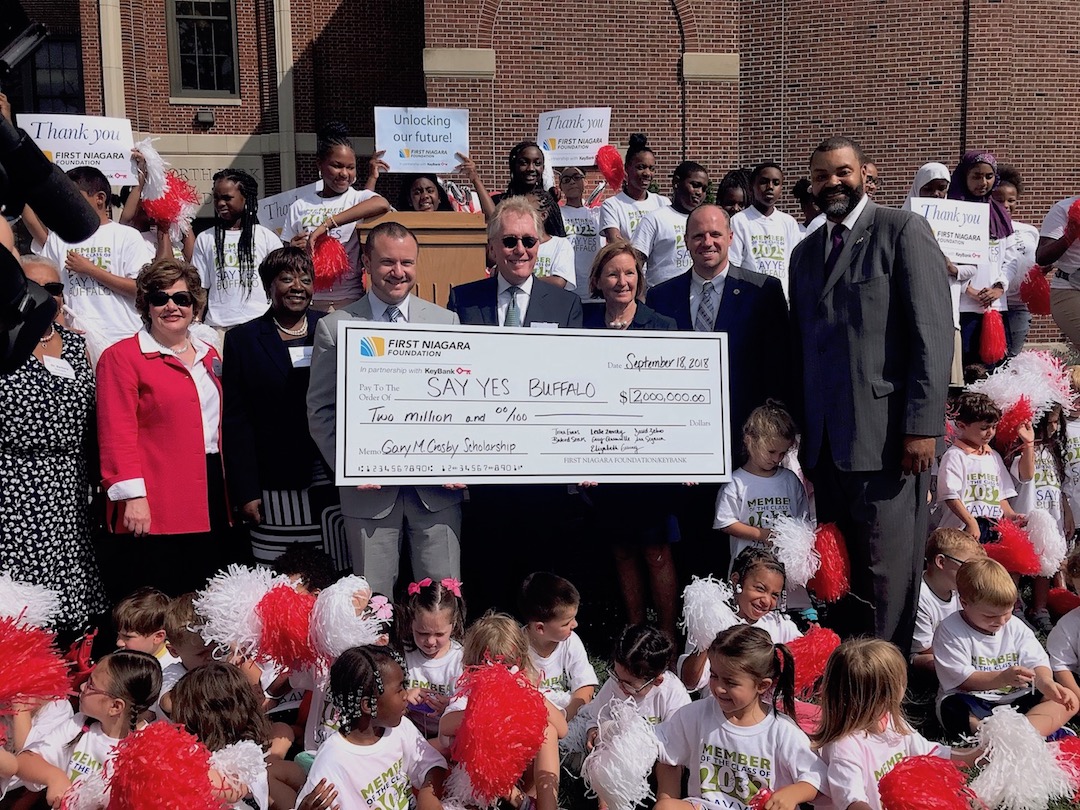 Tue, Sep 18th 2018 04:00 pm
Local commitments to $100 million endowment campaign now total more than $27 million to provide postsecondary scholarships to eligible Buffalo students in perpetuity
On Tuesday, First Niagara Foundation and KeyBank executives announced their continued support of Say Yes Buffalo with a $2 million gift to the organization's five-year, $100 million endowment campaign, which will ensure scholarship availability for eligible students forever. Including this donation, the First Niagara Foundation and KeyBank collectively have committed more than $4.1 million to the Say Yes Buffalo scholarship fund.
The gift, made in honor of President Gary Crosby, is part of the First Niagara Foundation's continued legacy of support to the Western New York community. The gift is the largest single donation in the foundation's history.
"This $2 million grant to 'Say Yes Buffalo' is the largest grant that the First Niagara Foundation has ever made in Western New York," said Elizabeth Gurney, executive director of the First Niagara Foundation. "We are big believers in the transformative and life-changing opportunities 'Say Yes' provides to every public high school graduate in Buffalo. We are thrilled that this gift, made in honor of our president, Gary Crosby, will empower and support students here for many, many years."
Announced in 2018, the Say Yes Buffalo Endowment Campaign aims to raise $100 million by 2023 to secure the availability of Say Yes' postsecondary scholarships and grants forever. To date, $37.5 million has been raised toward the $100 million goal.
"There is not a better way to honor Gary Crosby's commitment to and passion for education in Buffalo than with this landmark gift to 'Say Yes to Education,' " said Trina Evans, KeyCorp executive vice president and member of the First Niagara Foundation's board of directors. "All of us at KeyBank are proud to support the great work that 'Say Yes' does in Buffalo and the opportunities this great organization will provide for students for years to come."
Since the launch of Say Yes Buffalo in 2012, the Buffalo Public School District has seen promising results in high graduation and college matriculation as a result of the availability of a host of pre-K through 12th grade supports, college tuition scholarships and supports for students once they enroll in college. Since launch, the Buffalo public high school graduation rates have increased by 15 percentage points from 49 percent in 2012 to 64 percent in 2017. College matriculation rates have also increased from 57 percent in 2012 to 67 percent in 2017.
"We are honored to be chosen by the First Niagara Foundation as they make thoughtful decisions about which organizations to leave a lasting legacy," said Alphonso O'Neil-White, chair of the Say Yes Buffalo scholarship board. "Both the First Niagara Foundation and KeyBank are strong supporters of the mission of the Say Yes Buffalo Partnership beyond financial support. They mentor our students as they transition to college, they provide internship experiences and they support the development of the community school initiative. Their holistic commitment should be recognized and is graciously appreciated."
The Say Yes Buffalo Partnership is an education-based initiative that provides a powerful engine for long-term economic development, which will radically improve the life course of public school students in the City of Buffalo. Catalyzed by a locally funded scholarship program and bolstered by a successful national model that includes support for districtwide school improvements and alignment of community and public support services, Say Yes Buffalo aims to increase educational attainment of the students in the Buffalo Public Schools. To accomplish this, Say Yes Buffalo partners collectively address financial, academic, health and social/emotional barriers to educational attainment to ensure all students have the tools to successfully earn a postsecondary degree.
Categories
Around WNY Business Feature Dispatch feature Home feature NFP