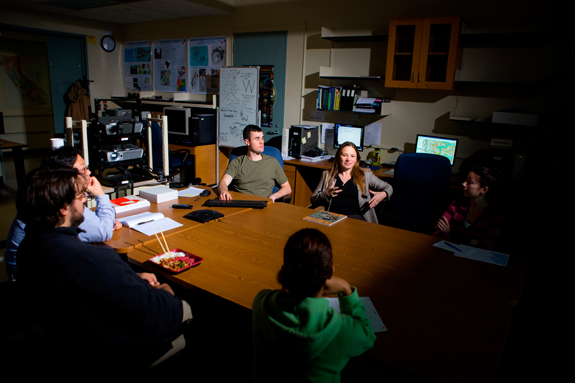 Wed, Aug 29th 2018 02:40 pm
Several UB researchers have projects tied to the satellite - including geophysicist Beata Csatho, who will attend September launch & helped plan mission's science goals
By the University at Buffalo
As the Sept. 15 launch date for NASA's new ice-monitoring satellite approaches, University at Buffalo scientists are among many worldwide who are counting down the days.
They're excited, but nervous, too. That's what happens when your future research is reliant on equipment that's going to be hurled, atop a flaming rocket, into the harsh environs of outer space. Or when - as in the case of UB climate scientist Beata Csatho - you actually helped to build the thing that's blasting into orbit.
"There is so much that goes into these missions. We all want it to succeed," said Csatho, Ph.D., chair of geology in the UB College of Arts and Sciences. "After the satellite makes it into orbit, there is a commissioning period. This is when people will be checking to make sure that the satellite is making accurate measurements."
Csatho - one of hundreds of scientists and engineers who worked on the mission - will be at Vandenberg Air Force Base in California for the September launch of NASA's Ice, Cloud, and Land Elevation Satellite-2 (ICESat-2).
From 2011-14, she led the science definition team that helped determine the satellite's scientific requirements, such as the precision of the laser-based research instrument on board.
Once in orbit, ICESat-2 is expected to be a vital tool in understanding the impacts of climate change. The satellite will use laser pulses to measure the elevation of the surface of the Earth, covering the Arctic and Antarctica in detail every 91 days - data that will enable scientists to calculate the changing thickness of ice sheets, glaciers and sea ice.
This work will address important questions in a warming world. For example: How much will sea level rise in coming years? How will coastal communities be affected, from remote island nations like Tuvalu to huge metropolises like Shanghai, Rio de Janeiro and New York City?
"In the past few years, there have been changes in ice sheet behavior, especially in elevation, which is connected with sea level rise," said Anton Schenk, Ph.D., UB research professor of geology, who will head to California with Csatho to witness the ICESat-2 launch. "Are these changes temporary or permanent, and where are they happening? Our work is all about trying to find trends in the data."
At UB, Csatho and Schenk are among several researchers engaged in projects that intend to use data from ICESat-2 to learn about the Earth's glaciated regions. Collaborators include Abani Patra, Ph.D., professor of mechanical and aerospace engineering in the School of Engineering and Applied Sciences and director of the computational and data-enabled science and engineering (CDSE) program; and Prashant Shekhar, Ph.D. candidate in CDSE.
The UB ICESat-2 team's projects include:
•Developing novel techniques for converting raw data from ICESat-2 into useful elevation measurements. The satellite tracks the amount of time it takes for single photons in laser pulses to travel to the planet's surface and back, and scientists must use advanced calculations to translate this data into accessible measurements of height.
•Tracking changes in the height of ice sheets using new approaches that build on a computational method called surface elevation reconstruction and change (SERAC) that Schenk and Csatho previously developed and continue to enhance with collaborators. To achieve this, ICESat-2 elevation data will be processed and integrated with data from past ice-monitoring missions, including the original ICESat, in operation from 2003-09, and airborne surveys completed in intervening years.
•Creating an early-warning system that alerts scientists about sections of the Greenland or Antarctic ice sheets that may be about to undergo significant change, such as radically accelerated melting.
"It is really exciting research," Csatho said. "One of the things that's great about ICESat-2 is that you have the chance to work with people from all over, from different places. It's a closely knit community of many, many scientists that work on these projects. You don't just see them once - you are on email with them every day, sharing ideas."
On Sept. 15, she'll have the chance to see many of them again in person as they meet at Vandenberg Air Force Base, watching, together, as their work takes flight.
Categories
Home feature NFP School