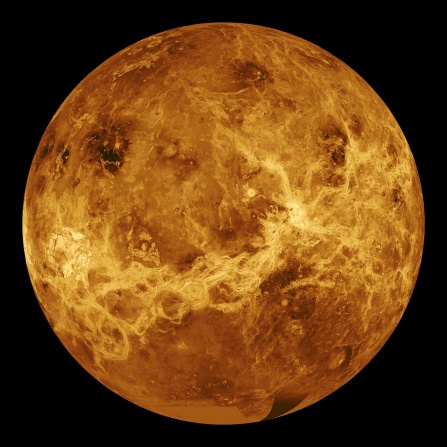 Fri, Aug 10th 2018 07:25 pm
The unmanned mission — still in the early planning stages — could include an orbiter and lander
This week, University at Buffalo geologist Tracy Gregg is in Moscow for a scientific meeting. Next stop? Venus.
That's the plan, at least.
Gregg won't be going to Venus herself, but she is serving as U.S. co-chair of a U.S.-Russian team tasked with mapping out potential scientific goals for Venera-D, an unmanned Russian mission to the planet.
The endeavor, still in its early planning stages, could include an orbiter and a lander that visits the surface of the hot, rocky world. An aerial platform — such as a balloon or airship capable of operating for three months in Venus' harsh atmosphere — is also under discussion.
"By learning about Venus, and the differences between Venus and Earth, we can better understand how planets develop to support life," says Gregg, Ph.D., a volcanologist and associate professor of geology.
"If you think about the solar system, Venus and Earth are like twins: They're about the same size, the same mass, the same distance from the Sun," she says. "And yet, Earth is this vibrant world that supports life, while Venus has an average surface temperature of about 850 degrees Fahrenheit and clouds made from sulfuric acid. Why are they so different? When did they diverge in their evolution? These two planets should be twinners. They should be exactly alike — but they're not."
The group Gregg is co-chairing — the Venera-D Joint Science Definition Team — is meeting from Aug. 7-10 in Moscow. It includes NASA-sponsored scientists, as well as Russian colleagues supported by Roscosmos, the Russian space agency. The Russian co-chair is Ludmila Zasova of IKI (the Russian Academy of Sciences' Space Research Institute).
Participants have a specific objective: identifying research questions that the Venera-D mission could answer, and generating a list of scientific instruments that could be useful in Venus exploration.
The work is exciting for Gregg, who has used data from past space missions to study volcanoes on Venus, Mars, the Moon and elsewhere in the solar system. Much of Gregg's research has been funded by NASA, as is her participation on the Venera-D team.
"For me, this is a chance to help build a mission from the ground up, to get involved in nitty gritty details," she says. "I think of it like a restaurant: You have the diner who enjoys the food. You have the farmer that produces the raw ingredients, and the chef that designs the meal. I've always been the diner. Now I'm taking more of the chef or farmer position."
After the science definition team has completed its work, it will be up to space agency administrators and policymakers to decide what equipment and vehicles to include in the Venera-D mission. Engineers designing any landers or aerial ships will then face the challenge of crafting machines sturdy enough to take on Venus.
"Imagine parking your car in an oven and spraying it with sulfuric acid," Gregg says. "That's what these engineers will have to deal with."
She says if all goes well, the proposed Venera-D mission could launch in about a decade, though no firm date has been set.
Categories
Home feature NFP