Sat, Aug 4th 2018 07:00 am
The Solarize Grand Island campaign is well underway. The campaign has signed up over 60 residents for free evaluations. The campaign has held three workshop events and four table events throughout June and July with more planned.
The campaign is in its last month and the campaign committee plans to reach out to Grand Island residents with events in August, including:
•Tuesday, Aug. 14 - Grand Island Town Hall courtroom from 7 to 9 p.m. with refreshments and a presentation.
•Thursday, Aug. 30 - Bogey's at Beaver Island State Park, from 7 to 9 p.m. hors d'oeuvres, refreshments and music along with a presentation on rooftop solar.
These two events will be the last opportunities to take advantage of the Solarize Grand Island exclusive promotional rates.
The main focus of the campaign was NYSERDA's educational program for rooftop solar installations.
Grand Island Councilwoman Beverly Kinney, team leader of Solarize Grand Island, has a large diverse Solarize Team of community leaders.
"Sure they care about cheaper power, don't we all? But, I don't believe that is the only reason why these volunteers are taking time away from their families and jobs and are dedicating a whole summer to this program," Kinney said. "They care! They want to leave Grand Island a better place for their children and grandchildren. They want to leave the air, water and the soil cleaner for the next generation."
Councilwoman Jennifer Baney said, "There is an understandable fear when it comes to roof-mounted solar panels and the installation. People hesitate because of their inability, due to time or resources to properly vet a company. That is the core of Solarize."
The Solarize Team, learned about solar panels, and through a competitive process, proposals were submitted. The team took unbiased evaluations from NYSERDA and its own interviews of the companies to doubly vet the chosen installer.
Kinney and Baney both agreed that it has been rewarding to serve on the Solarize Grand Island campaign team.
"At the core, it is a terrific example of one of the joys of serving as public officials: the chance to make a significant difference in the lives of our citizens," they said. "We think one of the additionally rewarding parts of the process thus far has been the collaborative efforts of our team. Our meetings, which have been frequent, have been focused, civil, and effective. A local representative, Jason Kulaszewski, clean energy coordinator, from the UB Regional Institute, has commented on the effectiveness, as a short-term campaign such as this requires all hands on deck, but also all of them pulling in the same direction. When you hear from those on the outside that your team stands out, it's reassuring. We are not surprised we were the first community to have a Solarize campaign begin this calendar year, while securing a promotional grant as well."
The website www.solarizegrandisland.org will have a calendar listing everywhere that an installer and committee representatives will be. 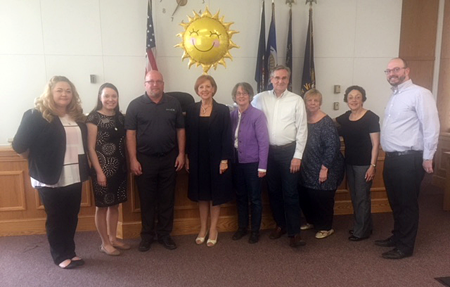 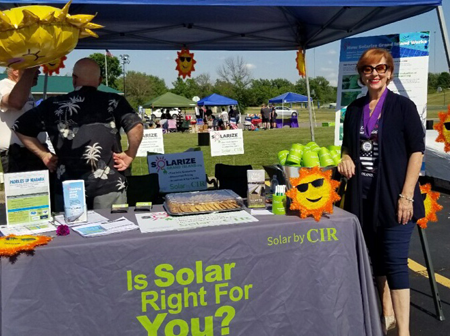 Kinney is pictured at an event with information.
Categories
Dispatch NFP
comments powered by Disqus