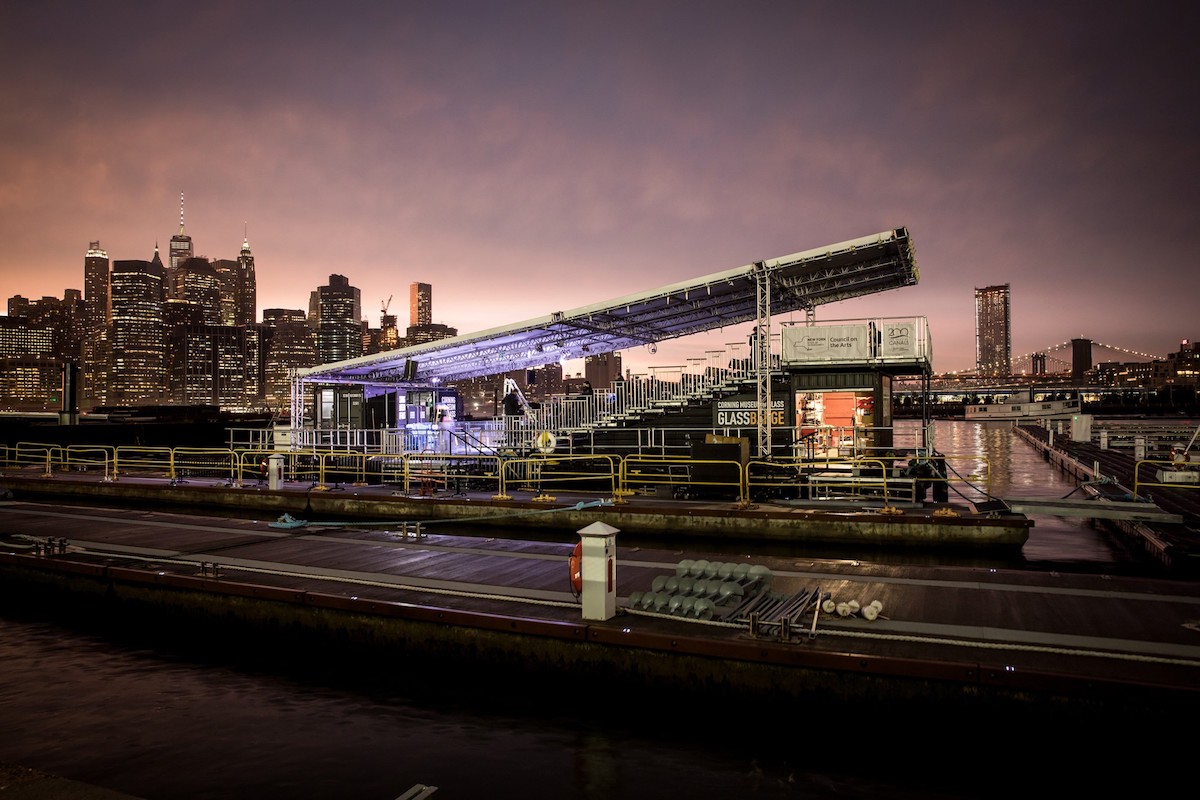 The GlassBarge in Brooklyn. (Photo courtesy of Corning Museum of Glass)

Fri, Aug 3rd 2018 06:30 pm
Canalside is a proud partner to GlassBarge during the Erie Canal Bicentennial Celebration
The Corning Museum of Glass (CMoG) GlassBarge tour arrived at Canalside on Friday. The 2018 GlassBarge tour will be docked at Canalside from Aug. 3-5. As the 2018 signature event for the statewide celebration of the Erie Canal Bicentennial, GlassBarge will offer free public glassmaking demonstrations during its visit.
"We are bringing together the fun of Canalside, the history of the Erie Canal, and the heritage of glass-making in New York," Lt. Gov. Kathy Hochul said. "This once-in-a-lifetime experience showcases the best New York has to offer while celebrating our incredible history."
Guests were invited aboard the 30-by-80-foot canal barge equipped with the museum's patented all-electric glassmaking equipment. The event kicked off with an impressive hot glass "ribbon" cutting and a glassblowing demonstration, as well as a tour of the Lois McClure, a historic schooner from the Lake Champlain Maritime Museum.
Through Sunday, CMoG will offer free public glassblowing demonstrations at Canalside aboard GlassBarge as part of a four-month tour across the waterways of New York. Demos run from 11 a.m. to 6 p.m. with the last show beginning at 5 p.m. Demonstrations are free, but tickets are required and available at www.cmog.org/GlassBarge.
GlassBarge commemorates the 150th anniversary of the Brooklyn Flint Glass Company - now known as Corning Incorporated - relocating to Corning via the New York waterways by canal barge. In addition to sharing the story of glassmaking in Corning, the GlassBarge tour emphasizes the continued role of New York's waterways in shaping the state's industry, culture, and community.
GlassBarge began its tour in Brooklyn on May 17 and traveled north on the Hudson River, westward along the Erie Canal from Albany to Buffalo, eventually making its way to the Finger Lakes. The ceremonial last leg of the trip will take place by land, concluding in Corning with a communitywide celebration on Sept. 22.
"On behalf of Gov. Cuomo, we welcome the GlassBarge tour to Canalside," said Robert Gioia, chairman, Erie Canal Harbor Development Corp. "The glass-blowing demonstrations will fit in perfectly with the other activities more than a million people enjoy each year at Canalside."
New York State Canal Corp. Director Brian U. Stratton said, "Buffalo is a prime example of the transformative impact the Canal System has had and continues to have on New York state's economy and culture. We, at the Canal Corp., are thrilled to see the Corning Museum of Glass GlassBarge come to Western New York to celebrate this area and New York's rich maritime industrial heritage. All across the Canal, all this summer, this moving museum has helped educate New Yorkers about the history of innovation and invention that the Canal System has inspired in the Empire State for the last century. We, for one, are excited about all the economic and tourism benefits the Canal System will bring to New York State in the future."
"We are thrilled to partner with Visit Buffalo and Canalside to bring to life the historic waterway in their community," said Rob Cassetti, senior director, creative strategy and audience engagement at CMoG. "The Corning Museum of Glass has taken mobile glassmaking around the world, and we can't wait to share the beauty of this endlessly versatile material with our closest neighbors across New York state."
"The GlassBarge's Buffalo visit brings together two great New York visitor attractions: the Corning Museum of Glass and Canalside," Visit Buffalo Niagara President and CEO Patrick Kaler said. "The GlassBarge will give visitors yet another reason to explore our redeveloped waterfront and resurgent destination this summer."
A flotilla of historic ships accompanying the GlassBarge include the Lois McClure, a replica of an 1862 canal barge, and the C.L. Churchill, a 1964 tugboat - both part of the Lake Champlain Maritime Museum's permanent collection. The museum will share the story of 19th century canal life and how materials were shipped on New York's waterways. On the Erie Canal, GlassBarge will be moved by an historic tug from the fleet of the South Street Seaport Museum, connecting upstate and downstate by water.
Categories
NFP Top Around WNY Feature