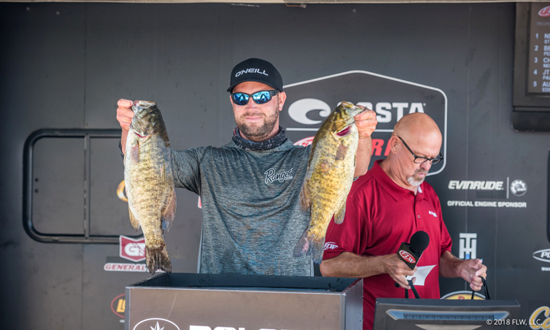 Mon, Jul 30th 2018 11:30 am
Farlow wins $87,000, including new Ranger boat
Pro Neil Farlow of St. Catharines, Ontario, Canada, won the Costa FLW Series Northern Division event on Lake Erie presented by Polaris with a single-day catch of five bass weighing 24 pounds, 4 ounces, after high winds forced tournament officials to shorten the three-day event to one day of competition. Farlow's weight was caught on Thursday and was enough to earn him the top prize of $87,500, including a new Ranger Z518 with a 200-horsepower outboard engine.
"It feels awesome to win one of these tournaments," said Farlow, who earned his first career win in FLW competition. "I've been thinking about this tournament since the schedule was released, and I put in a lot of time preparing for it. I was ready for three days out there, but the wind had a different plan."
Farlow said he fished his way from Point Abino on the Canadian side of Lake Erie, to Myers Reef on the U.S. side, and then back in toward Buffalo. He said of the six areas he worked through, four of them produced his biggest fish.
"I fished old spots and anywhere I could get to where there weren't any boats around," Farlow said. "I was boat No.156, so I had to keep running until I found something that didn't have anyone around. I think that's what made the difference."
Farlow said bottoms that were a mix of rock and gravel or gravel and sand produced best for him.
"I fished in 20 to 40 feet of water, but most of the fish were 20 to 30 feet down," he said. "I fished basically anywhere there was something different - a depth change, hump or a boulder."
Farlow said he caught around eight bass throughout the day, including the largest of the event - a 6-pound, 6-ouncer - around 9 a.m. He weighed his fish all from one lure - a green-pumpkin-colored Reaction Innovations Flirt Worm on a drop-shot rig.
"I did what pretty much everyone else was doing, which was using drop shots and tubes," Farlow said. "I didn't catch many fish, because some of the crowded spots were the ones that had more fish in them, so I ended up going after more individual fish that were bigger. I had less bites and it was stressful, but I knew that if I did get a bite it would be the right size."
The top 10 pros on Lake Erie finished:
A complete list of results can be found at FLWFishing.com.
Farlow's 6-pound, 6-ounce bass - the biggest bass of the tournament in the Pro Division - also earned him Thursday's Boater Big Bass award of $300.
Sakae Ushio of Tonawanda won the co-angler division and a Ranger Z175 with a 90-horsepower outboard motor. Ushio earned his win with a one-day catch of five bass weighing 23 pounds, 7 ounces.
The top 10 co-anglers on Lake Erie finished:
Sowers caught the biggest bass of the tournament in the co-angler division Thursday, a fish weighing 6 pounds, 6 ounces, and earned the day's co-angler Big Bass award of $200.
The Costa FLW Series on Lake Erie was hosted by the Buffalo Niagara Sports Commission. It was the second of three Costa FLW Series Northern Division tournaments of the 2018 regular season. The next Costa FLW Series tournament will be the final Northern Division event of the year, held Sept. 6-8 on 1000 Islands in Clayton, New York, and presented by Navionics. For a complete schedule, visit FLWFishing.com.
The Costa FLW Series consists of five U.S. divisions - Central, Northern, Southeastern, Southwestern and Western - along with the International division. Each U.S. division consists of three regular-season tournaments with competitors vying for valuable points that could earn them the opportunity to compete in the season-ending Costa FLW Series Championship. The 2018 Costa FLW Series Championship is being held Nov. 1-3 on Lake Guntersville in Guntersville, Alabama, and is hosted by the Marshall County Convention and Visitors Bureau.
For complete details and updated information, visit FLWFishing.com.
FLW is the world's largest tournament-fishing organization, providing anglers of all skill levels the opportunity to compete for millions in prize money in 2018 across five tournament circuits. Headquartered in Benton, Kentucky, with offices in Minneapolis, FLW and their partners conduct 286 bass-fishing tournaments annually around the world, including the U.S., Canada, China, Italy, South Korea, Mexico, Portugal, South Africa and Spain. FLW tournament fishing can be seen on the Emmy-nominated "FLW" television show, broadcast to more than 564 million households worldwide, while FLW Bass Fishing magazine delivers tips from top pros.
Categories
Home feature NFP