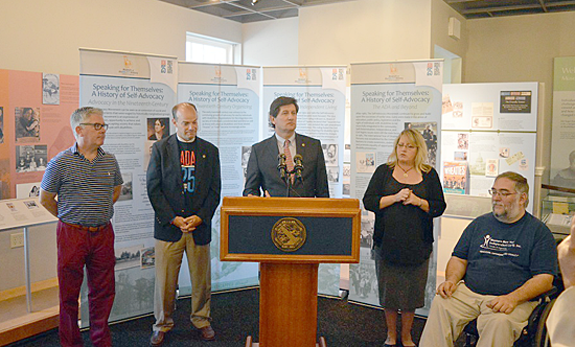 Erie County Executive Mark C. Poloncarz (at podium) is joined by (from left) Kevin Horrigan of People Inc., Executive Director of the Erie County Office for the Disabled Frank Cammarata, Andrea Russell of Deaf Access Services, and Todd Vaarwerk of WNY Independent Living Inc. at the Museum of disABILITY History in Buffalo to celebrate the 28th anniversary of the passage of the Americans with Disabilities Act.

Thu, Jul 26th 2018 05:05 pm
Americans with Disabilities Act passed in 1990, prohibiting discrimination against individuals with disabilities
July 26 marks the 28th anniversary of the passage of the Americans with Disabilities Act (ADA), a civil rights law that prohibits discrimination against individuals with disabilities in all areas of public life, including jobs, schools, transportation and all public and private places that are open to the general public.
Erie County Executive Mark C. Poloncarz today joined Executive Director of the Erie County Office for the Disabled Frank Cammarata, People Inc. Associate Vice President of Public Affairs Kevin Horrigan, and representatives of several agencies serving the disabled community at the Museum of disABILITY History in Buffalo to celebrate the anniversary of ADA passage and discuss surrounding weekend festivities.
"The passage of the ADA was a watershed moment in America, for the first time ever extending equal protections under the law to individuals with disabilities and ensuring that they enjoy the same rights as nondisabled Americans do," Poloncarz said. "While much has changed in 28 years, more work remains to be done and we must always be vigilant in safeguarding these rights. I thank Executive Director Cammarata and our many partners for the work they do every day to make our community more accessible, more inclusive, and more welcoming for individuals with disabilities."
The ADA gives civil rights protections to individuals with disabilities similar to those provided to individuals on the basis of race, color, sex, national origin, age and religion. It guarantees equal opportunity for individuals with disabilities in public accommodations, employment, transportation, state and local government services, and telecommunications. The ADA defines an "individual with a disability" as a person who has a physical or mental impairment that substantially limits one or more life activities, has a record of such impairment, or is regarded as having such an impairment.
Cammarata said, "Since 1990, only 28 years ago, the Americans with Disabilities Act continues to be landmark civil rights legislation for all people with a disability, and the ADA affects all people, from curbcuts on sidewalks, ramps and door openers at public offices and reasonable accommodations in workplaces. This law is about ensuring equal access and equal opportunity for every person."
On a related note, the Disability Pride Parade and Festival, presented by the WNY Independent Living Inc. family of agencies, includes three days of fun. It runs Saturday (Parade: 10:30-11:30 a.m. from City Hall to Coca Cola Field; Festival: 11:30 a.m. to 3 p.m. in the VIP section at Coca Cola Field), Sunday (Canalside, 9 a.m. to 4 p.m., adaptive water sports) and Monday (ADA Buffalo Bisons Game at 7:05 p.m. inside Coca Cola Field; tickets to the game will be given out to the first 250 attendees at the festival).
For more information on the WNYIL family of agencies and the Disability Pride Parade and Festival, visit http://wnyil.org/Events/Disability-Pride; on the Erie County Office for the Disabled, visit http://www2.erie.gov/ecod/; or on the Museum of disABILITY History, visit http://museumofdisability.org/.
Categories
Home feature NFP