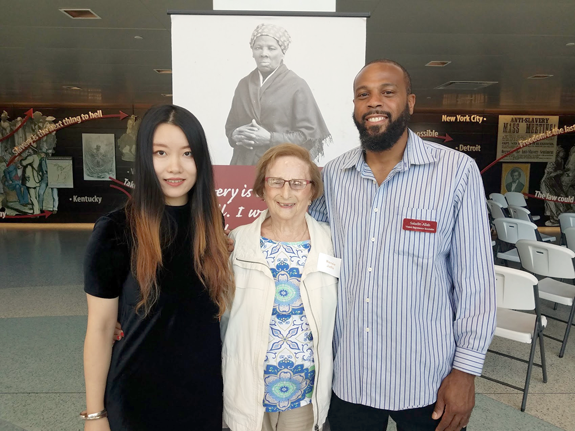 Wed, Jul 25th 2018 06:30 pm
Leadership from The Niagara Falls Experience of True Bethel Baptist Church and the Jewish Community Relations Council (of Buffalo Jewish Federation), along with two Holocaust survivors, experienced the newly opened Niagara Falls Underground Railroad Heritage Museum last Thursday.
The Heritage Center overlooks the site of the former International Suspension Bridge, now the location of the Whirlpool Bridge. Countless refugees from slavery, including Harriet Tubman, crossed the Suspension Bridge to freedom in Canada, where slavery was abolished in 1833.
"The location of the museum adjacent to the remnants of the suspension bridge is significant, because visitors can gaze out our windows, see Canada mere yards away, and imagine the heart-pounding final moments freedom-seekers must have experienced before reaching the far shore, where the law recognized them as human rather than as property. The significance of that bridge is palpable here," said Christine Bacon, program and interpretation specialist at the Heritage Center.
Pastor Craig Pridgen joined the Buffalo Jewish Federation in December on an interfaith clergy trip to Israel.
"When the museum opened in May, it was a natural that we bring our groups to experience it together," he said.
Co-chair of the JCRC, Dr. Ted Steinberg, said. "The museum is dedicated to peoples' resilience and determination, and those abolitionists who supported them. Holocaust survivors and the Jewish community members understand the significance of borders and transit points. There are much these communities can share and understand about each other."
Holocaust survivors Renee Joffe, born in France, and Dr. Nick Leibovic, born in Lithuania, were on the tour. Both are Jewish and fled the Nazis during WWII. Joffe, who speaks with many school groups, was saved by being hidden in a convent in France. She often says about smugglers, "Some were good, others turned families over to the Nazis."
Refugees from U.S. slavery faced similar uncertainty as they determined to seek freedom on the Underground Railroad.
"The museum paid tribute to those that sacrificed their own and their family's safety and drew my attention to just how many people suffered and never made it out. It reminded me of an exhibit at Yad Vashem (Holocaust Museum in Jerusalem, Israel), where candles are reflected infinitely in a dark and somber space, creating the impression of millions of stars shining - forcing you to confront the ongoing generational loss of the oppressed," said Buffalo's Jewish Community Relations Council Co-Chair Nina Lukin.
Karen Elam, director of the Jewish Community Relations Council of the Jewish Federation of Greater Rochester, said, "I was honored to be able to tour the museum with members of the JCRC of Buffalo Jewish Federation and the Niagara Falls True Bethel Baptist Church. The exchange that took place between members of these two groups at the conclusion of the tour was a profound reminder that we are more the same than different - a message that is especially needed today. The exhibit is so well-conceived and the tour guide so knowledgeable, I am excited to explore opportunities to bring groups from our community to visit the museum,"
The goal of the organizers is not only to understand history at WNY's doorstep, but also to understand the collective role in civil and human rights. Organizers said holding this event at the Niagara Falls Underground Railroad Heritage Center was a natural fit, as the venue's mission is to reveal authentic stories of Underground Railroad freedom seekers and abolitionists in Niagara Falls; inspire visitors to recognize modern injustices that stem from slavery; and take action toward an equitable society.
For more information, visit http://niagarafallsundergroundrailroad.org/.
Categories
Around WNY Home feature NFP