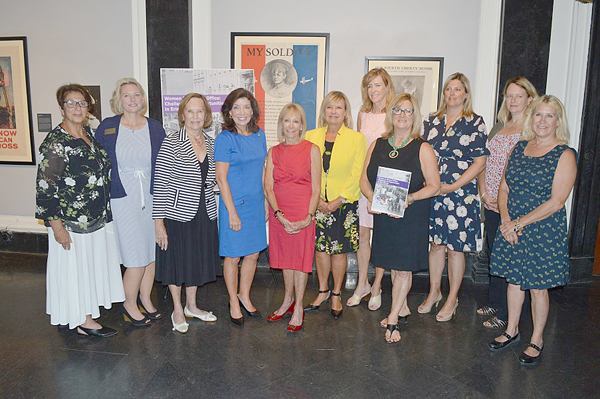 Executive Director of the Erie County Commission on the Status of Women Karen King (fourth from right, holding report) is joined by a host of current and former women elected officials, including Lt. Gov. Kathy Hochul (center, in blue), to announce the release of "Women in Elected Office: Challenges and Opportunities in Erie County," a report detailing women's historical political participation and representation in both Erie County and local municipal governments and outlining a number of challenges women face in seeking and holding elected office.

Mon, Jul 23rd 2018 03:05 pm
Poloncarz, Hochul join elected officials past and present at Historical Museum to present report
Report developed to identify obstacles faced by women in political participation; finds low numbers of women in legislative, executive positions
The Erie County Commission on the Status of Women ("ECCSW") on Monday released its report, "Women in Elected Office: Challenges and Opportunities in Erie County," detailing women's historical political participation and representation in both Erie County and local municipal governments, and outlining a number of challenges women face in seeking and holding elected office. Among other items, the report noted women have historically held fewer public offices, that men are 4.3 times more likely to win re-election than women, and women candidates are generally more successful in the county's larger towns but less successful in its cities.
Erie County Executive Mark C. Poloncarz joined Lt. Gov. Kathy Hochul, Executive Director of the ECCSW Karen King, representatives from First Amendment First Vote, and a host of distinguished women officeholders at the Buffalo History Museum to announce the report, which can be read HERE.
King said, ""Women comprise 52 percent of Erie County's total population and 53 percent of the county's registered voters, but, as this report shows, women are still vastly underrepresented in elected office. Women's voices, perspectives and vision are essential to shaping our community and need to be promoted across the political spectrum if we are to be a more diverse, tolerant and progressive region."
"Growing up, I always worked behind the scenes in politics, writing speeches and crafting legislation," Hochul said. "I didn't believe that I could run for elected office and faced many obstacles in doing so. Throughout my career serving on the Hamburg Town Board, as Erie County clerk, and representing the Western New York area in Congress, I was always surrounded by men. As the Erie County Commission on the Status of Women's report shows, there are still not enough women elected officials. As the state's highest-ranking elected woman, I'm proud to travel across the state and serve as a mentor for women and girls, encouraging them and supporting them to pursue elected office. We need more women in the corridors of power representing our values and advancing equality."
Poloncarz said, "I thank Karen King and the ECCSW for their work on this report, which offers valuable historical perspective on the paucity of women in local elected office and also serves as a blueprint for breaking down the challenges to getting them there. Women and girls should always be empowered and encouraged to seek office, serve their communities, and be the leaders we know they can be."
Current Erie County Legislator Lynne Dixon (9th District) was in attendance for the release as were current Town of Cheektowaga Supervisor Diane Benczkowski and current Town of Eden Supervisor Missy Hartman. Also in attendance: former New York State Sen. and Erie County Legislator Mary Lou Rath; former Erie County legislators Joan Bozer, Lynne Marinelli and Betty Jean Grant; former City of Buffalo University District Councilmember and Buffalo School Board member Bonnie Russell; and members of the ECCSW board.
The Women in Elected Office report also notes the number of women holding elected office in Erie County peaked in the late 1990s and early 2000s, but is currently on a downward trend. Currently, no women hold a mayoral office and only six women are town supervisors out of 25 supervisor offices. At the county level, since 1953, women have comprised 19 percent of county legislators, but there has never been a female county executive, district attorney or sheriff.
King added, "This report is a stark reminder of the hurdles facing women seeking elected office and the amount of work that needs to be done to overcome those obstacles, issues that we are working on every day. The ECCSW is participating in the First Amendment, First Vote! program to work with high-school age girls across NYS to prepare them to vote knowledgeably in their first election, to advocate for legislation as constituents, to connect with their elected representatives, and to explore political office as a career option."
For more information on the Erie County Commission on the Status of Women, visit http://www2.erie.gov/csw/.
Categories
Dispatch Home feature NFP