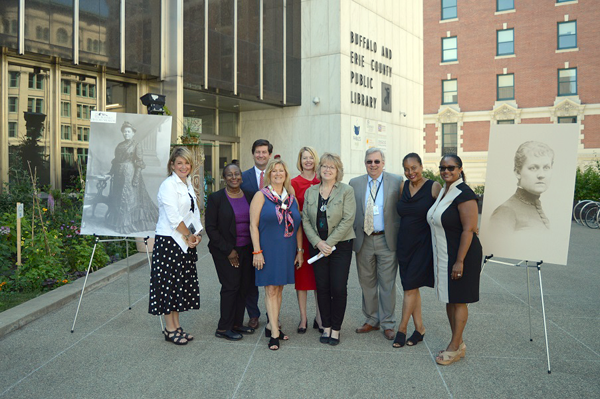 Erie County Executive Mark C. Poloncarz (back row, left) joins Executive Director of the Commission on the Status of Women Karen King (front row, third from left), Buffalo and Erie County Public Library Director Mary Jean Jakubowski (front row, center), and members of the monumental Women of WNY Committee to announce the Monumental Women of WNY project. The group is flanked by portraits of Mary Talbert (left) and Louise Bethune (right), who will be the first two women honored by the project.

Monumental Women of WNY to be recognized in new project

Thu, Jul 19th 2018 03:20 pm
Monument will celebrate trailblazing women of Western New York; seeks to 'unearth the hidden history of women'
The Erie County Commission on the Status of Women and the Monumental Women of WNY Committee have announced a new program to highlight the achievements of Western New York women. Monumental Women of WNY will recognize trailblazing women of WNY through the placement of a series of public monuments and plaques that will highlight the "hidden history" of women in public life, and help to raise awareness of the many contributions women have made to this region.
In Buffalo, there are 106 public statues, of which two are of women. Of the 5,193 public statues across the U.S., only 394 are of women.
"Statues and monuments that celebrate the achievements of men are commonplace, so much so that the absence of such monuments to women is conspicuous and concerning. Women have played integral roles in the shaping of our country and community in politics, business, education and many more areas," Erie County Executive Mark C. Poloncarz said. "This project is a breath of fresh air and will be a welcome addition to our public spaces, celebrating the accomplishments of women here in Erie County and recognizing that their successes have helped build our region."
Karen King, executive director of the Commission on the Status of Women, said, "WNY is home to a rich legacy of trailblazing women who have made immeasurable contributions to our community, but for the most part have gone unrecognized for their efforts. It's time to unearth this hidden history and share this legacy with our entire community. We are hoping to have the first three monuments completed by 2020 to mark the 100th anniversary of the women's suffrage movement, and we invite the public to be a part of this exciting project, as well."
Three monuments are planned for the inaugural round of the project. The first recognizes Louise Bethune, the first professional woman architect in the U.S. Bethune practiced from 1881-1913 and includes the Lafayette Hotel among her significant and enduring architectural achievements. She was also a founding member of the Buffalo Women's Wheel and Athletic Club.
The second monument will recognize civil rights leader Mary Talbert, a founder of the Niagara Movement, which was a precursor to today's NAACP. A staunch and tireless advocate for civil and women's rights, Talbert served as a member of the Women's Committee of National Defense in World War I and was appointed to the Women's Committee on International Relations following the war.
The Erie County Commission on the Status of Women is seeking public input on the third monument, soliciting the public's ideas on which monumental woman should be recognized and celebrated to complete the first round of monuments.
For more information on the Erie County Commission on the Status of Women, visit http://www2.erie.gov/csw/; on Monumental Women of WNY, visit https://www.monumentalwomenwny.com/.
Categories
NFP Top News