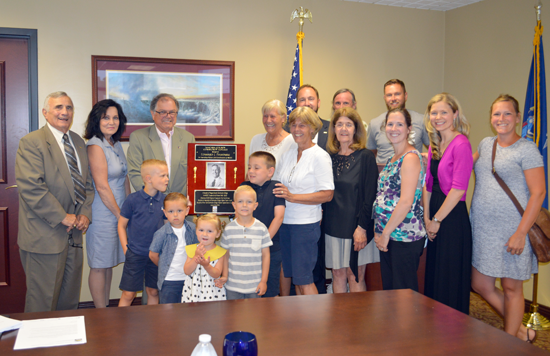 Fri, Jul 13th 2018 08:15 pm
Edward Pawenski was honored posthumously for his dedication to the establishment of Niagara County Community College at the June board meeting. The board of trustees passed a resolution to honor Pawenski for his service to NCCC, presenting a plaque to his family, including his grandson - Niagara County Legislator Richard Andres.
Pawenski was a member of the Niagara County Board of Supervisors from 1958-60 and was instrumental in passing a resolution to establish a community college in Niagara County. He then served on the board of trustees for NCCC from 1960 to 2012, becoming the longest-serving trustee in New York state.
Pawenski received the Special Achievement Award from the Association of Community College Trustees in 1987, the highest award a trustee can receive in the SUNY system, and was one of two recipients of the ACCT Founders' Award given to those responsible for founding community colleges in New York state. A prestigious award presented by the New York Community College Trustees has been named in honor of Pawenski, presented to a business or industry that supports economic development and the community college mission in New York state and the U.S.
In addition to statewide recognition, current board of trustees President William Ross said, "The long tenure of Edward Pawenski as a board member puts in him an elite class of Niagara County officials, and his advocacy for NCCC was instrumental in taking the college from its infancy to the high status it has achieved today."
Pawenski and his wife, Frances, left a lasting legacy with NCCC as donors and sponsors of an annual scholarship provided to a student within a nursing or allied health program. Their example of service has led to continued giving and support by others in the region, promoting community service, achievement and involvement at NCCC.
The plaque will be on display in the Robert Michael Sdao Memorial Board Room in the Notar Administration Building on the college's Sanborn campus.
Categories
Around WNY NFP School feature Tribune