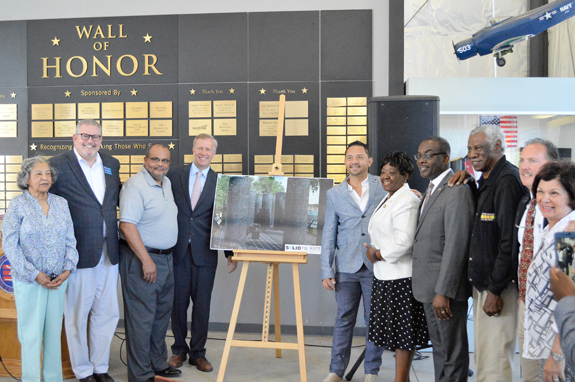 Tue, Jul 3rd 2018 05:45 pm
First-in-the-nation monument to honor all who served dating back to Revolutionary War
Assemblywoman Crystal D. Peoples-Stokes and New York State Sen. Chris Jacobs announced they have secured a combined $800,000 to support the construction of the nation's first monument dedicated solely to African-American veterans and service members.
The African-American Veterans Monument, projected to cost approximately $1.4 million, will be located on the grounds of the Buffalo and Erie County Naval and Military Park on Buffalo's waterfront.
"I am very appreciative of Sen. Jacobs' commitment to helping make this project a reality," Peoples-Stokes said. "Having another attraction for the Buffalo & Erie County Naval & Military Park along with Canalside can only be a good thing, especially an attraction that pays homage to the bravery and sacrifice made by people of color throughout our country's history. I'm very thankful to the Eric County Chapter of the Links for inspiring this idea, our committee members for all their hard work, and for all of our supporters."
Jacobs said, "African-Americans have proudly and bravely served the United States of America since the Revolutionary War, and they continue to answer their country's call to this day. I am proud that Buffalo and Western New York, a community that sent many of its finest who served with such valor and a region with a long tradition of contributing to our country's military successes, will be home to this long-overdue memorial."
The monument will consist of 12 black concrete pillars representing each of the country's military conflicts that have occurred. The tops of the pillars will illuminate, serving as an eternal reminder of the sacrifices and commitment of African-American veterans.
"Today's announcement of another investment for Buffalo's African-American Veterans Monument project is another step toward getting our local African-American veterans who served in all 12 U.S. wars the recognition they deserve," said Buffalo Mayor Byron W. Brown. He noted the city donated land and is implementing the construction of the monument to honor veterans' courage and valor. "Thank you to Assemblywoman Crystal Peoples-Stokes for her vision and leadership on this project and for partnering with Sen. Chris Jacobs to secure a combination of $800,000 for the monument, ensuring that this new, first-of-its-kind monument will come to the Buffalo and Erie County Naval and Military Park and hopefully be dedicated later this year."
The origin of the African-American Veterans Monument was a 2014 effort to record the names of all deceased Western New York African-American Veterans by the Erie County Chapter of the Links, a fraternal and service organization of African-American women. Vice Chairman of the Naval & Military Park's Board of Directors Warren Galloway serves as chair of the monument's planning committee.
"On behalf of the African-American Veterans Monument committee, and on behalf of the countless African-American Veterans this monument represents, I would like to thank Assemblywoman Crystal Peoples-Stokes and New York State Sen. Chris Jacobs for their support of the project," said Galloway, who's also a U.S. Air Force veteran. "This funding brings us that much closer to the reality of the monument's completion and, for that, I say, 'Thank you.' The honor that this monument pays respect to is long-overdue and I am glad to see that, with today's funding, we are one step closer."
"The Buffalo & Erie County Naval & Military Park is proud to be the future site for the African-American Veterans Monument," said the Naval & Military Park's interim executive director, Paul Marzello. "It is most fitting to be located here since our primary mission is to provide engaging and inspiring educational visitor experiences that preserve and honor the contributions of all veterans. We feel this monument will bring national attention to Buffalo and continue the momentum of creating new and exciting attractions along our waterfront for visitors to enjoy."
The monument's design was created by Jonathan Casey of Solid 716.
Supporters of the project continue to seek corporate sponsors and are anticipating a Veteran's Day 2018 dedication.
Categories
Around WNY Home feature NFP