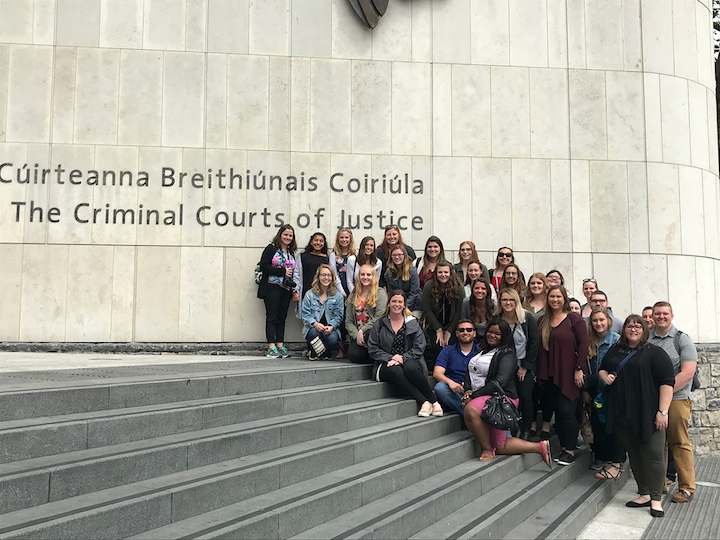 Wed, Jun 27th 2018 09:40 am
As he drove their private coach from Belfast to Dublin, Tony sang for them a mournful ballad of Derry (aka Londonderry), attempting to heal from a long history of sectarian conflict.
They were nearing the end of what had been a 16-day study abroad excursion (May 21-June 5) circling the Irish Isle, and Tony had accompanied them every mile. Tony laughed as Drs. Dana Radatz and Paul Schupp, along with their 27 Niagara University students, applauded and requested souvenir selfies with their driver-cum-balladeer.
This was the first time that Schupp and Radatz, criminology and criminal justice faculty members, led the study abroad program to the Republic of Ireland and Northern Ireland.
Officials at the Garda national police college in Templmore and the Police Services of Northern Ireland in Belfast hosted the Niagarans. At the former, the group learned about how one of the last police services to police without firearms understands its mission. In the latter, the group learned historical lessons in a context of terrorism and civil rights movement.
In Dublin, the Niagarans toured Trinity College, Ireland's oldest university, where they learned some of the newer buildings were just 150 years old. The college is home to the world-famous Book of Kells. Irish monks hand-painted this illuminated manuscript depicting the gospels with Christian and Celtic symbols.
An Irish barrister led students through a mock trial at the Criminal Courts of Justice in Dublin. There, they met with the manager of Citywide Drugs Crisis Campaign, where they learned about Ireland's drug crisis and response.
The Niagarans also toured infamous jails such as Dublin's Kilmainham Gaol, the Cork City jail, and Belfast's Crumlin Road Gaol, the "Crum," a fascinating way to learn about criminal punishment, colonialism and sectarian violence.
Fortunately, the luck of the Irish was with the Niagarans who enjoyed beautiful weather throughout their tour. The excursion also took the Niagarans to natural World Heritage sites, the Cliffs of Moher and the Giants Causeway. They also visited castles in Kilkenny and Blarney, where they kissed the famous stone, blessing each with the gift of gap.
The Ireland program was the third annual program Radatz and Schupp created and led focused on criminal and social justice themes and events. They collaborated with Dr. Diana Falco, a Niagara University alumna and former criminology and criminal justice professor at NU before founding her own educational tour operation, ExplorEd.
The students who traveled to Ireland were enrolled in Radatz's spring semester CRJ 397: comparative justice in Ireland and Northern Ireland course. The course prepared students and allowed them to bond.
The program is a brief, affordable, faculty-led option for students who want to add such experiences to their resumes but cannot afford to, or are uncomfortable with, studying abroad alone for a year. It is open to Niagara students in any class year studying in any major.
The Niagarans enjoyed their farewell dinner at the Brazenhead restaurant, Dublin's oldest public house. Students shared memories and celebrated friendships. The Niagarans raised a toast to their time in Ireland, where they made memories and celebrated friendships.
Radatz's plan for spring 2019 is to hold a course titled comparative justice in the United Kingdom, followed by an excursion to England, Scotland and Wales.
To learn more about Niagara University's undergraduate degree program in criminology and criminal justice and/or its graduate degree program in criminal justice, call 716-286-8080.
Categories
NFP School feature