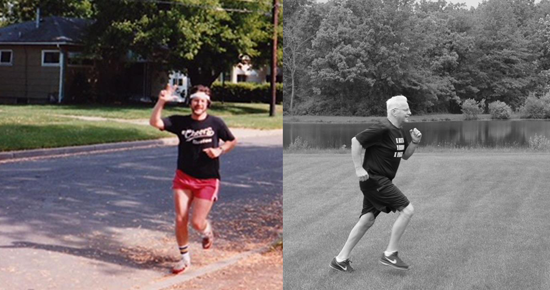 Dr. Tim Osberg doing what he does best.

Mon, Jun 11th 2018 01:20 pm
The date was June 4, 1985.
On a day when Ronald Reagan was still settling in for his second presidential term and most Americans were listening to "Everybody Wants to Rule the World" by Tears for Fears, or flocking to movie theaters to see "Fletch" or "Brewster's Millions," Dr. Tim Osberg went for a jog.
Then 29, and about to begin his fourth year as a faculty member in Niagara University's psychology department, Osberg set out for a two-mile run along Tonawanda Creek.
And he hasn't stopped. Not literally, of course, but Osberg has now jogged at least two miles a day every day for 33 years and counting (except for a five-week stretch while recovering from hernia surgery in 2011).
Think about it: Osberg, now age 62, has a daily running streak that's older than LeSean McCoy. When Osberg laced up his sneakers on that 65-degree Tuesday in Buffalo, Gilbert Perreault was still captaining the Sabres. The world hadn't yet gone "Back to the Future" with Marty McFly - the first time.
Setting such a profound milestone doesn't come without hurdles, mind you. Osberg has run through snowstorms, illness, injury, tragedy and 30-plus states. On the day that he was to reach the six-year mark of his first streak, his wife, Deb, went into labor with his first child, John. Nevertheless, the Grand Island resident completed his anniversary run in scrubs outside of the hospital after his son was born.
Osberg's initial streak lasted 9,481 days (nearly 26 years), which ranks 55th on the United States Running Streak Association's list.
Following hernia surgery in 2011, Osberg, while still in the recovery room, asked his surgeon, "Are you sure I can't run tomorrow?" His response - "Sure, if you want to meet me back in surgery tomorrow night" - halted the first running streak in what Osberg said was a very emotional experience.
Since restarting his jogging regimen, Osberg typically outruns his two-mile minimum. He said he averaged five miles a day last year, including several 13.1-15-mile runs that were spurred by an Apple Watch competition with his daughter, Erika, a fitness enthusiast and cycling instructor in New York City.
What advice does Osberg offer to anyone who, well, wants to follow in his footsteps?
"My goal was to 'run away' from poor health, and if the streak is not serving that purpose, it's pointless to continue," he wrote in an article for Furthermore magazine, where Erika works as a manager of marketing and social media. "Then and now, I must check in with myself to ensure it's a physically healthy practice, but also a mentally healthy one. With commitment to something like exercise, you always have to look at its impact on other parts of your life. If ever the desire to push yourself to keep a streak going is something that begins to weigh too heavily on you and becomes a daily stressor, that's a sign you should back off."
To learn more about NU's psychology programs, visit www.niagara.edu/psychology.
Categories
NFP