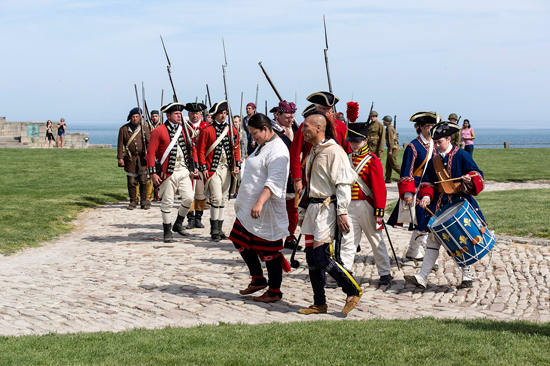 Visitors can interact with re-enactors representing three centuries of military history at Old Fort Niagara on May 26 and 27 at "Soldiers through the Ages. Guests can enjoy living history demonstrations all day and meet soldiers from the 18th century through World War II. (Photo by Wayne Peters)

Fri, May 18th 2018 09:25 pm
Old Fort Niagara welcomes the public to its "Soldiers through the Ages" military history re-enactment event on Saturday and Sunday, May 26 and 27, over Memorial Day weekend. This annual event features special displays of military vehicles, period camps from the 18th, 19th and 20th centuries, weapons demonstrations, uniform programs and hands-on activities for families. In commemoration of the centennial of the Battle of Cantigny in World War I, a special program will also be presented in the Fort Niagara Officers' Club.
"Old Fort Niagara sits on historic ground that has been touched by more than 300 years of military history," said Robert L. Emerson, executive director of the Old Fort Niagara Association. "Visitors have a chance to understand the scope of our history during 'Soldiers through the Ages,' plus it's a great way to make a memorable start to the summer season."
Schedule of Activities (both days)
Ongoing Exhibits: Military vehicles, rations, living history camps, militaria displays, World War I display at Officers' Club
Food and drinks will also be for sale at the Log Cabin.
Admission to "Soldiers through the Ages" will be $13 for adults, $9 for children ages 6-12, free for children under 6, and free for members of the Old Fort Niagara Association.
On Memorial Day, Monday, May 28, at 11 a.m., the VFW Lake Ontario Post 313 will hold a special memorial service at the historic Fort Niagara Cemetery. The public is invited and encouraged to attend.
Upcoming Re-Enactments:
June 9-10: Civil War Garrison: Travel back to the 1860s when the Union feared British intervention on the side of the Confederacy.
June 29-July 1: French and Indian War Encampment: Relive the Siege of 1759 when British and New York soldiers besieged French-held Fort Niagara. Battle re-enactments, large living history camps. The site's largest event of the year.
July 28-29: War of 1812 Grand Encampment: This event commemorates the fort's role in the War of 1812. Large-scale battle re-enactments and living history programs will make this the largest binational War of 1812 re-enactment of the year.
Aug. 18-19: Soldiers of the Revolution: This living history event recreates the War for Independence on the New York frontier. Battle re-enactments, hands-on activities for families, plus music and games.
Old Fort Niagara (www.oldfortniagara.org) is a Registered National Historic Landmark and New York State Historic Site operated by the Old Fort Niagara Association, a not-for-profit organization, in cooperation with the New York State Office of Parks, Recreation and Historic Preservation. The site is open daily from 9 a.m. to 5 p.m. with the last tickets sold at 4:30 p.m.
Categories
Home feature NFP Sentinel Sentinel feature Sentinel HP Feature Picture