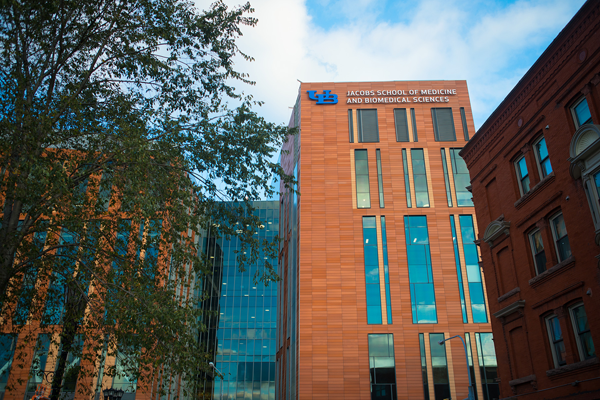 The Excelsior Award, which the Jacobs School of Medicine and Biomedical Sciences building has won, is part of a program created to highlight design excellence in publicly funded architecture in New York State. Only projects that were either completely or partially funded by New York state are eligible for this award. (Credit: Douglas Levere, University at Buffalo)

Wed, May 16th 2018 09:00 pm
The new home of the Jacobs School of Medicine and Biomedical Sciences at the University at Buffalo has won an Excelsior Award for public architecture in the category of New Construction from the American Institute of Architects New York State.
The Excelsior Award program was created to highlight design excellence in publicly funded architecture in New York state. Only projects that were either completely or partially funded by New York state are eligible for this award.
The building's design team was presented with the award at a ceremony held last month in Albany.
"This recognition is really important because this award program recognizes New York state publicly funded projects that are well designed holistically, incorporating the building systems with the aesthetics of the building," said Kelly Hayes McAlonie, director of campus planning, who attended the ceremony in Albany. "More importantly, it recognizes projects that positively impact their neighborhoods and communities. To be recognized in that company is very gratifying indeed."
Criteria for the Excelsior Award include the use of sustainable materials, systems and practices, and the responsible use of public funds to achieve the maximum public benefit.
The $375 million, 628,000-square-foot project was the first to receive NYSUNY 2020 Challenge Grant funding through legislation signed into law by Gov. Andrew M. Cuomo in 2011.
The building was designed by HOK, which won an international design competition to design it.
"Our design reflects the renewed optimism of the city," said Kenneth Drucker, design principal for HOK. "The building's exterior relates to the character of Buffalo and the Allentown neighborhood while creating a new, interdisciplinary medical learning environment."
Categories
NFP School feature Top News Features