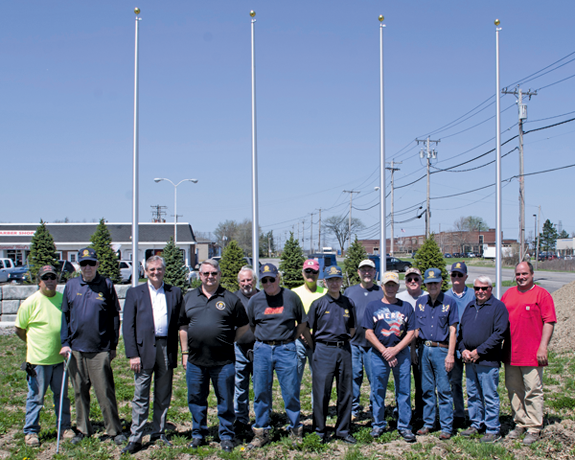 Supporters of the DeGlopper Memorial expansion were on hand as flagpoles were erected this week.

Sat, May 12th 2018 07:00 am
Progress continues on the DeGlopper Memorial expansion in spite of a rejection by the Buffalo and Erie County Greenway Fund Standing Committee to direct some funding to the project.
Nine new flagpoles were erected this week at the park, located at the intersection of Baseline Road and Grand Island Boulevard. Eight 25-foot tall poles and one 35-foot pole are going up. Glass plaques are planned at the foot of each new flagpole.
Supporters of the project are considering a protest at the park to voice their displeasure with a recent action by the Buffalo and Erie County Greenway Fund Standing Committee to deny funding for the park, which honors World War II Medal of Honor recipient Charles N. DeGlopper. One committee member had published his opposition to one element of the park: a statue of DeGlopper holding a Browning rifle that he used in making a one-man assault on an enemy position during the D-Day invasion.
Rus Thompson said Second Amendment supporters contacted him in an effort to voice their opinions. A noontime protest at the park Saturday is being considered.
"It's because of the gun," Thompson said of the standing committee's action. "I mean, we didn't win World War II by using sticks, you know? We used guns. He got killed by a gun. DeGlopper stood up there and took how many rounds of fire to save how many guys? And they're going to take away his gun?"
The protest is "supporting the whole memorial and kind of protesting the reasons why they turned this down," Thompson said.
Categories
Dispatch Dispatch feature NFP