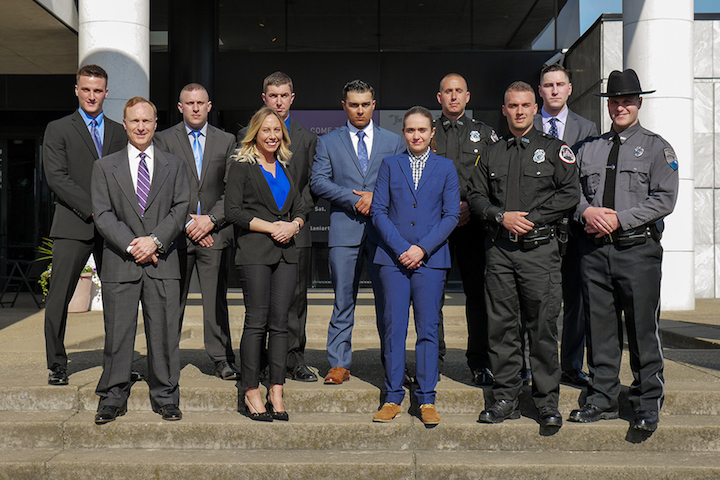 The graduates stand outside the Castellani Art Museum.

Thu, May 10th 2018 10:40 am
The Niagara County Law Enforcement Academy graduated its 66th class during a ceremony held Wednesday at Niagara University's Castellani Art Museum.
Niagara County Assistant District Attorney Peter M. Wydysh was the ceremony's keynote speaker. Wydysh, during his 13-year tenure with the county, has prosecuted a wide range of court cases that include approximately 1,000 drug crimes, burglaries, armed robberies and murders. The Lewiston resident is a graduate of Cornell University and the University at Buffalo Law School.
"You've shown your determination, your strength and your courage by going into this program pre-employment - and that deserves respect," Wydysh told the graduates. He noted he had been in a similar situation, volunteering in the DA's office for 10 months before he was hired.
Wydysh then imparted some words of wisdom on the graduates.
"Don't ever forget that we're the 'good guys,' " he said. "You're going to deal with people on the worst days of their lives and help them to start to pick up the pieces. It's honorable. At its most basic element, your job is to do the right thing. Not every job is like that. Your job is to help others, to put their interests before yours. You are the 'good guys.' "
Following Wydysh's remarks, NCLEA co-directors Lt. Shawn Grapes and Det. John Faso presented diplomas to this spring's graduates:
Eberth, a former Marine, was chosen as the 66th academy's class president. Reflecting on his experience over the past eight months, Eberth praised the educational model utilized by the NCLEA directors.
"The common focus from both Lt. Grapes and Det. Faso was to ensure that our training prepared us for what was most important: to go home at the end of our shifts," he said. "We just can't thank the directors enough for the Saturdays and late nights they spent with us to mold us into police officers. We promise to be disciplined and to never disappoint you."
Award recipients:
Niagara University is the only four-year, private college in New York to host a full-time police academy. Coordination of the program on Niagara's campus is undertaken by the university's Office of Continuing Education and criminal justice department.
For more information about the Niagara County Law Enforcement Academy, call 716-286-8759 or email [email protected].
Categories
NFP Top Around WNY Feature