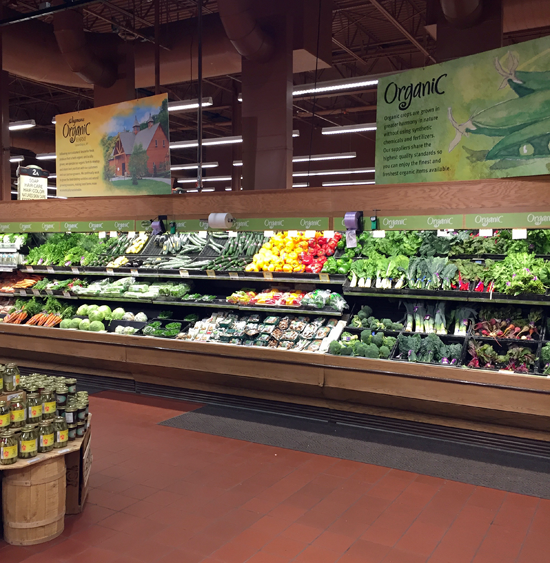 This photo was shot in the produce department of a Wegmans supermarket. The author photographed organic vegetables after they have been cleaned.

Is organic food better for you?

Sat, Apr 21st 2018 11:05 am
By Dominick Trippie
Special to Niagara Frontier Publications
Lauren Krafft, a worker in the produce department at Wegmans, has noticed an increase in organic sales over the past few years. After six years of working with all different produce, she considers herself an expert on different types of produce preparation techniques and their various tastes.
"Organic fruits and vegetables are obviously more expensive than conventional produce, but sometimes they are not even worth the extra price," Krafft explained. "But in some cases, I would deem organic produce a must-have over conventional produce."
Many consumers base their food purchases on what is better for one's health. They believe that, by eating "healthier" foods, they will become healthy. But that is not always the case.
Nutritionists often come out with a new "superfood" that is supposed to be "super good" for one's health. Oftentimes, this endorsement is recanted or changed a few months later.
"I choose organic, because I like knowing for certain that my food - especially produce - has not been treated with any inorganic chemicals, dyes and pesticides that may do more harm to my body than good. Typically, organic food is produced more holistically and earth consciously, as well, and I like knowing that the food that I am consuming is not harming the sustainability of our earth," said Kim Moss, a Wegmans shopper. She said she is a strong supporter of buying organic food.
Organic food is not a new trend, but there are new theories testing whether organic food is any better for someone then non-organics.
The Department for Environment Food & Rural Affairs defines organic food as, "the product of a farming system which avoids the use of man-made fertilizers, pesticides; growth regulators and livestock feed additives. Irradiation and the use of genetically modified organisms (GMOs) or products produced from or by GMOs are generally prohibited by organic legislation."
Organic fruits and vegetables are naturally grown and are not contaminated by chemicals that help the growing process. Organic protein is very similar, as it comes from animals that are not fed antibiotics and/or growth hormones. Lastly, organic milk contains more heart-healthy Omega-3 acids than conventional milk.
So why do people buy organic? After interviewing various Wegmans shoppers, there seemed to be common themes. As stated earlier, Krafft said, "In some cases, I would deem organic produce a must have over conventional produce." But what are these special cases?
Produce worker Steve Matthews, explained "There are 12 fruits and vegetables that shoppers should buy organic, because these are the most contaminated produce." He was referring to contamination by pesticides and man-made fertilizers. According to CBS, the 2018 "dirty dozen" includes: strawberries, apples, nectarines, peaches, celery, grapes, cherries, spinach, tomatoes, sweet bell peppers, cherry tomatoes and cucumbers.
Consumer Reports compared the prices of organic vs. non-organic food, and the results were not shocking. After surveying different retailers, Consumer Reports stated the following: At Whole Foods, bananas are .79 cents per pound, where as organic bananas are .99 cents per pound. Chickens are 2.49 per pound, whereas organic chickens are 3.49 per pound.
In fact, there was no organic food on the list that costs less than conventional.
Moss said she believes higher prices for organic food is to be expected.
"With that being said, I would much rather pay the higher dollar for a better product," she said. "For me especially, I choose quality organic food over commercial snacks, candy, etc. Also, I would much rather pay for food without chemical treatments that produce harmful side effects rather than pay long-term for prescriptions or be diagnosed with a disease in the future that may be linked to harmful chemicals in food, produce and meat."
Wegmans shopper Gina Trippie said, "I don't take into consideration the extra money spent on organics, because I enjoy knowing where my produce comes from and how it is made. I believe that is worth the extra money."
While it's true that many shoppers do not mind spending extra money on organic food, some wonder if organic food is more expensive than conventional because consumers are paying for peace of mind.
Lauren McMullen, staff writer for health.usnews.com, stated organic produce isn't any more nutritious than non-organic produce. She cited a study by Stanford University researchers from "A Monday in the Journal Annals of Internal Medicine." The conclusion she found is that organic foods are not healthier, at least in terms of included nutrients and vitamins.
Still, there are advantages to purchasing organic, including knowing where and how produce was grown, limiting the amount of pesticides entering one's body and, as some customers would say, a better-tasting product.
Of course, other consumers will not taste a difference. But The Plate, by National Geographic, said organic food "tastes the way produce should taste." This is because pesticides and other chemicals have not changed the plant. Produce that comes from the earth has a natural taste that many consumers find more appealing then produce affected by pesticides.
This article is part of a college journalism class project and is not intended to endorse any product, nor does it constitute professional health advice. Please consult your doctor before adding or subtracting anything from your diet or workout, and before consuming any item or product listed herein.
Categories
NUsUnlimited NUsUnlimited Top Feature
comments powered by Disqus