'Yu-Gi-Oh!': Journey to becoming greatest of all time

Sat, Apr 21st 2018 10:15 am
How one person manages to triumph over all when it never seemed possible
By Thomas Rowe
Special to Niagara Frontier Publications
It's round one of the Yu-Gi-Oh! Championship Series in Atlanta, and I have been preparing for months - practicing hard. The pairings are announced, there is 1,458 duelists in attendance. Unfortunately, out of all those players, I am facing, the best one: Patrick Hoban, a player who has more tops and wins than anyone else in the entire world.
Considering this is an international card game, having that many tops and that many wins is quite impressive - especially when the second-ranked player only has half the amount of wins. I have no choice in who I am paired against, so I must, while already feeling defeated, walk over to my table number designated for my match against Hoban.
I sit down at the table, pull out my deck, roll the dice to see who goes first and begin to play.
Thirty minutes have gone by since the match has started. Hoban won game one and is probably going to win game two. hE countered my pendulum scales by using wavering eyes, giving him four cards while taking away three of mine. I felt as if there was nothing I could do.
At least 20 people are standing around, watching the match. This is a pressure most would not be accustomed to, and I am no exception. Hoban finishes me off with flawless  technical play. He wins the match and goes on to round two, where he will continue to be viewed as an impossible obstacle to each and every opponent he faces.
"Yu-Gi-Oh!" involves two duelists facing off in a one-on-one match to demonstrate both their technical aptitude and their creativity in deck building. It is a card game that involves a lot of variance, so consistently doing well is immensely inspiring.
Hoban is, now, one of the most known players worldwide for his accomplishments. However, like anyone else who's a competitor, HE had to work his way up. 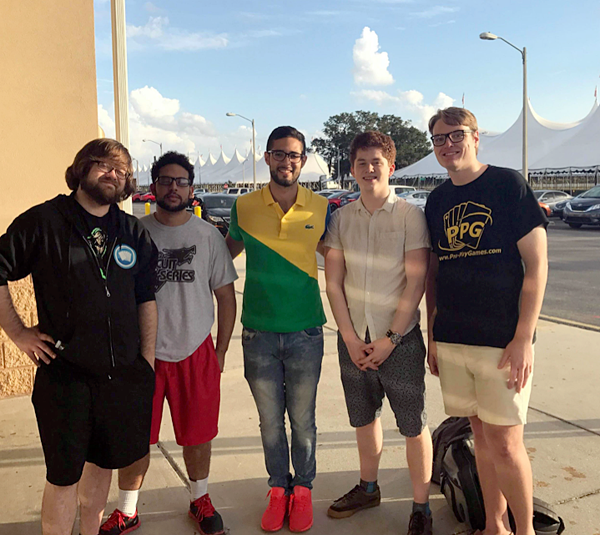 Patrick Hoban (furthest to the right) with some of the most well-known players in the game.
Hoban's grind to become the best first began in 2005, in a way similar to most duelists: not knowing how to actually play. The majority of players who have fallen in love with this game started by watching the anime "Yu-Gi-Oh!" Hoban was no exception. At 9 years old, he would become obsessed, entering any tournament he could.
Although he did not perform well in the beginning that never deterred him.
"I had a villain named Robbie and to me he was the best of the best, constantly beating me - time and time again. However, it wasn't until I was told about metagame.com that I learned he did not even compare to some of the best players throughout the country," Hoban said.
This site, which no longer exists, was the root of Hoban's inspiration. He used it to study some of the best players and their card choices.
Hoban thought he knew even more than the pros and wanted to to demonstrate his skill.
His first regional competition would be located in Raleigh. Mentally, he was a shark; but it was as if he was against lions fighting on land. The majority of players were adults, if not teenagers. For this reason, Hoban finished with a lackluster record of 4-4.
Still, this record was astounding, because almost all players, with the exception usually being one if not zero, would drop at three loses. This is because, with three losses, there is no chance in earning any kind of reward. Time could be much better spent trading cards or hanging out with friends.
Hoban had not known it then, but his record would reflect the passion necessary for years 2011-13.
In his origins article, Hoban said that, following his tough losses, he found comfort in participating through an online community known as Yu-Gi-Oh! ETC. By actively participating in these forums, he obtained confidence and motivation.
Hoban would attend his first premier event, a Shonen Jump, in Nashville in 2010. He was eager to prove wrong anyone who doubted his skill on the local level. His first attempt was more successful than he could have even anticipated, placing in the top four out of 800 players.
Hoban had made a very powerful first performance, yet no one gave him the time of day. They called it a fluke. Feeling more rejected than ever, Hoban would go on to take top 8 at the national championship and top 16 at Yu-Gi-Oh! Championship Series Indianapolis. It was looking like Hoban was on track to being a well-known and respected player.
Hoban decided after these successes that he was going to fully commit himself. It seemed like becoming a professional player was within arms reach. He started attending every event for the next year, practicing for each tournament with any amount of free time available.
His first event was YCS Dallas. Hoban put up a fight and went 6-2 to continue playing the next day, but barely scraped by. He would lose the first round of the following day and be knocked out of the tournament. At the second event, Hoban was knocked out early in the tournament - again not topping a competition. Six more events occured, and Hoban had still not topped an event since YCS Indianapolis. He wondered how it could be possible. However, still dedicated, he decided to play in the eight events again the following year.
"I never saw anyone with that kind of commitment or dedication to anything. Trips are not cheap, so it's very surprising," three-time YCS champion Chris Leblanc said.
Although Hoban was still practicing just as much as he had for the three events he topped, he still could not manage to break through. Hoban would not make a top cut appearance at any of the 16 events he attended over a two-year period. In Hoban's arg feature, he would write that trying to understand the experience was impossible. But he was not discouraged and continued to practice.
Hoban was in a crippling state, financially. He only had enough to travel to one more event. There, he would get top 16. The prizing was enough for him to afford attending another event. Hoban was tops again, and the cycle continued. He went on to top 20 events between 2013-15, winning seven. It did not make any sense, and many people wondered what could have changed.
The conclusion was simple.
"I think he had the mentality that there would always be another event to go to, but when there wasn't that possibility he felt more inspired," said close friend and previous arg champion Nate Forte.
Hoban agreed with this conclusion. Not knowing what could be his last event triggered an incomparable work ethic and mindset when it came to the game of "Yu-Gi-Oh!"
Hoban has continued his success in recent years. He has written about how he practices. His book, "Road of the King," on how to get better at "Yu-Gi-Oh!" is available for purchase through Amazon. For those looking to improve, this is essential to player development.
Categories
NUsUnlimited