Sat, Apr 21st 2018 09:45 am
How 'Fortnite' has affected the lives of millions of people
By Bautista Pedezert and Jake Hendry
Special to Niagara Frontier Publications
Epic Games released a game to the public not knowing how it would go over. Battle royale games have been on the market for a long time and, while they have been consistently popular, games such as "Players Unknown Battleground" and "H1Z1" have been out for a year or so. Still, Epic Games saw something that was missing.
In the last five months "Fortnite Battle Royale" has gone off the charts. It has become the biggest hit when it comes to video games. The estimate revenue in February alone was $126 million. What makes this number crazy is that the game can be downloaded on one's console for free. "Fortnite" is available on PlayStation 4, Xbox One, PC, and now one can even play it on a smartphone.
The game consists of a similar concept of "Hunger Games," where one fights a battle versus 100 other people and tries to be the last one standing. The game has added many different modes as it has gotten bigger. It has now added a duo gameplay and a squad gameplay, allowing one to play with friends.
Although the game is completely free, one can purchase in-game content such as different outfits and other things that have caught the attention of millions of gamers.
Epic Games, the creator of "Fortnite," has had huge trouble keeping up with the number of people that started playing this game. It is clear that not even the company expected this to blow up the way it did. The game has gotten so populated that the company has had trouble with its servers, and had to shut the game down for hours many times already.
After just six months of availability, "Fortnite: Battle Royale" is the most watched game on twitch, which is the world's largest game-streaming platform. 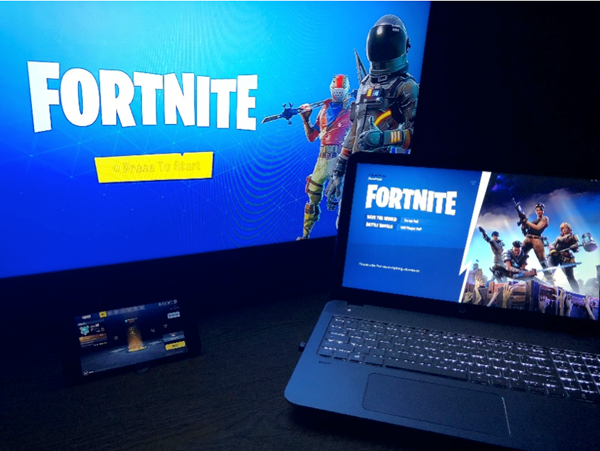 "Fortnite" is taking the gaming world by storm.
This is the first video game that is free and has had the success it is having. In fact, the company has had so much success that it started worrying the bigger competitors in this industry. A normal video game for PS4 or Xbox One averages at $60. Since "Fortnite" has come out, it has been the video game with the most trends on Twitter and the game with the most views on YouTube. The reason for this is who has been playing this game. In the last handful on months, gamers have really hit social media with videos of them playing and doing things that has caught millions of viewer's attentions.
A streamer named Tyler Blevins, or "Ninja," has been the gamer that has changed the face of "Fortnite." He averages millions of views on all his videos and lately has put videos up with stars such as Drake, Juju Smith Schuster, Travis Scott and Marshmello. He is estimated to make a total of $350,000 a month because of his sponsorship with twitch, and through donations and subscriptions to his channel. He has had interviews on CNBC and Forbes talking about not only the success of the game, but himself as a streamer and how he has made a living for himself and his wife.
"Fortnite" has joined iOS this month and has already earned $25 million, making this a record-breaking number. The game has been downloaded by so many people they had to make an "invite-only" restriction meaning one can only start playing the game now if invited by someone else. "Fortnite" has already made an agreement with Android and is on its way to gain more than $500 million with these deals.
"Fortnite" coming to IOS made it more accessible than ever. With it being available on so many platforms, people of all age groups are finding ways to play it and become good at it.
Lauren Wilkie, a junior at the University at Buffalo, has come to be a big fan of "Fortnite" and said she really loved the addition of IOS accessibility.
"I love playing it on my phone," Wilkie said. "Console or PC seems too complicated, but with all the controls being in your fingertips, it makes it a lot easier to control and play. They are making it easier for people to get into it and that's what I love about it."
The impact "Fortnite" has made isn't necessarily all good, though. With how much the game exploded, it seems to have a lot of other games overshadowed. People who are popular streamers on Twitch or even YouTube have seemed to lose a lot of viewership depending on their game choice. Streamers of games such as "Call of Duty" or "NBA 2K" have had a huge dip in numbers since the launch of "Fortnite Battle Royale."
A streamer from Syracuse named Adam Kroft, or "Kizzy," was very big on playing "Call of Duty" on his stream. But once he started to realize people seemed to be more interested in "Fortnite," he switched to that and now plays that regularly.
"Switching over wasn't too hard," Kroft said. "I still have time to play other games, but I mainly stream 'Fortnite' due to the viewers I get, compared to when I play other games."
Epic Games has had a lot of success in a small amount of time. It is safe to say that it didn't see this coming. With all its "overnight success," people are wondering how the company is handling it. Forbes talked to "Ninja" on some aspects of the game and how game developers are working.
"Their heads are in the right place, they're keeping their heads down and just drilling it, just going," he told the news outlet.
Typically, it is tough to continuously work as hard as Epic Games has, especially with the amount of success the company has had in the last couple of months. One sees games or even people with overnight success and they keep it at that, but the people at Epic seem to keep striving for more and working even harder than before.
"These guys have the damn goose - they don't have the golden egg, they have the goose, and they're popping out golden eggs every other week," Blevins told Forbes.
To an average person, this game may just be another video game, or at least they may have thought that at one point. Nate Kinser, an avid gamer, was skeptical on "Fortnite" in the beginning.
"At first, I wasn't exactly certain it was the game for me," he said. "When I thought of 'combat' games, my mind immediately went to franchises such as 'Call of Duty' or 'Battlefield.' I felt myself wanting a COD experience from 'Fortnite' and being put off at first play. After some time interacting with the game, I found that 'Fortnite' was never meant to be realistic combat like those other shooters, but a whole different genre. It is a great change of pace and one that I enjoy."
Categories
NUsUnlimited