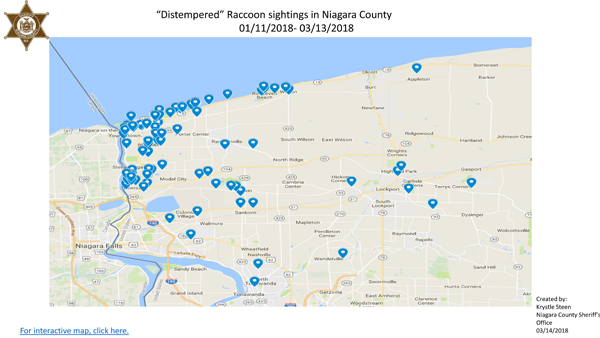 Fri, Mar 16th 2018 08:30 pm
The Niagara County Sheriff's Office and Town of Lewiston Police Department are recommending the community to be on high alert after identifying multiple cases of distemper in raccoons in Niagara County.
There have been more than 90 calls of sick raccoons since Jan. 1. The primary area of outbreak appears to be northwest Niagara County - in particular, the towns of Porter and Lewiston. There have been no reported cases in the City of Niagara Falls.
Raccoons can be infected by both canine and feline distemper. Although they both can cause acute illness and death in the raccoons, they are caused by two completely different viruses.
Canine distemper is a highly contagious disease of carnivores caused by a virus and is common when raccoon populations are large. Feline distemper is an acute, highly infectious viral disease.
Canine distemper in raccoons starts slowly, initially appearing with a runny nose and watery eyes. In its final stages, the raccoon may begin to wander aimlessly in a circle, disoriented and unaware of its surroundings. The animal may exhibit other bizarre behavior as a result of brain damage.
Feline distemper in raccoons begins suddenly with a high fever, followed by vomiting and diarrhea. The course of the disease is quick, usually a week, with nearly 100 percent mortality. Insects may play a role in the transmission of the disease.
Prevention
Unvaccinated dogs and cats that are allowed to wander unattended are at risk of infection. Humans are not at risk from distemper, as the disease cannot be passed on to people and presents no danger to humans. Dog and cat owners should make sure their pets have been vaccinated for the disease.
The Niagara County Health Department stated the last positive test for rabies in the county was Oct. 20, 2016. In 2017, 145 samples were tested and all were negative. In 2018, there have been 18 samples tested so far and all were negative for rabies.
If you see a raccoon acting in a suspicious nature, stay away for the animal and make contact with a nuisance wildlife control agent to assist you with the incident. A list of agents and their telephone numbers is below, to assist you in making contact with the appropriate agent for your area. 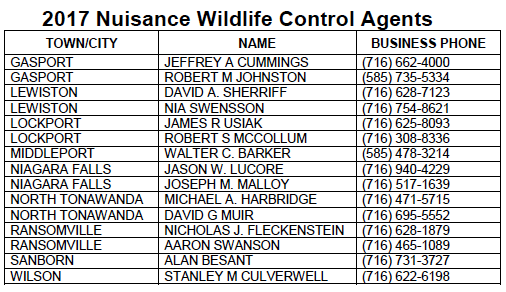