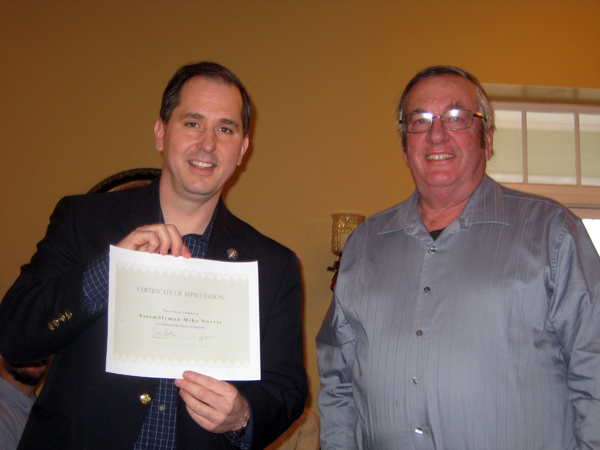 Wed, Dec 27th 2017 12:25 pm
At the recent Niagara County Farm Bureau luncheon, President Jim Bittner presented New York State Sen. Rob Ortt, Assemblyman Mike Norris and Assemblyman Angelo Morinello with the Circle of Friends Award. This honor is given to legislators whose votes reflect New York Farm Bureau's priorities.
Each legislator had the opportunity to interact with the County Farm Bureau members during lunch. Afterward, each was given the opportunity to address the group. They expressed appreciation for the help in learning about the agricultural issues and cited the legislative victories for agriculture this year.
Organizers said the inherent risk law was foremost on everyone's mind. Ortt pointed out the economic influence agriculture has in the state. Norris said he appreciated the farm tour that educated him about the diversity of agriculture in Niagara County. Morinello observed he didn't have as large an agricultural base as the others, but sought to do everything he could to help those in this area.
On March 5 and 6, 2018, Niagara County Farm Bureau members will go to Albany for PX (Policy Execution) Days. That Monday evening, foods produced in New York will be served at the opening reception. On Tuesday, members will visit their local legislators and their adopted legislators. These are people who do not have agriculture in their district and would like to learn more.
Farm Bureau membership is open to all. Active farmers join for the lobbying efforts. Associate members can be those who are a generation or more away from the farm or anyone who understands the importance of local food production.
The mission of New York Farm Bureau is "To Serve And Strengthen Agriculture." Farm Bureau's "grassroots" policy development process continues to ensure the organization represents the majority position of its membership. Policy development begins at the county level with problem identification and culminates at the New York Farm Bureau annual meeting with resolutions addressing the issues.
For more information, call 735-7791 or email [email protected].
Categories
NFP Sentinel Sentinel HP Feature List Top Around WNY Feature