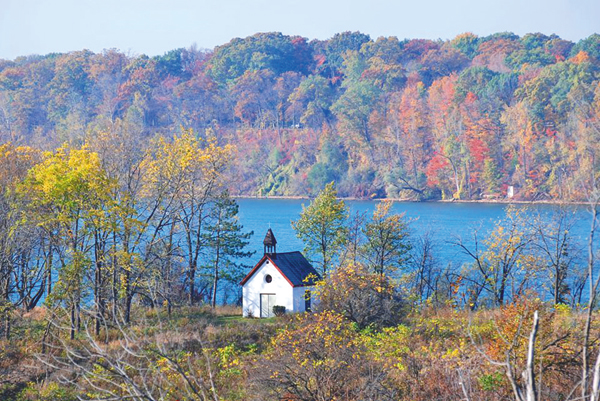 The Stella Niagara Preserve, as seen from Lower River Road.

Sat, Dec 2nd 2017 09:50 am
Buffalo Niagara Waterkeeper has announced completion of phase one of a restoration project at the Stella Niagara Preserve's landing in Lewiston.
Once fully complete, the project at Stella Niagara will include a kayak and canoe launch site, educational signage and improved waterfront access for the public. Habitat enhancements will also be incorporated, which will improve water quality and shoreline stability, while providing important fish and wildlife habitat.
Phase one work completed to date includes the removal of concrete rubble along the shoreline; the construction of a canoe and kayak launch; the establishment of protected shallow-water areas to provide resting, spawning and nursery habitats for fish, while also attracting migratory songbirds; the restoration of water flow to allow filtration before it reaches the river, and creating connectivity between the land and the water for amphibians, invertebrates and other species; and improvements to the walking trail.
"Shallow water and coastal wetland areas have been highly degraded within the Niagara River corridor," said Emily Sadowski, senior program manager at Buffalo Niagara Waterkeeper, citing an 80 percent-plus loss of this habitat. "Combining public access with the restoration of this habitat type is a win for the community and helps advance progress on many local and regional plans."
This coming spring, the final phase of the project will continue with the planting and seeding of 125 native shrubs, grasses and wetland plants at the site, creating improved aquatic or near-shore habitat, in addition to the placement of educational signage.
The Stella Preservation restoration project is in partnership with Buffalo Niagara Waterkeeper and the Western New York Land Conservancy, with funding provided by Yahoo Community Grants under the direction of Empire State Development.
"The Stella Niagara Preservation restoration project aligns directly with the strategy Gov. Cuomo has pursued for the region by making the waterfront accessible to all," ESD President, CEO and Commissioner Howard Zemsky said.
One of the few natural landing sites between Niagara Falls and Lake Ontario, the Stella Niagara Preserve is a 29-acre property in the Town of Lewiston. The preserve, which is owned by the Western New York Land Conservancy, is a link in the Niagara River Greenway and Olmsted's proposed necklace of open spaces along the Niagara River. The shoreline restoration is part of a larger effort led by the Western New York Land Conservancy to restore and enhance rare and declining ecosystems within the preserve. Other restoration efforts in the preserve include invasive species removal, the creation of a native plant grassland, an oak savanna, a sedge meadow wetland, and restoration of a degraded natural spring and creek.
"The Land Conservancy is grateful for our partnership with Buffalo Niagara Waterkeeper," Executive Director Nancy Smith said. "This restoration will make the Stella landing an even more inspiring place for people to reconnect with nature."
Stella Niagara is the first nature preserve on the Niagara River to be owned and operated by a not-for-profit organization. Historically, Stella Niagara was a landing site for the British during their invasion of the U.S. in the War of 1812. Archeological evidence also points to Stella Niagara as an important canoe landing site for the Haudenosaunee and other Native American people.
The Western New York Land Conservancy is a regional, not-for-profit land trust that permanently protects land with significant conservation value in Western New York for future generations. The Land Conservancy envisions a future in which open spaces, working lands, wildlife habitat, and scenic beauty are cherished and protected as part of the landscape and character of Western New York. The Land Conservancy is accredited by the Land Trust Accreditation Commission and is one of 1,700 land trusts nationwide, including 90 in New York. Land trusts have protected 40 million acres over the past 20 years.
For more information about the Stella Niagara Preserve restoration project, visit https://bnwaterkeeper.org/projects/habitat/habitat-restoration-projects/stella-niagara-shoreline-enhancement/. For more information about Buffalo Niagara Waterkeeper, visit https://bnwaterkeeper.org/.
Categories
Home feature NFP Sentinel Sentinel feature Sentinel HP Feature List Top News Features
comments powered by Disqus