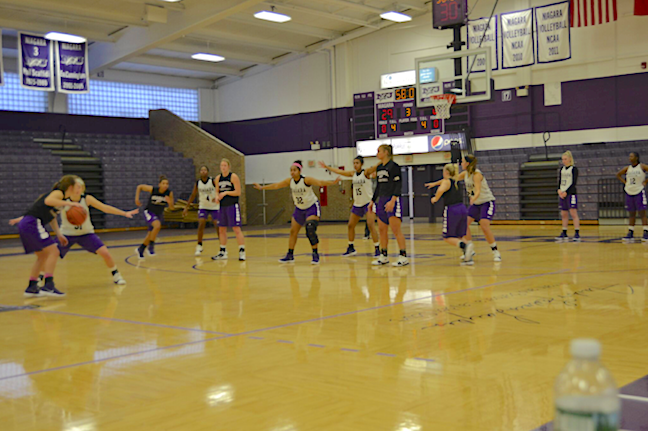 Fri, Dec 1st 2017 07:00 pm
By Jewell Eason
Game day for a Purple Eagle is one of the most fun days of the year. The practices, the warm-ups, exercises and team lifts are strenuous and hard, but it all pays off for that one day. Game day.
Each game has a new preparation; you can't think about the past, but only the future. The last game does not matter - whether it was a win or a loss. The next game is the most important game of them all.
The Previous Game
It is Tuesday, Nov. 28, and the Niagara University women's basketball team just came back from a needed vacation in Nevada. The Purple Eagles won their first game at the South Point Shootout in Las Vegas. During this trip, they played two games, one against the University of Louisiana at Lafayette and the other against Louisiana Tech. After a strong fight against Louisiana, the Purple Eagles lost the game, 68-52. The Purple Eagles won their next game, defeating Louisiana Tech, 73-67. 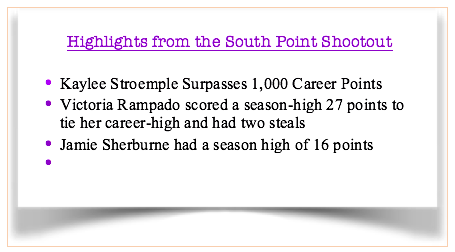 Special to Niagara
The week before the trip to Las Vegas, Assistant Coach Erika Harris came up with a new idea to get the team motivated to do better during practice. The team had lost a few games, and players were down on themselves and needed some inspiration.
Harris suggested a competition among the team for practice itself. For every drill that was completed in a specific amount of time and was executed correctly, the team wins that drill. If the team does poorly on a drill and it takes them a long time to perform it correctly, then the team loses that drill. If the team has more wins than losses in a single practice, then players have had a good practice. If the team loses that specific practice, then players have to run suicides, which encourage them to do better next time.
This method of practice worked tremendously for the team because, in the next week, they Purple Eagles won their first game!
First Practice Before a Game
Tuesday's practice was originally scheduled for 5:30 p.m. but Coach Jada Pierce told the players they needed to watch film at 5:10 p.m. Film is not just to watch what the team did the last game, but also to see what the opponent is doing.
The players watch film in the team room for about a half hour then practice starts. 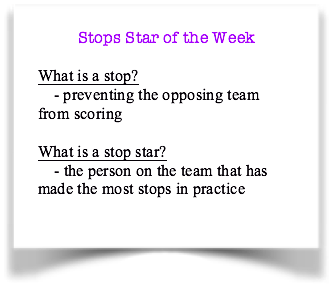 Warm-Ups
Practice always starts with a 15-minute warm-up stretch. The girls line up, turn on the music and start their stretches. Then they all get together and have a pep talk. This usually consists of the seniors, Jamie Sherburne, Victoria (Tor) Rampado and Kaylee Stroemple, telling everyone it is going to be a great practice and how to make this one better than the last.
Then the girls begin to clap, over and over again, while running to the center of the court. There, they are greeted by the coaches. Then, as everyone is clapping, one of the girls shouts "3 - 2 - 1!" On one, everyone simultaneously stops clapping, leaving a powerful tone. The next voice heard is Pierce's.
Since it is the first practice of the week, she starts with this week's "Stops Star of the Week." This week's rising star was Kaylee, who had a total of 37 stops, three charges and one block. Kaylee is now the keeper of the stops glove and gets a piece of candy for her work.
Next, Pierce gives the team an encouraging quote of the day and relates it back to practice and how the team can do better.
Practice Starts
The coaches set up multiple drills for the players to do each practice on their practice schedule. The schedule tells what drill the team will be doing and for how long they do it. The team usually does about five to 10 different drills, then players do scout.
Scout
The coaches all track their upcoming opponent. They study the other teams' games and track which players to watch during the game, so the players know what they are up against. During scout, the coaches tell the players some of the other teams' plays and they practice against each other.
The coaches divide the girls into two teams and one is offense (usually depicting their upcoming opponent) and the other is defense. The defense now tries to figure out what works best for them against the offense.
This type of thing is normal for college level sports and many teams scout either by going to the games or through looking at film.
Practice Results
Today, the team won practice by winning all the drills and went undefeated.
Wednesday's Practice
Practice was held at a different gym due to the men's team having a game against UB. Practice was similar to Tuesday's practice. The team stretched, the coaches said the quote of the day, and the players went through multiple drills. The coach held practice for an extra 30 minutes, because Tuesday was a shorter practice.
Unfortunately, the girls lost this practice with a score of 7-6, and also had multiple turnovers. They plan to do better on Thursday so that they can win practice and be prepared for the game on Friday.
Thursday's Practice
The girls won practice on Thursday, 8-4, which was a huge victory for them. Practice was just like every other one. The only difference is the team was preparing for both the Cleveland State game for Friday and the game against Hartford on Sunday.
During the scout drill, players learned plays from both universities so they could find the best defense and offense.
Thursday was an amazing practice and the team is ready and prepared for the next games ahead. Everyone went home, had a great meal and a good night's rest so they could be ready for tomorrow's game. 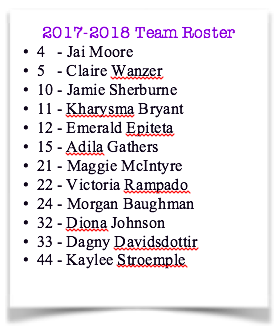 How the Team Feels
"Excellence is key. We tell the girls to strive for excellence, because we want them to succeed not just on, but off the court, too. The coaches know they can win these next games and we want them to see in themselves what we see in them," Coach Lib said.
"The team has struggled with the first few games, but I can see that we are getting better," Diona Johnson said. "We try to focus on the next game and not the ones in the past. We can only learn from our mistakes and hopefully carry that knowledge into the next game."
"We have gotten better. Each game we took steps forward with what we were doing," Pierce said at purpleeagles.com.
Game Day
It's Friday. The girls wake up excited for what the day brings and the big win they are projected to get against Cleveland State. Each person has a nice breakfast, then they all meet together in the gym for an 11 a.m. shoot-around. During the shoot-around, the team goes over plays and practices the scout. The girls leave, shower, eat lunch together and prepare for the game.
4:30 p.m., the team comes back to the gym and starts shooting around, getting dressed and just having fun as a team.
5 p.m., the mood shifts and the coaches and players become serious about the game that is coming up.
5:45 p.m., Tor is usually the first one on the court and practices a layup to the basket with Coach Lib for about 10 to 15 minutes.
6 p.m., the warm-up officially starts and the entire team is on the court.
6:30 p.m., the team goes into the locker room to have a pep talk.
6:45 p.m., the entire team, managers and coaching staff go to the court to prepare for their win.
7 p.m., the buzzer sounds and the game begins.
It's game day.
Check out more action from the team and find their game schedule at: www.purpleeagles.com.
Categories
NUsUnlimited