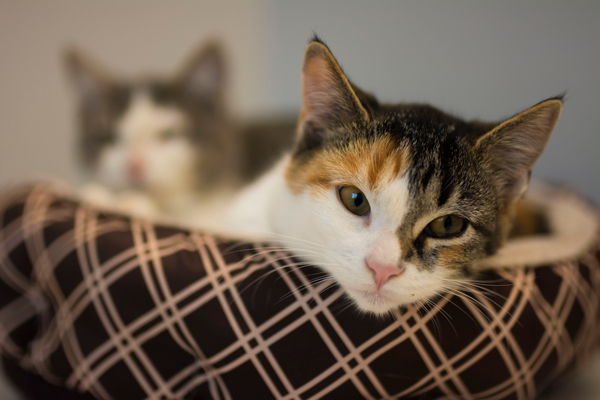 SPCA: Give gift of a home this Christmas

Fri, Dec 1st 2017 09:15 pm
Newest SPCA Serving Erie County location hoping to spread word this holiday season
By Nina Grenga
While everyone gets ready to reunite with family this season, we tend to forget how important having a family really is. At the SPCA Serving Erie County, volunteers get to witness new families being brought together everyday.
Chief Communications Officer Gina Browning has been a member of the SPCA for more than 27 years. In that time, there have been many encounters that have stuck with her, but one story about an abused greyhound always comes to mind.
On March 15, 2005, Samson was brought in to the SPCA in critical condition. He was extremely dehydrated and starved, and had wounds covering his entire body. When police originally found him, they had no idea he was even alive due to his skeleton-like appearance. Once they saw his tail wagging as best as it could, they immediately brought him into the SPCA.
For two weeks, no one was sure Samson would survive. His story touched hundreds of people in the community, and from all over the country. There were constant donations and well wishes for him as he recovered.
With the help of veterinarians, and volunteers such as Joe Chauby, Samson was always in good spirits despite the long journey to recovery.
"He's a very special dog, and there's always going to be something special about him," Chauby said.
Eventually, Samson found his forever home with Linda Mecca, who had actually heard his story on the news. The Mecca family, which resides in Olean, had just lost a pet greyhound when members heard the story of Samson. 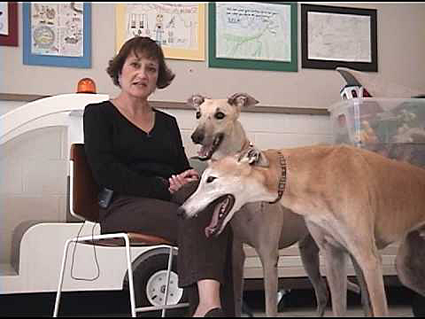 Linda Mecca with Samson (middle) and Rover (right).
Mecca had not been familiar with the SPCA Serving Erie County but, once she made the initial phone call about Samson, it became the start of an amazing relationship with the facility.
Samson continued to visit twice a year until his passing two years ago.
"It really restores your faith in people," Browning said. "Communities all over were brought together with so much love for this dog." 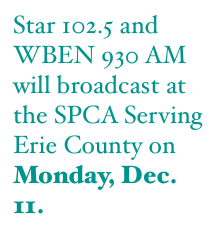 With the holidays quickly approaching, the SPCA is excited to host a radiothon benefit on Monday, Dec. 11. Both WBEN 930-AM and WTSS 102.5-FM ("Star 102.5") will broadcast the event from inside the SPCA. Not only is the event fundraising for the facility, but it also gives people the opportunity to express why they appreciate the SPCA and share personal stories.
As well as listening in, everyone is encouraged to come to the facility to meet their favorite radio show hosts and, more importantly, meet the animals available for adoption. Tune in and help support the SPCA and give the animals a chance to be heard. The radiothon will run from 6 a.m. to 7 p.m. 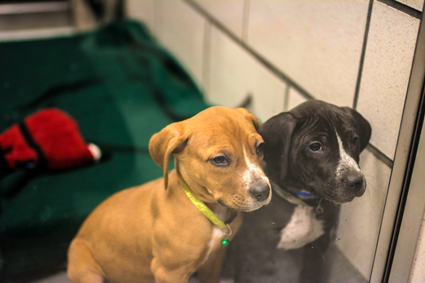 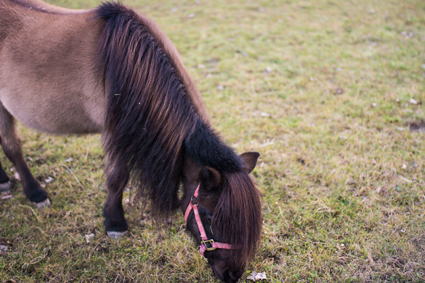 The SPCA Serving Erie County celebrated its 150th anniversary in April. As successful as the SPCA is, it's safe to say it has not always been the easiest road getting there.
"I think it's really important for people to understand that we are a totally independently run facility; all of our funding is completely from donations." Browning said.
With no money coming from the government and no money coming from tax dollars, the SPCA survives solely through the generosity of the community. The SPCA is a local humane society and has no affiliation/ financial support from any other animal welfare association, such as the ASPCA.
Despite financial challenges over the years, the SPCA Serving Erie County has recently expanded. A month after celebrating its anniversary, the SPCA opened the doors to a new, state-of-the-art facility at 300 Harlem Road, West Seneca. This new establishment consists of large departments for dogs, cats, reptiles and even a barn for goats and miniature horses. The facility is one of the rare humane societies provided an on-site surgical suite for animal sterilization, surgery and general safekeeping.
Browning said the number of volunteers topped 1,000, with local members of the community helping with the facility. 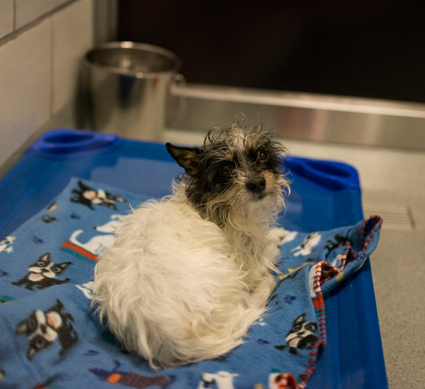 If you are interested in adopting a pet, the hours for the new SPCA shelter are:
All available animals are also posted online to view. When adopting an animal, one is required to sign a contract that ensures one will take proper care of the animal.
Adopters must be 18 years or older when adopting a pet, and must have viable identification and proof of address in order to proceed. There are adoption fees, which vary by animal, but include:
Adopters receive three weeks of unlimited email access to the SPCA's behavior and training department, plus a free bag of Purina dog or cat food (while supplies last).
Staff members will be able to assist adopters before and after an adoption.
If you would like to help the SPCA without adopting, there are plenty of ways to do so. Donations do not need to be any certain amount, as every dollar counts.
Adults and children alike often create their own fundraisers, and not every donation has to be financial. Any kind of pet supply is appreciated, as is one's time. Spending time at the humane society can make a huge difference in the lives of both volunteers and the animals.
For more information, visit yourspca.org, call 716-875-7360 or stop into the new facility.
Categories
Around WNY NFP NUsUnlimited Top News