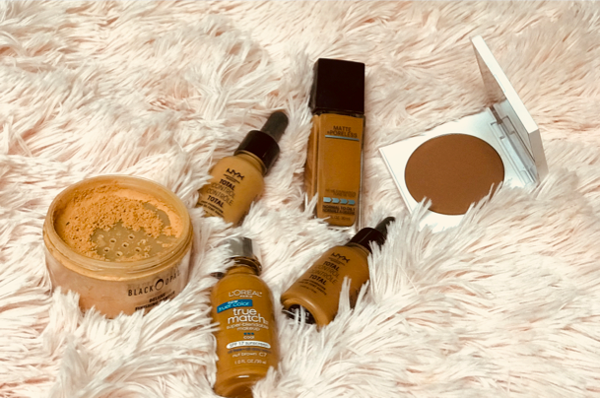 Is the beauty industry including brown girls & boys?

Fri, Dec 1st 2017 03:20 pm
By Alana Leveritte
Let's start with a simple exercise: Take a stroll down the makeup aisle and pay attention to how many brands have shades that will complement the rich skin tones of someone like Lupita Nyong'o, or the caramel tones of someone like Beyoncé. It's a no-brainer that most brands cater to light and tan skin tones, instead of brown and deep skin tones.
Brown- and dark-skinned people have been extremely underrepresented in this community, as if they don't exist. This has been a problem for far too long and its about time that people of color get their due recognition in the beauty industry.
Why is there a Lack of Shades?
Now that we have acknowledged that there is a lack of shade range for PoC, let's discuss why. Many brands state that there isn't a large enough number of black and brown people who wear makeup, so there isn't a reason to make those shades. This claim is incredibly false. There is a huge population of brown- and dark-skinned boys and girls who wear makeup, and are extremely talented, to say the least. There are so many talented artists who don't get the same recognition as everybody else in the field.
The MakeupForMelaninGirls Instagram page showcases and features artists, male and female, from all varying levels of melanin, to give them a chance to become big in an industry that doesn't exactly cater to them. Platforms like these create a community of melanin makeup lovers, as well as inspire those who feel like they don't have a chance.
It has also been stated that darker shades are harder and more expensive for brands to make. Think of an alternate universe where lighter shades are harder to make, so we just didn't make them. Does that seem right to you? 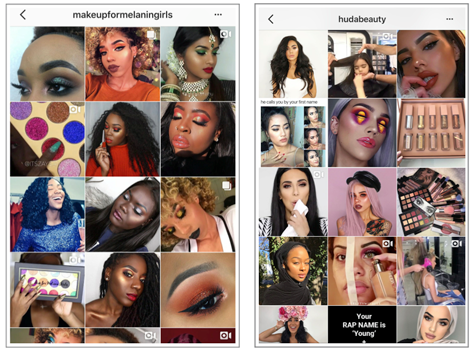 Instagram photos
The Problem with Not Showing Artists of Color
Huda Beauty started as a shout-out-type Instagram page for aspiring artists. The page and its creator has recently been the target of backlash over the lack of PoC who were featured on the page. Whenever someone of color was featured, it was usually for comedic purposes. The country that Huda, the creator of the page, comes from is pretty notorious for not being accepting of other cultures. That doesn't make it OK to exclude a large group of people from recognition.
Even her HudaBeauty brand has fallen under fire. Though her recent release of foundations offered a range of 30 shades, the range could always go darker.
Within the recent months, Tarte Cosmetics was under fire for the release of its Amazonian Clay Stick Foundation. When it released photos of the product online, people were confused. Where were the shades? The shades jumped from fair to extremely deep, as if there was nothing in-between.
"Shades are either too dark or too light. There needs to be one right in the middle," said El'excia Allen, a girl who struggles to find her perfect match.
In September, the founder of It Cosmetics, Jamie Lee Kern, made a speech about inclusivity in the beauty industry. She spoke about how difficult it is to be a woman - and especially a plus-sized woman in this kind of an industry. In her speech, she stated, "I think women are tired of seeing images that don't look like them. When it comes to the images of beauty that see as women, I believe It Cosmetics is proof that the power of the people is greater than the people on power! It's time for change."
Surprisingly enough, in a speech about inclusivity, she left out the struggle of people with dark skin. And to make it even worse, her brand is notorious for having an extremely slim range of shades.
•Watch her speech here: https://youtu.be/tqRw-JSYADc 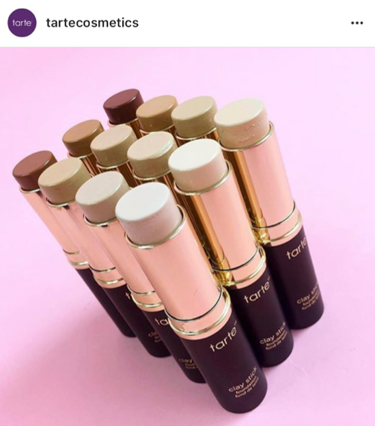 Instragram photo
Are We Making Any Progress?
Thankfully, yes, we are. Brands are finally starting to get the idea that "Hey, I guess there are more skin tones than just beige and tan."
Rihanna has recently launched her Fenty Beauty line, which includes literally everyone, with a range of 40 shades. Her brand has gotten rave reviews since its release.
One customer, Maya Owens, a brown-skinned lover of makeup, said, "I love the Fenty Glow Lipgloss. It has the perfect amount of shine and glossiness. Despite the pinkish hue, it really is a universal nude lip perfect for all complexions."
Another happy, brown-skinned customer, Camrin Brown, raved about how the Fenty line is,"long lasting and looks great. The gloss has a nice subtle shine for all occasions, and it can definitely complete any look. I would recommend that it's worth the money."
In fact, there are so many shades and so many different undertones available that it can actually be hard for dark-skinned people to find their shade! Imagine that!
Many people, myself included, are so thankful Rihanna created this line. It is about time that a line like this created by someone who has such a huge platform like the one Rihanna has exists. Its shows people and especially brands how it's done.
Rihanna even states on her website, "Fenty Beauty was created for everyone: for women of all shades, personalities, attitudes, cultures, and races. I wanted everyone to feel included. That's the real reason I made this line."
•Check out her website to read more about her brand and check out all of her products: https://www.fentybeauty.com
Another brand that has stepped it up with the shade range is Maybelline, a drug store brand! Brands at drug stores are famous for having weak shade ranges and only showing photos of lighter women on their displays. The game changed when Maybelline brought out its Fit Me! Foundations with 32 shades, which, for the drug store, is pretty incredible.
As a fellow makeup lover and proud hoarder of foundations, Maybelline Fit Me! foundation was my first ever foundation. It was the only brand that I could afford that offered an arrangement of shades for my brown skin.
Though we have made progress over the years, its not enough. Too many brands claim their products are made for everyone, but I think it's about time that these brands start practicing what they preach. It's 2017, and I, as well as many others, am tired of not having a seat at the table in the beauty industry.
Categories
NUsUnlimited