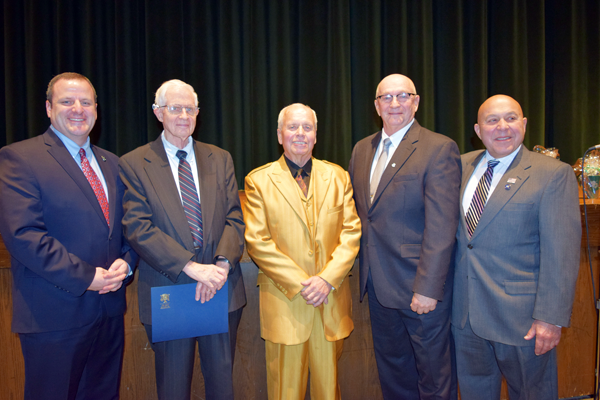 Mon, Nov 20th 2017 03:20 pm
Col. Jeremy Robert Johnson and Village of Lewiston Deputy Mayor Bruce Sutherland were the most recent inductees into the Lewiston-Porter Distinguished Alumni Hall of Fame.
In an effort to honor distinguished graduates, the Alumni Association of Lewiston-Porter has been recognizing individuals who have set themselves apart as leaders in their communities or career field.
Alumni Association President Bruce Newton introduced the two men to the student audience in the high school's auditorium.
Johnson is a graduate of the Class of 1954. He earned his BA from Cornell and, the summer after graduation from Cornell, he went to India for the summer as the year's Lewiston-Youngstown Community Ambassador. Upon his return, he commenced law school and graduated from Duke University of Law as a JD in 1961.
After passing the District of Columbia Bar, he went on active duty in the Army as a first lieutenant, judge advocate general corps. He was stationed in Orleans from 1962-65 for his first duty tour in France. While there, he married and started a family.
Upon his return, Johnson worked for two years as a civilian trial attorney for the general counsel of the Navy in Washington. In 1967, he returned to active duty and worked for a year in the Pentagon until he was assigned to France, where he worked for three for three years at the US Embassy, Paris. In 1971, Johnson went to Saigon where he spent one year in Vietnam and was assigned to CINCPAC (commander in chief, Pacific).
From 1974-75, Johnson spent the academic year at the Army Command and General Staff College at Fort Leavenworth, Kansas. From there, he spent the next five years in Heidelberg as the chief, international affairs division, office of the judge advocate. In July of 1980, Johnson was promoted to full colonel and assigned as the staff judge advocate, U.S. readiness command, MacDill Air Force Base in Tampa. After three years, Johnson was assigned to NATO headquarters in Brussels, Belgium, as the legal adviser to the U.S. Military Committee. In 1986, he was assigned as the staff judge advocate to CENTCOM (U.S. Central Command) also at MacDill, Air Force Base. Johnson's final Army assignment was a senior appellate judge on the Army Court in Washington reviewing criminal cases.
In 1993, he retired and moved to Sarasota, Florida, where he currently resides.
Sutherland is a graduate from the Class of 1964. He was a Regents Scholar and attended Niagara County Community College, where he earned his associate's degree in 1966. He continued on to Geneseo, where he received his Bachelor's Degree in 1969. Sutherland served in the Air Force with high distinction for 26 years until his full retirement as colonel in 1995. He was a pilot of both propeller and jet transport planes and retired with more than 6,000 pilot hours, including flights to and from Vietnam. Prior to his retirement, Sutherland was commander of the 463rd Tactical Air Wing at Dyess Air Force Base and commander of the 7th Bomber Wing, consisting of C-130s, B-1s and T-38s.
Following his retirement from the U.S. Air Force, Sutherland continued flying as captain of Boeing 737 jets for Southwest Airlines, adding more than 8,000 additional flying hours to his already distinguished career. He retired from Southwest Airlines in 2006 and moved back to his hometown of Lewiston, where he quickly became involved in a variety of civic activities, including serving as the president of the Historical Association, as president of Niagara Frontier County Club (Golf Club), and being a founding member of the Lew-Port Alumni Association.
Sutherland served as a Village of Lewiston Planning Board member before being appointed (and re-elected) trustee and deputy mayor.
Categories
NFP Sentinel Sentinel feature Sentinel HP Feature Picture