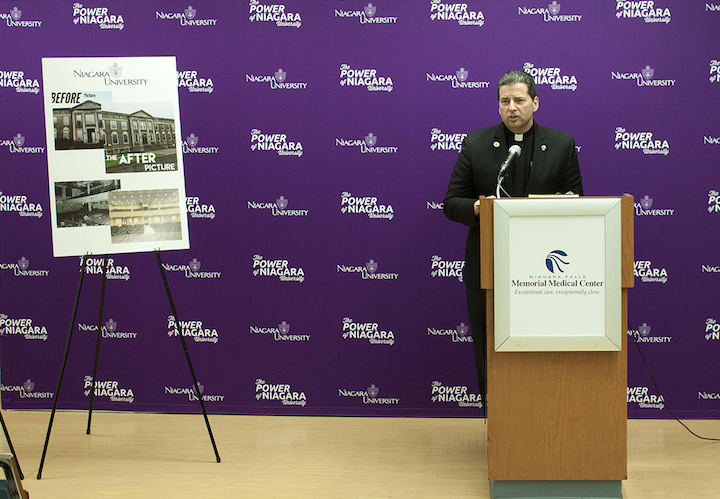 Thu, Nov 16th 2017 09:00 pm
A brighter future is ahead for the south end of Niagara Falls, according to revitalization plans announced Thursday by Niagara University, the City of Niagara Falls and several community partners.
The university's Rev. Joseph L. Levesque, C.M. Institute for Civic Engagement is leading a charge to convene several community entities in an effort to rehabilitate dilapidated housing and expand the potential for mixed-use development in designated areas of the city.
The Rev. James J. Maher, C.M., Niagara's president, said the university is fundamentally committed to leveraging its resources and encouraging key community partners to pledge theirs as a collective means of methodically reinvigorating Niagara Falls' main economic corridor.
"This project, consistent with our Catholic and Vincentian mission, is intended to represent a seismic shift in improving communities for our great neighbors in Niagara Falls," Maher said. "We are excited to collaborate with Mayor Dyster, as well as local businesses, organizations and city residents, to buoy the economic, educational and social stability of this area."
A U.S. Census Bureau report indicated 42 percent of people in the 14301 ZIP code were living in poverty, the most in Niagara County and among the highest rates in the state.
"Time is critical to elevate the housing stock in the south end to complement and support current and committed economic development efforts in the area," noted Patti Wrobel, executive director of the Levesque Institute. "We are absolutely intent on working with so many of our community partners and residents to recreate vibrant neighborhoods in Niagara Falls."
The three-phase model of collective impact, incorporating 25-plus partners, will restore housing from Fourth Street to Portage Road, within the surrounding perimeter from Niagara Street to Pine Avenue. Organizers contend the refurbishment of this corridor of homes will enhance curb appeal for potential homeowners and investors, thus spurring economic development in the city's south end.
"At the core of our collaboration is our recognition that the three pillars for a region's economic growth and stability are housing, education and health care," said Joseph A. Ruffolo, president and CEO of Niagara Falls Memorial Medical Center, which hosted Thursday's press event. "Between the university and the medical center, we have the first two pillars in place. We are now pleased to join with other community partners to address the third."
Among the many 2018 initiatives that are already planned as part of the program are a Niagara University Freshmen Day of Service that will clean up the south end's business district on April 21, 2018; a May 16 "Rock the Block Day," which will mobilize crews to overhaul facades and landscaping from Fourth Street to Eighth Street; and an analysis of vacant or dilapidated properties that could be fixed up and sold to employees of some of the area's largest employers, such as Niagara Falls Memorial Medical Center, the Niagara Falls City School District, Seneca Niagara Resort & Casino and Niagara University.
To learn more about Niagara University, visit www.niagara.edu.
Categories
NFP Sentinel Tribune Tribune HP Feature Picture